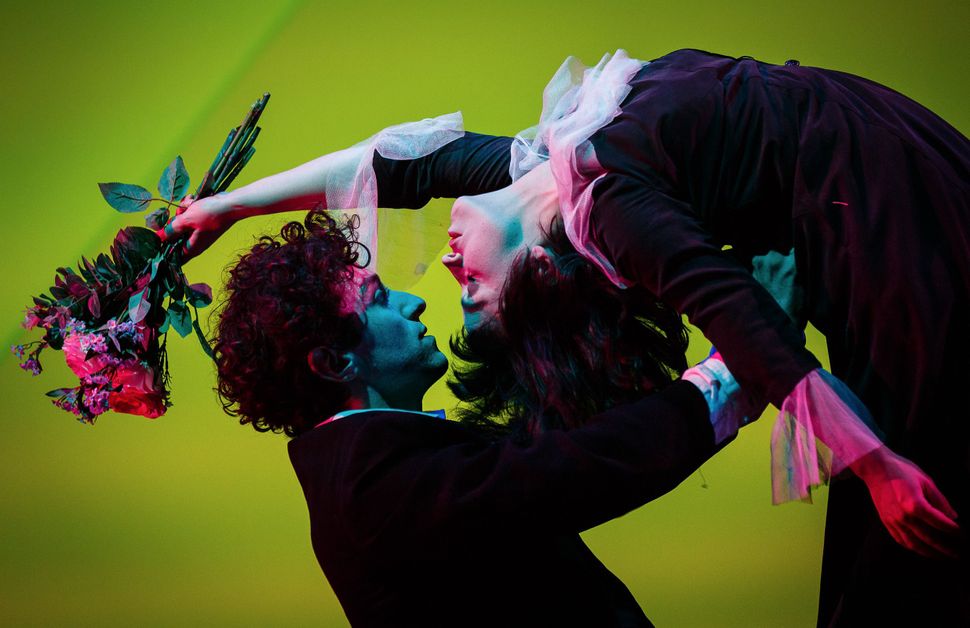 Theater director Emma Rice excused herself for being rather emotional. Her cast had just completed its first run-through of “The Flying Lovers of Vitebsk,” and she said the experience had left her slightly at a loss for words. “I’m sort of in love with it at the moment,” she said, laughing, “so I have no critical faculties at all!”

The play, written by Daniel Jamieson, traces the relationship of Marc and Bella Chagall. It explores the tensions and demands of their artistic and emotional lives together. On canvas they are immortalized as the picture of love and romance, despite the fact that they were caught up in the horrors of 20th-century Europe: the Russian Revolution, two world wars, persecution and exile.

Chagall was a pioneer of modern art whose vibrant, dreamlike style fused everyday settings — inspired from his hometown in Vitebsk — with mystical lament. His symbolic imagery conveyed love, loss, exile and survival.

We sat in the play’s London rehearsal studio space, just a minute’s walk from Shakespeare’s Globe Theatre. The sloping stage was in front of us, reminiscent of the sloping roofs often depicted in Chagall’s paintings. On it, scattered objects — shoes, books, a suitcase — mimicked the painter’s floating style, and symbolized the multiple journeys that defined Marc and Bella Chagall’s lives.

There was a noticeable lack of rigging or harnesses. Although Chagall’s figures tend to defy gravity, Rice wanted the show to be quite natural in conveying the physical language of the paintings. Weightlessness or lightness was achieved purely through unaided body movement.

The show opened at Bristol’s Old Vic in late May as part of the theater’s 250th anniversary, before its run at the Globe’s Sam Wanamaker Playhouse. This setting, with its candlelit chandeliers and wooden-seated galleries, resembles the interior of the former Princelet Street Synagogue, in London’s East End, Rice says. The play then will tour to venues on the South Coast of England. The production forms part of Rice’s inaugural season as artistic director of the Globe.

“The Flying Lovers of Vitebsk” is the reworking of an old project, initially written over 20 years ago when Rice and Jamieson were in a relationship. It was then titled “Birthday,” after the 1915 Chagall painting of the same name, also known as “Anniversary.” Jamieson played Marc Chagall, and Rice was Bella Chagall. “We were two very young people, very much in love, [in a play] about two people in love, and it was magic,” Rice recalled. “I woke up a couple of years ago — we were no longer together — thinking I’m at that middle point in my career where you [ask], ‘Why do I do what I do? How do I keep it fresh and meaningful?’ I thought, wouldn’t it be amazing to go back to the show as older people, as artists who know a bit more, and remake it.”

Later, over the phone, Jamieson told me that he and Rice had been inspired by a visit in 1990 to Poland, where they had participated in workshops given by Gardzienice, the Center for Theater Practices. Gardzienice’s style was a mixture of incredible physicality — airborne movement — and language and song. “I think that the force of this work lodged itself in our hearts. It seemed there was an affinity between Gardzienice and the paintings of Chagall. To us, the paintings were so intrinsically theatrical,” he said.

During the trip, they traveled with Gardzienice’s actors to the remote border areas between Poland and Belarus, not far from Vitebsk. They saw the remnants of past shtetl life — wooden buildings and horse-drawn carts. These were motifs used in Chagall’s pictures, but Jamieson was particularly struck by the absence of Jews and Jewish culture apart from “a few very sad fragments of tombstones.” Neither Jamieson nor Rice is Jewish, but they share a fascination with Jewish history and culture.

Fortunately, he said, both the Chagalls wrote vividly about their lives, and so he was able to adapt and channel some of the written eloquence for the stage. “There’s a kind of synthesis — the way they write is almost like Chagall’s paintings in words and also [akin to] extended lyrical love poems,” he said.

Bella Rosenfeld and Marc Chagall first met in 1909 and fell in love with each other instantly. In his autobiography, “My Life,” Chagall described their first meeting: “Her silence is mine, her eyes mine. It is as if she knows everything about my childhood, my present, my future, as if she can see right through me. In her memoirs, Bella Chagall, an accomplished writer, also wrote of their first encounter. She recalled that Marc Chagall had “curls all over his head, clustering over his brow and hanging down over his eyes….” She remarked on the blue of his eyes, “as if they’d fallen straight out of the sky….”

In between rehearsals, actors Audrey Brisson (Bella Chagall) and Marc Antolin (Marc Chagall) talked to me about their characters’ brilliance and flaws. The relationship was based on great love, but it was also bittersweet and not without its strains and frustrations. In 1911, Marc Chagall went to Paris to satisfy his artistic ambition, while Bella Rosenfeld remained in Vitebsk. During the three to four years they were apart, she wrote to him regularly but he rarely responded, Brisson explained. They married on his return.

She was a highly intelligent, educated woman who supported Chagall in his painting, often at the expense of her own creativity and desires, she says. There were also issues of class difference, on which the play touches. Rosenfeld came from a wealthy middle/upper-class family, the daughter of a jeweler. while Chagall’s background was one of poverty.

The play is not intended to be a biopic of their lives. Instead, said Antolin, who bears a striking, head-turning semblance to a young Marc Chagall, the audience sees “snippets… .You’re sort of spying on them at certain moments of their life.”

Chagall’s wife was his muse. She also represented Vitebsk and embodied Jewish Russia for him. “For few painters have art and life been so inextricably entwined,” Jackie Wullschlager wrote in “Love and Exile,” her biography of Chagall. His work focused on “… Judaism, Russia, and love.” After Bella Chagall’s death from a throat infection in 1944, he lost his vital link to Vitebsk, but her presence remained strongly in his paintings until the end of his life, in 1985.

Journey and exile characterized much of the Chagalls’ lives. After the revolution in 1917, Chagall became commissar for the arts in the Vitebsk region, heading the Vitebsk Free Art Studio as well as overseeing all the art activities in the area. He was motivated by the utopia of the time, keen to bring art to the people and to the street, says Claire Le Foll, specialist in the history and culture of Jews in Eastern Europe in the 19th and 20th centuries. But opinions differed about what constituted proletarian art, and in 1920 Chagall resigned from the position. In 1922 the Chagalls left Russia for Europe, moving to Berlin, Paris and finally to America. But on canvas, Chagall would return to Russia, to Vitesbsk, for his whole career.

The play is infused with music and dance, including Russian and Yiddish songs. Watching a couple of scenes, I was mesmerized — moved by the intimacy and by the graceful fluidity of movement as one aspect of the Chagalls’ life flows into another. “There’s something about the subject matter… [for all of us connected to the piece]. You don’t touch Marc and Bella Chagall unless you’re going to match them with the most open hearts,” Rice said. “It’s the opposite of dry. It’s emotional and it’s beautiful. I haven’t got anything bad to say about it.”

“The Flying Lovers of Vitebsk” will be playing at Shakespeare’s Globe Theater in London until July 2 before touring Southampton and Cornwall.

Anne Joseph is a freelance journalist based in the United Kingdom.