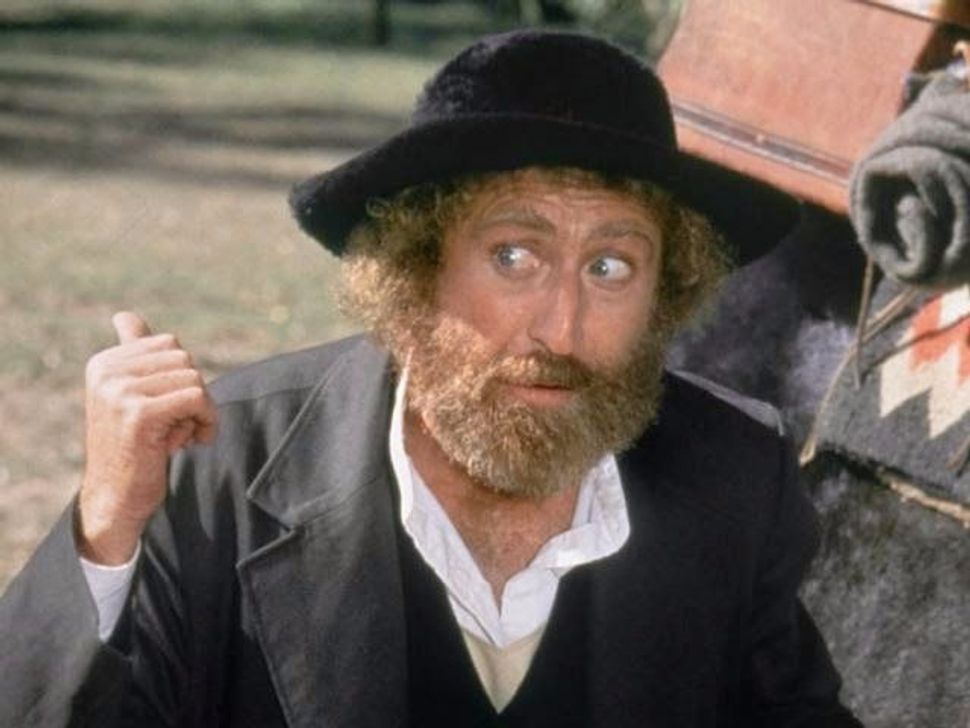 The late Gene Wilder is best known for his performance as the title character in “Willy Wonka and the Chocolate Factory,” a dandy in his royal purple suit, and orange felt top hat. The retrospectives published this week in print, radio and online recall his roles in movies such as “Blazing Saddles”, “Young Frankenstein”, “Everything you Wanted to Know About Sex.” Exhaustively detailed New York Times and Los Angeles Times obituaries do not even mention “Frisco Kid”, nor do online pieces this week by CNN or Rolling Stone which list his best or most memorable performances. Few are the articles that reference him as starring as Avram Belinksi, a Polish rabbi. Parents aren’t eagerly playing “Frisco Kid” for their children as soon as they are deemed old enough, the way they do with “Blazing Saddles” and “Young Frankenstein.”

When “Frisco Kid” is mentioned in light of Wilder’s other more well-known works, it’s referred to as an aberration. Entertainment Weekly wrote, “It’s a fish-out-of-water story that critics didn’t love, but endures as a curiosity because of the unusual pairing [of Wilder and Harrison Ford].” But re-visiting the film reveals that 19th century Orthodox rabbi Avram Bilinski might be the role closest to Wilder’s true self.

In the film Wilder plays a young rabbi from Poland sent to America in the mid-1800s by his village to transport their Torah to a new San Francisco synagogue and ending up in the Wild West, targeted by brutish con men and ultimately befriending a tough but kind cowboy played by Ford. It might be that Frisco Kid isn’t more popular because it is just “too Jewish.“ Vincent Canby wrote in the first paragraph of the Times review that it would only appeal to a “close relative or someone with a built-in weakness for anything ethnic,” god forbid. Wilder saw it as his most Jewish role: When asked by Abigail Pogebrin in an interview for her book “Stars of David: Prominent Jews Talk About Being Jewish” how it felt to play two classic Jewish film roles, he corrects her: “You mean one, in the ‘Frisco Kid,’” saying his role as Leo Bloom in the “Producers” was “Jewishy” but not “overtly Jewish.”

In his memoir “Kiss Me like a Stranger,” Wilder wrote that John Wayne was first slated to play his bank robber friend: “I was also relieved, because in spite of the presence of the rabbi, with John Wayne starring, ‘The Frisco Kid’ would be perceived as a Western, not as a Jewish film.” Wayne dropped out after the producers tried to lower his fee, and Ford got the role.

Wilder was a man who carefully selected each of his roles, which is why he chose not to be on screen for the last twenty years,. The endearing earnestness of the 18th century Polish rabbi must have resonated with Wilder in the same way that, as he wrote in his memoir, Charlie Chaplin in “City Lights” made the biggest impression on him in that it “was funny, then sad, then both at the same time,” much like a schlemiel. Although Wilder was secular, despite a bar mitzvah and attending high holiday services as a child, he did not consider himself a practicing Jew. Yet when he was 18 he developed a compulsion to publicly pray and beg forgiveness from God, for which he sought psychoanalysis for about eight years. He realized the praying was caused by a feeling that he could not seek joy while his mother was suffering from illness. In the movie there are scenes of the rabbi praying and these moments must have connected with Wilder.

The film has been called a “comedic Western” but really it’s the wishful tale of a schlemiel staying true to his principles and beliefs and identity when no one around him shares them and being rewarded in the end. The rabbi is a true schlemiel, the schlemiel being an archetype in Jewish lore and literature since before the days of Chelm (the home of the most well-known literary schlemiels). Literary critic and Harvard professor Ruth Wisse writes in “The Schlemiel as Modern Hero” about the origin and rise of the literary schlemiel. She saw the schlemiel, the wise fool, as a potentially heroic figure, a vehicle Jewish writers and storytellers have used to challenge the status quo, a symbol of the Jewish people as a whole, their staying hopeful and optimistic in the face of tremendous suffering. Depending upon its creator, the schlemiel was either criticized for his weakness or praised for his inner strength. In this film, it’s the latter, a case, as Wisse writes, of the schlemiel being used “as the model of endurance, his innocence a shield against corruption, his absolute defenselessness the only guaranteed defense against the brutalizing potential of might.” The Vietnam War ended only a few years before “Frisco Kid”: the appeal of a schlemiel figure whose earnest innocence is a bulwark against brutal ‘might’ isn’t difficult to grasp.

In “Frisco Kid” the rabbi is on a higher moral and spiritual plane than the rest of the characters and is rewarded for his ideals. His innocence becomes a shield to the evil of the con men who try to harm him. Belinski has chutzpah, he holds on to his ethics when all around him people have none. He is stripped and robbed by the trio of con men but despite his misfortunes he doesn’t lose his faith and commitment to the Torah and keeping it safe. His absolute faith in God and Jewish law leads him to not to ride a horse on Shabbat even with the bad guys chasing them, and this decision ends up saving him because it allows the horses the rest they need to run faster after Shabbat. His religiosity earns him the respect of the Amish (whom he hilariously mistakes at first for landsmen in their black coats and hats and speaks Yiddish to) and the respect of Harrison Ford’s bad boy cowboy. Belinski’s love of the Torah actually saves his life: the Native American chief is so moved by his willing to sacrifice himself for this “book” that he decides not to kill him. Belinski is rewarded in the end by marrying the beautiful Jewish girl, younger daughter of the San Francisco community leader.

Ironically, it’s likely that the very non-Jewishness of director Robert Aldrich allowed him to make a movie proclaiming the virtuousness of the rabbi and the Torah. If a Jew, such as Brooks, had directed the film, viewers would have been expected to laugh at the rabbi, rather than smile with him. As Eric A. Goldman writes in his book The American Jewish Story Through Cinema, in the 1940s after World War II, it was the non-Jewish film producer Zanuck who in 1947 had the guts to produce a film about anti-Semitism, “Gentleman’s Agreement” and another non-Jewish director to create “Crossfire,” which also came out in 1947. Jewish producers at the time were too afraid to put their necks out and have their works to be labeled “too Jewish” and risk inciting anti-Semitism.

Unlike Wilder’s other roles, there is no internal darkness to balance the joy in Belinski—his love of Torah and Jewish law and ritual is pure and brings him only delight, a bulwark against the ugliness of life all around him. Roger Ebert wrote in his review of the film at the time, “What’s poignant about the film is that Wilder’s performance is such a nice one. He’s likable, plucky, versatile. He is, in fact, as good an actor here as he’s ever been before, and at his own brand of complex vulnerability Gene Wilder has never been surpassed.” “Nice,” is such a vague word for Ebert, an astute writer. To not mention the Jewishness of the role fails to acknowledge its power and endearing nature.

As Wisse writes, the schlemiel is a figure whose “nature permits him to live joyously, without unnecessary defenses” despite the suffering he endures. That is how the schlemiel became a symbol of hope for the Jewish people. The shlemiel “continues to dream, or to fight for love, or to seek it…” much like Wilder himself.

The time is ripe to rediscover this film and see Wilder at his most endearing, sweet, soulful, resilient schlemiel-esque self.