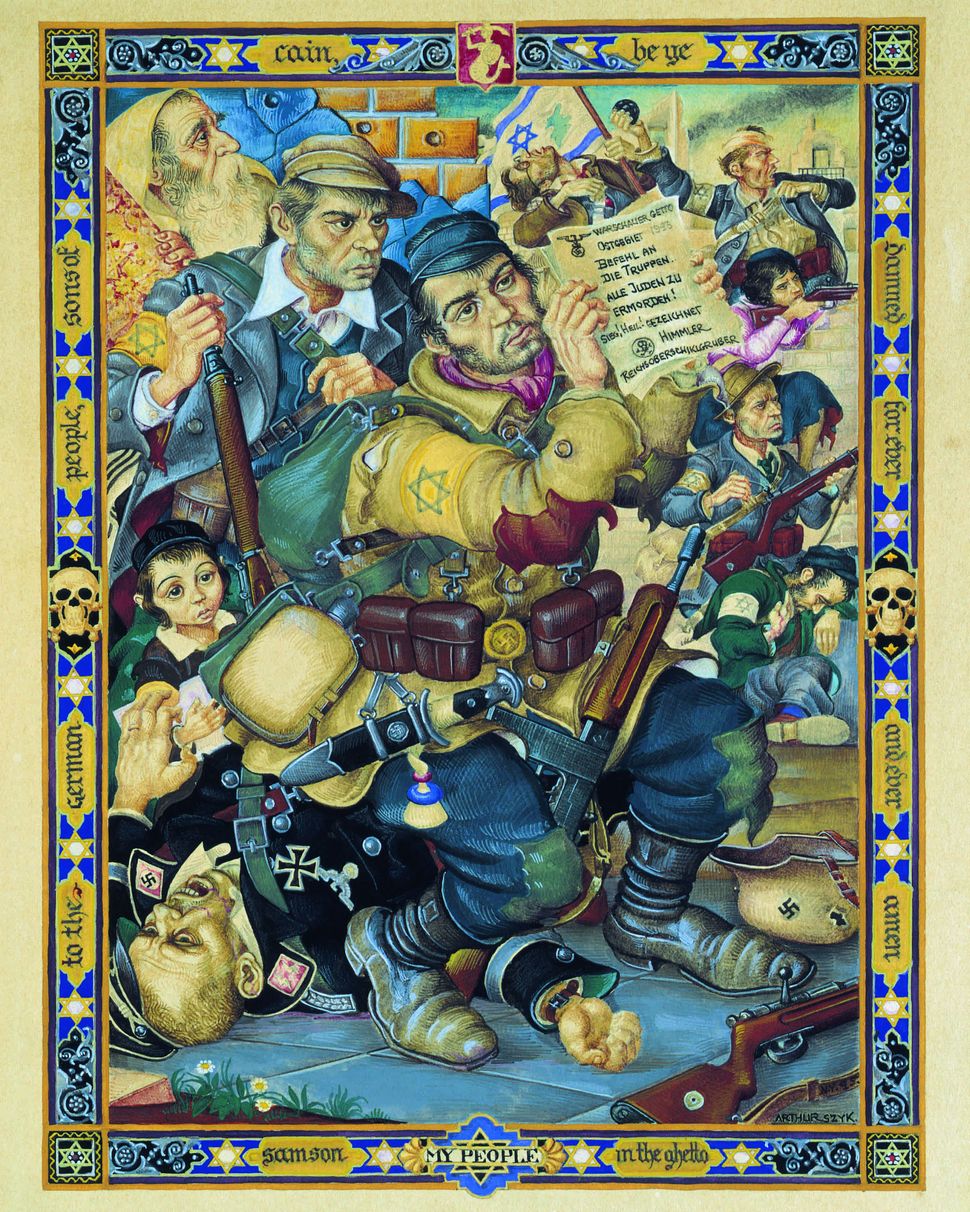 In his 1944 self-portrait, “Ink and Blood,” Polish-Jewish artist and illustrator Arthur Szyk, who immigrated to the United States after Nazi Germany invaded his homeland, depicts himself hunched diligently over an elegant working desk, hard at work on a new painting. Its subject, who has come partially to life but remains pinned to the paper by the metaphysical power of the artist’s pen, is none other than Adolf Hitler. The pair is surrounded by a rogue’s gallery of Axis caricatures. Above, a weary Prussian buzzard hovers, its buttocks punctured by arrows emblazoned with the insignias of the United States, Great Britain, and the Soviet Union. Below, a forlorn Mussolini languishes in the artist’s wastebasket.

The strong currents of twentieth century history set Szyk’s course hither and thither throughout Europe and America. By the time of his 1940 emigration to the United States, which was to become his permanent home, he had already spent extensive time in France and Britain, in addition to his native Poland. But despite this turbulence, Szyk was determined to be not merely the object of history, but an active participant.

He referred to himself as a “Soldier in Art,” a designation now in use as the title of an exhibition of the artist’s work, currently showing at the New-York Historical Society until January 21, 2018. More than half of the works on display come from the Taube Family Arthur Szyk Collection, created when Taube Philanthropies made a $10.1 million grant to The Magnes Collection of Jewish Art and Life at UC Berkeley to acquire the Szyk collection, which had previously been in private hands, difficult for audiences to access. “We think it’s one of the extraordinary collections of the twentieth century,” says Tad Taube. “It has tremendous artistic value, and tremendous historical value as well. Now we have a major university and a major museum dedicated to promoting the collection. Over time, I think the collection will become essentially priceless.”

Szyk is probably best known for his work in support of the war effort against Nazi Germany and their fascist allies. In these paintings, he portrays both the suffering of innocents and the ugliness of Axis leadership with equal graphic force. His work clearly struck a chord with the inhabitants of his adopted homeland, gracing the covers of such magazines such as Collier’s and Time. He was even called upon to help American GIs avoid venereal disease – a 1942 advertisement depicts Mussolini, Hirohito, and Hitler as gonorrhea, chancroid, and syphilis, respectively, accompanied by the catchy tagline, “Fool the Axis – Use Prophylaxis!”

Szyk’s stylistic and technical range was a broad and eclectic as his background. While studying at Paris, where he went to study art at the Academie Julien in 1909, Szyk familiarized himself with artistic modernism, but he also found inspiration in medieval illuminations, manuscripts accompanied by imagery that was both illustrative and expressive while also offering a purely visual pleasure. The catalog of his work also reveals a productive experimentation with elements of Persian and Indian miniatures. Indeed, the artist remained inclined towards smaller scale works throughout his career, so that visitors to his current exhibit are encouraged to make use of magnifying glasses in order to fully appreciate their preponderance of detail. Though not religious himself, Szyk used liturgical imagery which helped to imbue his treatment of secular matters with special power, bringing the force of ancient moral traditions to bear on contemporary subjects.

Szyk also drew heavily from his native Poland. Although prevented from returning to the country by the German invasion of 1939 (the artist was living in England at the time), he continued to feel a powerful connection to its deep Jewish culture and to the plight of its people. According to Francesco Spagnolo, curator of the Magnes Collection of Jewish Art and Life at the University of California at Berkeley, who has been overseeing the Szyk Collection, Szyk was emblematic of the sophisticated culture of interwar Poland. “He’s seemingly an emancipated cosmopolitan in the most positive of ways, an intellectual,” he says. “There’s an absence of nostalgia. It’s a very modern world that he both creates and inhabits. It’s not a Poland of the shtetl, but a Poland of modernist – not merely modernizing – Jewish culture.”

Szyk’s reverence for Polish culture is potently expressed in his 1927 illustration of the Statute of Kalisz, the 1264 charter issued by Duke Boleslaw the Pious granting civil and religious rights to Jews, which would be repeatedly ratified by subsequent kings. Resplendent in color and detail, the piece consists of a formidable forty-five watercolor and gouache miniature paintings. The cover, included in the current exhibition, depicts Casimir III the Great, who ratified the agreement in 1334, in an ornate Gothic style so convincing that an uninitiated viewer might mistake it for an authentic medieval manuscript. By decorating this particular historical text, Szyk glorifies the centuries-long history of Jews in Poland. Yet Szyk’s connection to his native land would be a source of pain as well as pride. A tough 1943 cartoon titled, “We’re Running Short on Jews,” created in response to the World Jewish Congress’s report that 2 million Jews had already been murdered by the Gestapo, is affixed with a heartbreaking dedication: “To the memory of my darling mother, murdered by the Germans somewhere in the ghettos of Poland…”

These experiences imbued Szyk’s wartime efforts with a special urgency. Szyk’s propaganda efforts seem rooted less in workmanlike duty or patriotic zeal than in a sort of existential necessity. Well aware of the danger posed by Hitler, Szyk had incorporated anti-Nazi in his work as early as 1934 works for his Haggadah (published in the UK in 1940). His use of religious imagery helps to give his work a pungent severity. In the 1942 painting “Satan Leads the Ball,” he captures the Axis leaders and their accomplices as mean-looking grotesqueries in a sinister parade led by the Devil. Szyk’s proficiency with fleshy protuberances recalls prewar Berliners Otto Dix and George Grosz, though his outlook is far from the comprehensive scorched earth vision of those eschatologically minded artists. Unlike the most prominent socially critical illustrators and printmakers, from Goya and Daumier on down, Szyk is rarely if ever irreverent.

Created after the war ended in 1945, “Samson in the Ghetto” (also known as “Battle of the Warsaw Ghetto”) depicts the Jewish militants of the Warsaw Uprising as latter-day counterparts to the Old Testament hero. In addition to fitting the artist’s aesthetic and thematic interests, the use of widely recognized, spiritual imagery helped Szyk to resonate with a mass audience. According to the exhibition’s curator, Debra Schmidt Bach, “He really wanted to bring through to as many people as possible that there was a huge crisis, that the Nazis were a threat to civilization itself.” 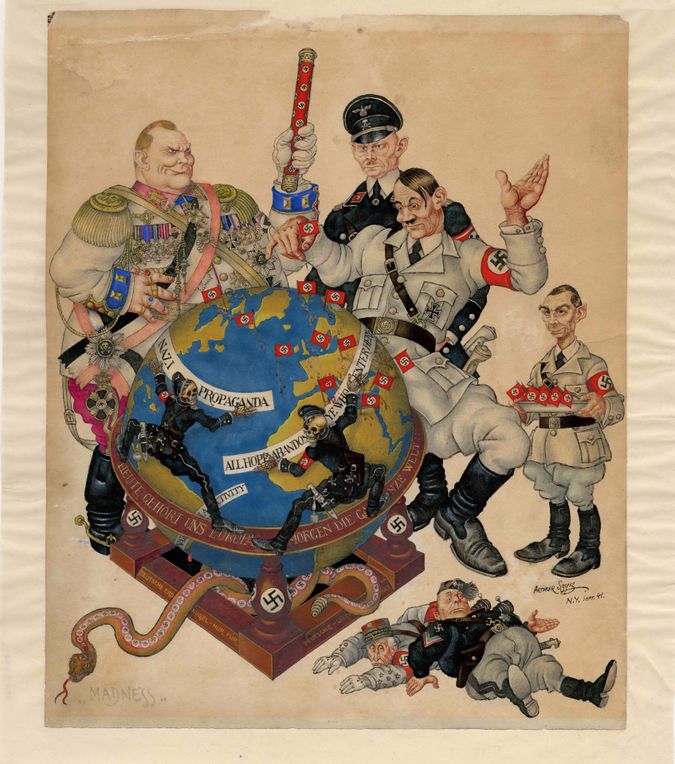 He captured that threat particularly effectively in his 1942 portrait of Richard Wagner, to my mind the most dynamic and visually impressive piece in the exhibit. Here, he directly takes on a figure foundational to the Nazis’ idea of the culture they wished to create and maintain, the self-mythologizing anti-Semite with the dubious distinction of being Hitler’s favorite artist. Anchoring the composition, Wagner sits at his piano, from which issues a litany of horrors, from Nazi leaders and industrial weaponry to obese Valkyries. It’s possibly the artist’s most sophisticated use of color. He employs a bare, white background, against which he counterposes a dense profusion of colors and scales in a thrillingly flowing composition that captures both the power and terror of Wagner’s music.

Throughout and after the war, Szyk dedicated himself to a sort of liberal idealism that came through strongly in his art. In his 1949 illustration of Roosevelt’s Four Freedoms speech, he takes Szyk’s canonization of his secular ideals to a new level, literally recasting it as the “Four Freedoms Prayer.” Through his art, he advocated for causes as varied as the establishment of the Israel and the African-American civil rights movement. Danielle Mosse, the artist’s great-granddaughter, described him as “a fierce opponent of any and all injustice,” tackling civilian issues with the same zeal he brought to martial ones. In an uncommonly frank 1944 cartoon, a white GI asks a black counterpart, “What would you do with Hitler?” The man responds, “I would have him made a Negro and dropped somewhere in the U.S.A.” His activism made him the object of an investigation by Senator Joseph McCarthy’s infamous House Un-American Activities Committee (HUAC), placing him in the illustrious company of Albert Einstein and Paul Robeson.

Look long enough at Szyk’s blending of caricature with high art and forceful political commentary, and his work can appear to prefigure the psychedelic compositions of 1960s counterculture. Nonetheless, his work fell out of favor following its wartime heyday, relegating the artist to relative obscurity. Spagnolo hopes that it’s ready to be discovered by a new audience today. He plans to treat it in accordance with the artist’s particular mode of address, bringing Szyk’s work and thought to a vital, diverse range of viewers. “He was multinational and multilingual, his artistic practice was the result of a plurality of artistic styles,” Spagnolo says.“ So I think that the idea of a plurality of interpretations, of a polyphony, is especially poignant in regards to this particular artist.” Looking at Szyk’s work today, this poignancy is readily apparent. Journeying between the ancient and the modern, the sacred and the profane, the old world and the new, he lived a quintessentially twentieth century life.

Daniel Witkin is the Forward’s Culture Intern. Reach him at [email protected], or over Twitter, @dzwitkin