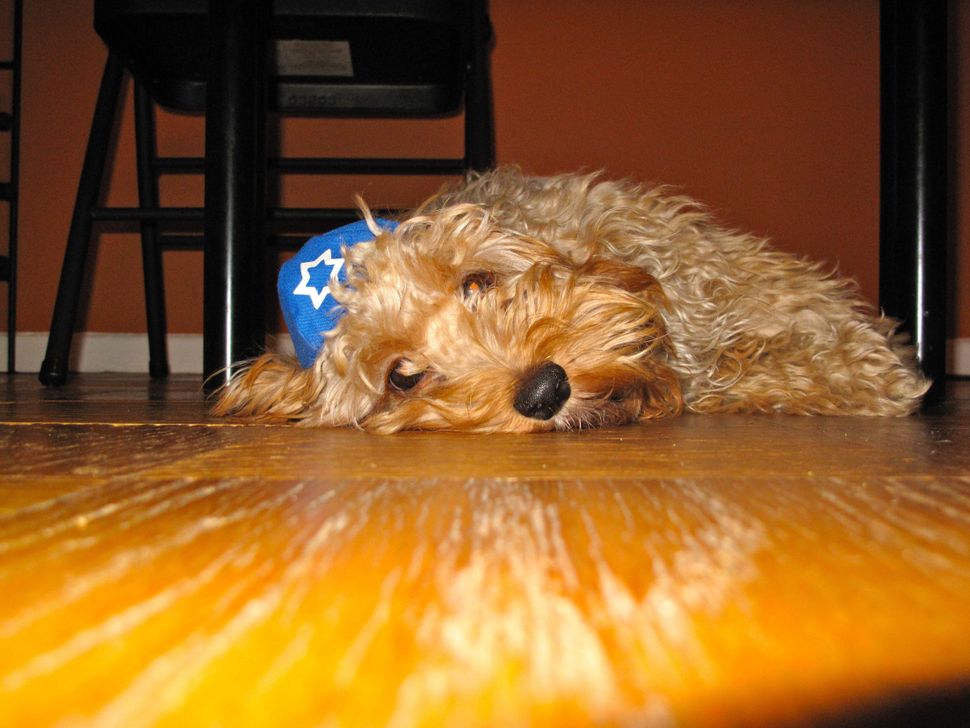 In early lockdown, my friend Jess got a pandemic puppy. She told me she was considering naming him Knish. I suggested Babka, and, as though it was an unspoken truth that the new puppy must be named after a Jewish food, we ran through every example we could think of.

Latke was too obvious, and Cholent sounded more like a bulldog. Mufletas was dismissed as “too hipster.” Eventually, I suggested Sufganiyah. Jess, who works in the Jewish nonprofit world, jumped on it. They would call him Sufi for short, she said – arguably bringing a whole other religion into the game, but Jess and I had become friends in divinity school, so that seemed fitting. Her boyfriend Andrew agreed, and Sufi joined their other dog Mazel.

Sarah Bunin Benor, a professor of linguistics at Hebrew Union College, is currently writing a book on trends in Jewish pet names, an offshoot of her ongoing academic research on Jewish naming customs for humans. She said Jewish foods are a popular theme for Jewish pet names, but not the only one — Biblical names, Yiddish and Hebrew words, dead relatives, Jewish holidays, historical figures and puns (such as Groucho Barx and Golda Meow) are also common categories.

My poor Aunt Frima. My dad named his dog after her. Now I feel bad we didn’t name a kid after her. pic.twitter.com/zHw7dMNDsb

Naming pets after foods or holidays or even departed relatives is not a uniquely Jewish custom; Cookie, Peanut and Oreo all cracked the top 100 dog names for 2020, according to the pet care site Rover, and they even had a list of food-specific names, divided by categories such as sweet, savory, fruits and vegetables. (While no Jewish foods made it into Rover’s top 20 food names, Babka, Blintz, Challah and Rugelach featured in the baked goods category.)

“Most Jewish phenomena, among American Jews, are actually broader American phenomena, and then Jews might do them in slightly different ways,” Benor said.

But for Jews, their pet names may carry more personal significance than a favorite food. “They’re following the American pattern, but they’re also highlighting things that are important to them as Jews. And they’re highlighting their own Jewish identity in the names they choose for their pets,” said Benor. Sometimes the names are even an opportunity for the owner to teach about Judaism or Jewish heritage, such as dogs named Rashi, after the famous Jewish commentator.

This has played out with Jess and Andrew’s dogs. Andrew’s childhood dog was a beagle named Bagel; he’d hoped to get a second dog named Lox, but Andrew named his next dog Mazel. Even though he does not identify as a particularly engaged Jew, his dogs clearly are. 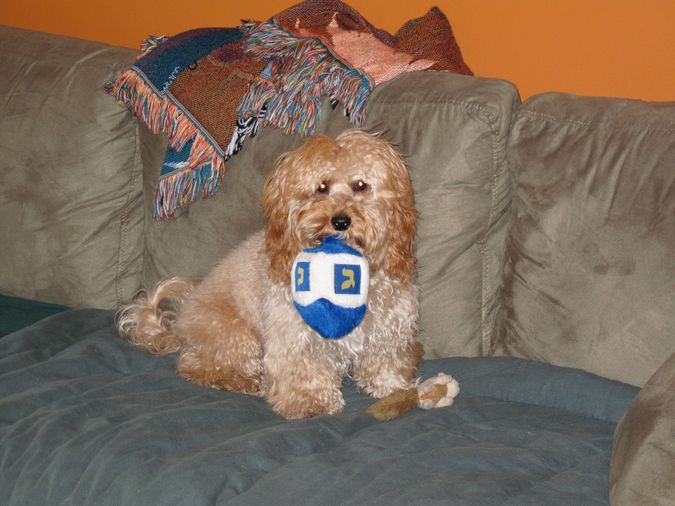 Mazel with a dreidl toy. By Andrew Bock

Maz, as he was known, was an especially strong sign of Andrew’s Jewish connection once he moved to the Bay Area, where he works for TuneIn Radio. “I moved to California, where apparently Jews don’t exist in the animal healthcare world,” said Andrew. “He became May-zel. On the East Coast people would always be like oh, Mazel like mazel tov. Out here, people just thought it was Hazel with an M.” 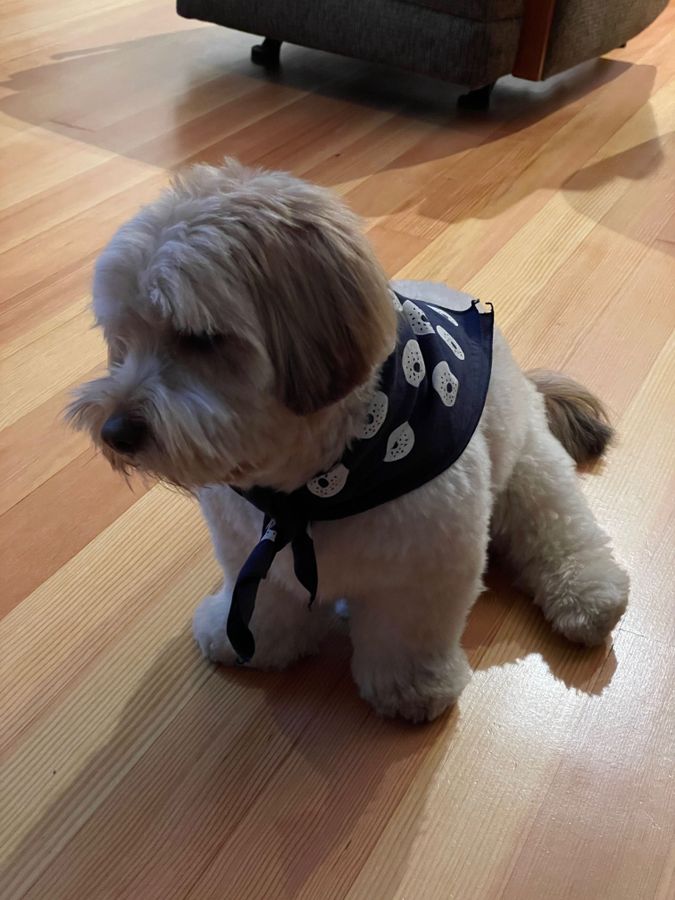 Sufi, going off-brand in a bagel bandana. By Jessica Rosenberg

Mazel passed away recently, just shy of his Bark Mitzvah, which Andrew was looking forward to; 13 felt like an important milestone. But Sufi carries on the tradition of bringing Jewish education to California dogs. “I didn’t even know what a sufganiyah was, I’m that secular,” said Andrew. “I appreciated finding out about that, through this, and then explaining to people at the dog park like oh yeah, it’s Hebrew for jelly doughnut.”

Benor said some owners take their pet’s Hebrew names quite seriously, giving a sick pet a Hebrew name so they can pray mi shebeirach, the healing prayer, over them.

On a recent Twitter thread started by Sophia Zohar, popularly known by her handle @maimonides_nutz, people shared their pets’ Hebrew names. The responses showcased all of the categories Benor has found in her research, with plenty of foods, historical figures and jokey nicknames represented, such a cat named Yirmeow and a dog named Marcel Proust whose Hebrew name is Mendel.

This is Marcel, named for Marcel Proust. His Hebrew name is Mendel. I don’t know the original Marcel had a Hebrew name, but if he did I like to imagine it was Mendel as well. pic.twitter.com/Lv0AhnASPB

Asked her own pets’ names, Benor laughed. She has two guinea pigs, which she let her children name, telling her kids that if they gave the pets Jewish names, they might feature in her book. It was only enough of a bribe for one, which is named Latke; the other is Toffee.

Now I’d like to know if this tracks across humans’ pet names. Is it endearing to call a partner Matzoh Ball? What about Shtreimel? Perhaps that will be Benor’s next project.