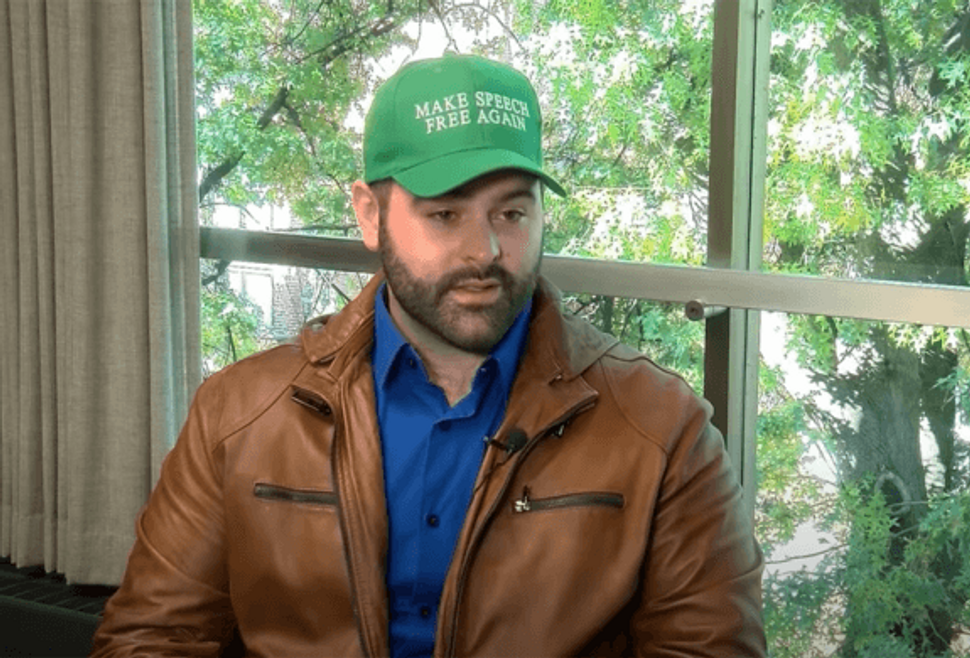 In the wake of the Jan. 6 insurrection, Twitter deplatformed Trump for inciting violence and cracked down on other users. Amazon kicked conservative social media site Parler off of its servers for failing to police extremist conversation. And in the wake of the insurrection, membership of Gab, which has long been a home for far-right extremists and hate speech of all stripes, swelled — even as it was criticized for allowing users to plan the attack on the Capitol on its platform, down to the tools used to pry open doors.

The social media platforms all played a role in the lead-up to the assault on the Capitol. But something that went unmentioned in all of the mainstream coverage of the site in the wake of Jan. 6 is the site’s Christian ideology, and the way it relies on Christianity to justify its extremist content – whether that’s claiming the election was rigged or promoting blatantly antisemitic beliefs.

Most coverage of Gab has focused on its social media site, which looks similar to Facebook: a feed of posts from various people, a sidebar listing groups and topics you can follow. Numerous articles have talked about the site’s lack of moderation which leads to a fertile environment for hate speech, while Gab has defended itself by arguing that it is merely giving users First Amendment rights.

But today, Gab is an entire ecosystem, not just a social media platform. There’s a video platform and a news site, and Gab’s mission goes beyond free speech. On a page titled “What is Gab?” the site’s mission is defined as building “technology that powers a parallel Christian economy.” Tweets from Gab’s now-defunct account made it clear that the world it hopes to build is defined in opposition to a Jewish-ruled one; the posts imply a belief in the antisemitic conspiracy theory that Jews currently control our society.

The page goes on to flesh out Gab’s mission – a graphic shows Gab displacing every other social media site with its own version: GabTV instead of Youtube, GabPay instead of PayPal, and so on, though not all of these services exist yet. It boasts that their commitment to the First Amendment has gotten Gab kicked out of banks and off of servers. But even more than free speech, the page repeatedly emphasizes Gab’s Christian focus and the goal of forming a Christian economy and society. On the Gab news site, there are no section tabs for breaking news or politics or culture, but instead “Bold Christian Writing,” “The Parallel Economy” and “Vax Mandate Resources.”

“Gab was founded in 2016 by Andrew Torba, a Christian technology entrepreneur who left Silicon Valley to start Gab,” the page says; I have never seen Torba’s Christianity described or even referenced in other coverage. Further down the page, a statement from Torba promises Gab users “a chance to participate in the development of a bold and defiant new society” that is “grounded on the firm foundation of our faith in Jesus Christ the King of Kings and Lord of Lords.” Other pages blame society’s ills on “Marxist globalists,” terms that are often antisemitic dog whistles.

It’s not news that Gab is full of conspiracy theories and home to separatist movements; the same is true of most of the moderation-lite or moderation-free alternative platforms that have sprung up as mainstream options began to crack down on hate speech and disinformation. And it’s not news that this comes with antisemitism, on Gab and elsewhere – as one of the oldest forms of hatred, it pops up frequently. Torba himself has used Gab’s Twitter to go on antisemitic tirades. But until recently, articles about Gab and Torba rarely addressed the way Christianity is woven into the conspiracy theories that populate these platforms.

Yet understanding the way the site leverages Christianity is essential to understanding its appeal, and the philosophy of hate that drives the far-right movement.

Antisemitism is at the center of the dangers the site tries to motivate its users to fight, and feeds its fear-mongering. Under the tab “Bold Christian Writing” on Gab’s news site, articles pondering whether Israel is “simply an ungodly Talmudic Zionist Rothschild project” sit next to other pieces with titles such as, “Against the Modern Judaizers.” (“It doesn’t end with circumcision. It never does,” the latter warns, ominously.)

Torba himself has authored numerous articles demonizing Jews for a variety of ills, including a piece on the Ukrainian Holodomor famine that opens by wondering, speciously, why it is not considered a tragedy at the level of the Holocaust, and ends by implying the Holodomor was a Jewish attempt to wipe out Ukrainian Christians – and, in a pointed aside, noting that Biden’s cabinet also includes many Jews.

But Gab’s version of Christianity doesn’t just excuse antisemitism; it excuses rejecting the election, the vaccine, and anyone they disagree with by framing their enemies as inherently evil and immoral for rejecting Jesus as they understand him. The interpretation of Christianity being pushed on Gab by Torba legitimizes the kind of incitement and fear-mongering that led to the Jan. 6 insurrection, framing it as the duty of all Christians, and it hinges on antisemitism, painting Jews and the left-wing as one and the same, and blaming both for the ills of a society it claims is rejecting nuclear families, white people and Jesus.

There are religious, Christian underpinnings driving much of the far-right movement that led to the Jan. 6 attack, including a belief that Jesus privileges whiteness. But perhaps this rhetoric has largely been left out of coverage of Gab specifically because its a relatively recent focus on the site – Torba has only been writing about a Christian separatist, “parallel society” with regularity since the fall.

Yet it’s an significant shift, as Gab is one of the better-known hubs for extremist conversation, and the site is leaning fully into Christian extremism; The New Republic found that Torba was courting figures such as Holocaust-denier Nick Fuentes and E. Michael Jones, whom the ADL calls “an anti-Semitic Catholic writer who promotes the view that Jews are dedicated to propagating and perpetrating attacks on the Catholic Church.” Whether this is a savvy tactic by Torba to recruit new users or to lend his philosophies an air of moral legitimacy through frequent mentions of Jesus, or whether it comes from earnest zealotry, it is a powerful choice and important to note.

Gab’s emphasis on free speech has a similar air of moral righteousness. But the new, Christian society Gab is advocating for makes it clear that commitment to free speech is only relevant when it’s convenient; non-Christians wouldn’t be allowed to have a voice in Gab’s utopia.