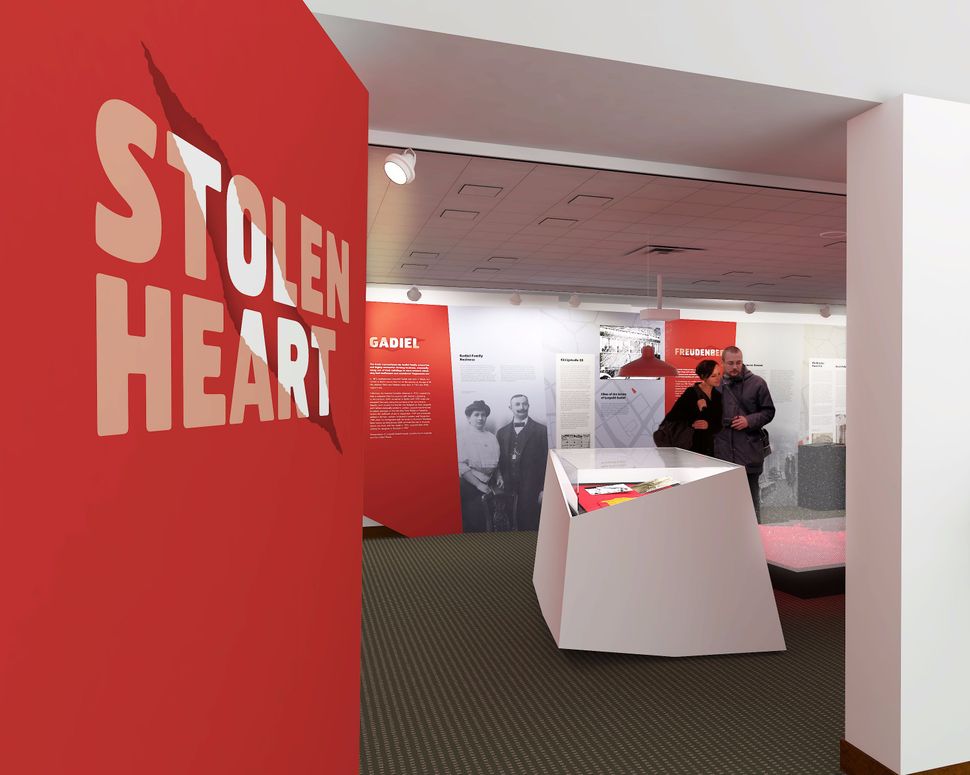 A Heart No Longer Beating: ‘Stolen Heart’ tells the stories of five families in 1930’s Berlin. Image by Center for Jewish History

When Dr. Joanne Intrator’s father, Gerhard Intrator, was dying, he had one wish: that his daughter fight for the property the family had been forced to abandon when they fled the Nazis.

True to her word, Intrator, a psychiatrist based on Manhattan’s Upper East Side, set out for Germany to lay claim to the buildings her once prosperous forefathers — textile factory owners and real estate mavens — once owned in the center of the city. During the war, one of those buildings, Wallstrasse 16, had been set to work as a textile center for printing yellow stars, stamped with the word “Jude.” Nine years would pass before Intrator saw resolution, or restitution.

What anchors our place in the world? What creates our sense of self? What secures our very selves? Our families, to be sure, first and foremost, but a not distant second might be, arguably, our very homes, our place of business, our property. In its very name – “Stolen Heart” — a small, powerful, exhibit at the Leo Baeck Institute at the Center for Jewish History, makes the case for the importance of recognizing the role of property: to a city, to a family, to a people and to Holocaust history. Here, in panels and images and films, are the stories of five families; regular people living unassuming, integrated lives until 1933, when the State began forcibly disentangling them from their country – a slow, painful unraveling that ended either in forced emigration or in death.

In the early waves of Holocaust historiography, investigating the methodical, purposeful mass looting of the Jews was set aside for the — necessary — reportage of murder and destruction, of camps and expulsion, of gas and bullets. It was essential to record the unimaginable, the sheer vastness of the numbers, the incalculable cruelty of the largest act of organized crime Western Civilization had yet seen. That process, inevitably, was so vast that it eclipsed, at first, the stories of individuals, and skipped over some of the mechanisms by which the Nazis were able to perpetuate this crime, the slow stripping of rights, dismantling of normalcy, profession by profession, home by home.

“Stolen Heart” allows us to tackle this matter of foundational loss by diving into the stories of five families whose homes were all forcibly Aryanized as a way to look at the “significance of real estate in terms of memory, rootedness and belonging,” explained Dr. Frank Mecklenburg, curator of this exhibit.=

“My grandparents [the Freudenbergs] rarely talked about their past in Germany,” said Nurit Greenberg, who came in from Israel for the exhibition. Her grandparents left Germany in 1935, on two trains: “In case one was caught, the other could survive.” Her grandmother’s elbow-length gloves and glittering party shoes are a nod to the grand life her grandparents lived before becoming farmers in Israel.

“In the 1990s there was the looted art, and that had spectacular dimensions,” Mecklenburg noted. What’s interesting here is that “these families and their descendants did not learn very much from their parents, [and now they are] discovering that there were very deep roots, not just having a painting on the wall, but owning houses.” It is, he mused, “a kind of a shock to see that there is a whole dimension in their family history that they were not aware of – or even denied.”

Their properties were in spitting distance of each other in the “heart” of Berlin – Mitte. In the center of the exhibition room there is an enormous white diorama-style map of Mitte; projections overlay images of the changing city after Hitler’s rise to power and anti-Jewish regulations take root. “To illustrate the expropriation of Jewish family homes and businesses in Berlin,” the design firm C&G Partners “created a 3D-printed time-lapse video map detailing the family properties in context with aerial views of the city center from 1933 to present day,” explained Jonathan Alger, Managing Partner.

The Freudenberg family building had been a house of haute couture fashion. It became, a wall panel explains, a center for investigating “mass-gassing and euthanasia methods.” The Panofsky family had been bankers — a moving last speech to employees can be heard by picking up a “telephone.” In 1994 the heirs to those who fled sought restitution and were denied. Their loss of property, it was ruled, was not “racially motivated.”

Many of these properties have a layered history – Aryanization, and then, post-war, they were nationalized by the East German state. The families themselves were torn apart by distance, with children who were all scattered across the globe, or by murder.

“It is an expropriation, but it also had a role in the persecution and eventual destruction of the Jewish people,” said Harold James, a professor of modern German and European history at Princeton University, in public comments at the opening of the exhibit. “The Nazis wanted to marginalize Jews, to steal their property before they emigrated, so that when they were pushed into emigration they could come with almost nothing.” It was, he explained, a way of humiliating the Jews before the war, as well as a way of funding the war effort.

On March 29, the night of the exhibition’s opening, several hundred people crowded into the CJH auditorium, including representatives of the five families, neighbors in a previous generation.

“To most of those who will see the exhibit, the families will not mean much to them. They did not create policies or invent things,” said Karey Solomon, a needlework designer and great-granddaughter of Leopold Gadiel, whose lush life is shown in the exhibit through his own home -movies of the 1920s. “But for us, who are also ordinary people trying to lead ordinary lives, this exhibit is nothing short of extraordinary, because suddenly we have a family — and we can see they left something of themselves behind, which we wouldn’t have had otherwise.”

Born out of a larger exhibition mounted at Berlin’s Stadtmuseum in 2013, the panels of “Stolen Heart” weave together a story of the economic destruction of Berlin’s Jewish community as part of the emotional and financial toll on individuals, and the fates of those affected. That project began because “in Berlin there was a discussion about rebuilding all those empty areas — large areas without buildings,” left empty after the destruction of the war, said Lutz Mauersberger, an archivist who worked on the original exhibition. “Not one of the Jewish owners had gotten their property back.” Some 225 of the properties had been Jewish owned, but Mauersberger said, “You cannot tell the story of more than 200 families, because you don’t have the information… so we decided to take five.”

The Jewish Museum Berlin put the curators of the Stadtmuseum in touch with Dr. Intrator who helped in the creation of the exhibit. Her family had manufactured nearly half of all German-produced textiles in the early 1930s at Hausvogteiplatz 1, a building that was forcibly Aryanized in 1937 and auctioned off. Her father arrived in New York in 1937; her grandfather fled later — late enough that his journey was arduous and included several years stuck in Cuba, unable to move farther north. He died the day he arrived in America.

Intrator’s long struggle for recognition of her family’s loss became the crucial starting point to these twinned exhibits: one in Berlin, which focused on the loss of neighbors and the weight of economic oppression, and one in New York, which focused on understanding the people and individual stories behind these losses. It was her effort, as well, that brought the German exhibit to America, and to the Leo Baeck Institute, where it will remain on view through October. (She is, as well, working on a book about her family’s story.)

“We are more or less familiar with the broad strokes of history,” Mecklenburg said. Now, he said, “we are able to focus more on individuals and individual circumstances, families, the more personal aspects. In terms of Holocaust historiography we have been moving from the 6 million to the story of one plus one plus one plus one up to 6 million, so we want, and we need, to give faces to the victims and the lives of people before, and then whatever happened to them, and I think that this exhibit is exemplifying the living circumstances of people by pointing out this is where they lived and this is where they had a business.”

‘Stolen Heart’ runs through October, 2016, at the Leo Baeck Institute.

Sarah Wildman is the author of “Paper Love: Searching for the Girl My Grandfather Left Behind” (Riverhead Books, 2014). She is a contributing editor at the Forward.