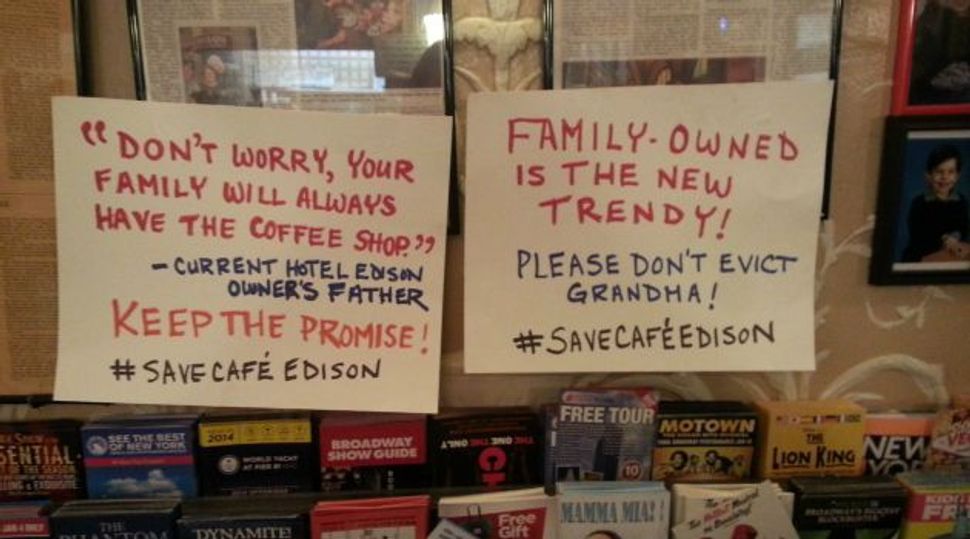 After a campaign to save Café Edison failed, the eatery has closed. The Midtown café that catered to Broadway workers, tourists and locals for 34 years served its last matzo ball soup this weekend, and former patrons seem heartbroken.

“The closing of Café Edison speaks to what’s happening to our city,” a dismayed regular told me at the bar as she paid for her french fries and potato soup. “The city is losing its character, and it makes me sad,” she added wistfully.

I went ahead and ordered the matzo ball soup along with the “best-in-New York” vegetarian chopped liver on rye, and — taking my waiter’s suggestion — the blintzes filled with cherry, blueberry and cheese.

“One matzo ball, one vegetarian chopped liver on whiskey and blintzes — one of each,” my waiter called into the kitchen. And I, too, felt a pang of regret for the diner talk that will disappear with the cafe.

“How is everyone dealing with the closing?” I asked my waiter.

“You know, we weren’t even sure we were going to close until a week ago,” he began. “The rent’s gone up five times what it was. Maybe a celebrity chef will come. Maybe the [Edison] hotel will expand. We don’t know. We just keep moving.”

He went on to tell me about the regulars, who have been coming every day after their theater jobs to eat their usual meal at their usual spot. “Some people come in, see their spot is taken, and come back later for that spot.” He pointed me to one such man.

I approached, and started a conversation. This regular agreed with the woman at the bar: “What’s happening to the café just shows how much the world has changed,” he said. “Thirty-four years ago two Holocaust survivors made a handshake agreement over the cafe, and now the owner is ignoring the petition [to save Edison]. It says a lot about the world and about the guy.”

But not everyone is upset about the end of the pastrami-on-whiskey era. One regular had been eating at Edison two to three days a week for the past 23 years. “Look around,” he said to me. “Tiles are falling down. This place needs to be fixed up.”

I do look around, and I see gorgeous chandeliers, intricate wooden panels and pillars and a heck of a lot of old-timey charm.

“Basically the new restaurant is going to be the same place,” he continued, biting into a pickle. “I spoke to the owner just today. He wants to keep the same feel. He recognizes that this place is unique. But, if you look around, you could see this place needs a spruce, and that’s what it’s going to get.”

Just when I think this regular is as cold as his borscht, I notice a mist in his eyes. “Here’s my problem: When I came to New York in 1962, there were clubs, joints and eateries that were part of the fabric of the city. Slowly but surely, they’re getting pecked away in favor of big, tall metal things.” He paused in thought. “But you can’t tear it all away. You shouldn’t do it! This process has been slow but sure. Will this cafe be replaced with white tablecloths? I don’t know. But if it does, it will be one more peg in New York’s coffin.”

So we have a consensus. Maybe the change in management will be for the better, and we can look forward to eating our blintzes in a rejuvenated diner. It’s certainly too soon to know for sure. All we can do for now is bid farewell to a Times Square haunt that’s served its last soup and slaw after 34 years.