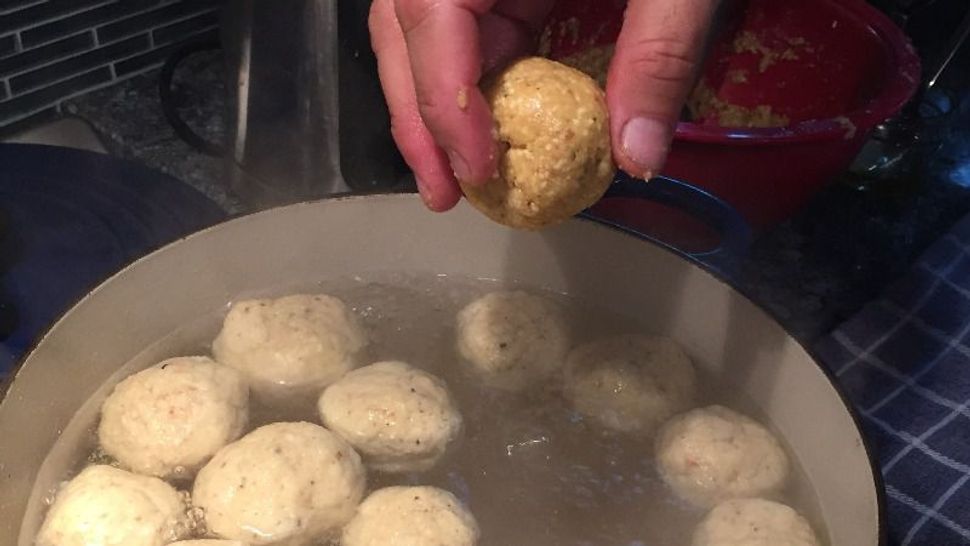 Definitely not your bubbe’s matzo balls; these have THC in them.

On a recent Friday night in the San Francisco Bay Area, seven 30- and 40-somethings gathered in a cozy home for Shabbat dinner. They lit candles, chanted Kiddish and ritually washed their hands before ha-motzi, the prayer over the bread. But the first bite of challah is where this Sabbath meal deviated from most others: The freshly baked loaves were infused with marijuana.

Let’s face it: A group of Jews ingesting laced challah somewhere near Berkeley is hardly breaking news; no doubt it’s been done many times before. But there’s more. Cannabis-oil was in the matzo balls. The tamarind Brussels sprouts and roasted potatoes accompanying the chicken were brushed with it, too. The cookies served with ice cream for dessert were made with pot-infused butter.

Watch Jeff the 420 Chef make cannabis-infused butter — without the smell or taste of marijuana.

Word is getting out about “Jeff the 420 Chef” (420 being a codename for marijuana, or the partaking in it), the mastermind behind progressive pot dinner parties like this one, where diners get higher as the night goes on. But this was his first-ever Shabbat dinner.

He called it “Pot Shabbat.” And if he gets his way, there will be many more like it.

Jeff the 420 Chef (who will henceforth be called “Jeff,” as he doesn’t use his last name professionally for obvious reasons,) is a self-proclaimed “God-loving Jew,” and grew up Orthodox. Perhaps it’s appropriate, then, that he applies the same fastidiousness with which one would study a verse of Torah to the chemistry of his dinners.

Jeff meticulously plans his meals using Sativa, as that is a strain of weed that causes the giggles and the high. By dessert, a Sativa and Indica blend in the cookies mellows everyone out, as Indica is a strain used more for pain relief and insomnia, and is most often prescribed for cancer patients or others who use marijuana medicinally.

The effects kick in slowly. Diners start to feel it by the end of the main course. Conversation turns to dishes Jeff should offer, like “marijuan-ton soup.” Someone suggests that comedian Sarah Silverman (who famously showed off her vaporizer on the red carpet at the Emmys) should host a Seder cooked by Jeff next year.

Later, a dance party breaks out and then Cards Against Humanity is played. Everyone is happily high, of course, but not out-of-their-minds crazy high. Jeff prides himself on the fact that he has cooked for hundreds of people and no one has ever, in his words, “freaked out.”

“I know exactly what I’m working with,” he said. “So throughout an entire party, people should not get more than the right amount for them in their food.”

He does this by sampling as he cooks, which means that by the time the challah is ripped apart, he’s way higher than his diners.

He has cooked numerous non-Shabbat dinners like this in Colorado, where pot is legal for recreational use, and in Los Angeles, for celebrities he won’t name. In California, where marijuana is legal only for medicinal purposes, everyone who participates in one of his dinners must have a medical-marijuana license.

The host pays for the food, and Jeff is given a gratuity at the end of the night, covering the cost of the weed and his efforts. In his own estimation, he’s a bit of a master; a mad scientist — like Walter White, but nicer. Not only did he cure the pot he used for the Sabbath meal in a natural solution of his own creation for eight days so the overly herbaceous flavor would be undetectable (no mean feat, as consumers of edibles know), but he constantly checks in with people throughout the night, evaluating their moods.

“I don’t think anyone else is doing this, monitoring the flow and energy of the evening,” he said. “It’s a science.”

Jeff has hooked up with the meal-sharing web site to offer classes in San Francisco on how to make nearly tasteless pot butter — again, those who take it must have a license, and bring their own pot — and is working with a lawyer to patent his own formula for totally tasteless “cannabutter,” as he calls it. 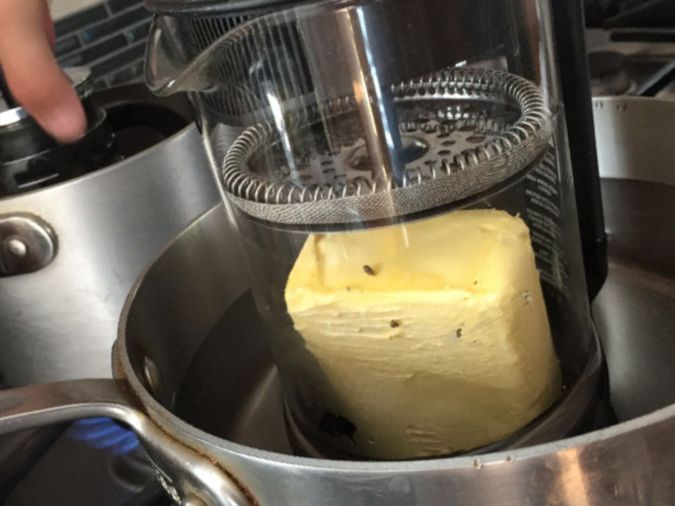 The THC (tetrahydrocannabinol) and CBD (cannabidiol) must be extracted from the weed at high temperatures, a process that, if not done right, can make those who ingest it sick. The night before Pot Shabbat, Jeff’s butter and oil spent many hours with the pot in a French press, in boiling water.

Jeff has spent the last several decades living in New York, but he’s been back and forth between California and Colorado a lot lately, since it’s in those states that word about him is really getting out. While he’s now based in Los Angeles, he’s willing to go wherever the greatest number of opportunities are — the Bay Area may be a frontrunner. He has a cookbook deal with a major publisher and would love to have his own cooking show. He was recently invited to offer his treats (to medical card-holders, of course) at the MTV Movie Awards.

His epiphany to become a pot chef came while he was meditating several years ago. A CD of life coach Anthony Robbins advised him that in order to figure out his life purpose, he should ask himself, “What do you like to do when you’re bored?”

His answer: “I cook and bake and get high.”

Around the same time, a friend in California asked Jeff to cook for his mother, who had cancer. She had a medical-marijuana card, but the sweets sold in dispensaries were leaving her wanting nutritious food with the same medicinal effects.

“I started experimenting with how to make real food with pot taste good, and cooking for my friend’s mom,” he said, “and I put two and two together.”

The notion that he should become a marijuana chef was a message from God, he said.

“I know it sounds crazy, but I really believe God and the universe is directing me. People love my cooking, and it’s all about giving back. Every single one of us is granted something special.”

Jeff, 52, grew up in West Hollywood. His first experience with pot came when he was 16, at an NCSY (National Conference of Synagogue Youth, the Orthodox Union’s group for teens) convention in upstate New York. Like many teenagers, he took a liking to it right away.

As he got older, even though he loved getting high, Jeff didn’t love the physical sensation of ingesting smoke. So he taught himself how to cook with pot instead.

Jeff knew he was gay for as long as he could remember. He came out to his rabbi at 21. This was the mid-1980s, when headlines having to do with the gay community were all about AIDS; not about marriage equality.

“The rabbi told me, ‘If you marry the right girl, everything will be fine,’” Jeff said. “I was brainwashed to believe that I had to do what the rabbi says. I thought ‘Maybe this is a test.’”

Jeff married a woman he met at Yeshiva University, and they had three sons. He attended a Young Israel synagogue.

“I realized life is short,” he said. “I’m a great guy and I’m a great dad and I needed for my kids to know who I really am. I didn’t want to live a lie anymore.”

Within a year, he had come out and divorced his wife, though he remains close with his sons. He is proud that they have become proponents for gay rights.

Jeff has a good relationship with his parents, too. His mother called while he was in the midst of prepping for Pot Shabbat. He told her he’d be saying Kiddish for the first time in a while later that evening, which no doubt made her happy. But he’s far from Orthodox now, because of the way his community treated him when he came out.

“I still love God,” he said. “I still daven, but I do so because I want to pray to God and say what I want, not say what they want.”

As I observed him sharing with his mom his excitement over cooking his first Pot Shabbat, I couldn’t help but wonder what she must think of all this. I was pretty floored when she readily agreed to speak with me.

As long as he wasn’t crossing any legal lines, she said, she was fine with it. “He’s filling a niche and helping a lot of people, especially when they have problems eating,” she said.

Jeff’s mother is a contributor to kosher magazines and a kosher foodie herself, which has no doubt influenced her son. While she’s eaten food that Jeff has cooked, she said that “the jury’s still out” on whether she’ll ever sample the laced stuff — even if cooked for a Sabbath dinner.

She hasn’t shared her son’s new calling with friends, because “it hasn’t come up,” she said. But she did tell someone at her doctor’s office about what Jeff was up to. And while “my son the marijuana chef,” will probably never provide the same amount of nachas to a Jewish mother as “my son the doctor,” Jeff’s mother said the response still made her proud: “What an amazing thing to be doing,” she was told.

Alix Wall is a freelance writer and personal chef in Oakland, California, and the author of the blog The Organic Epicure.