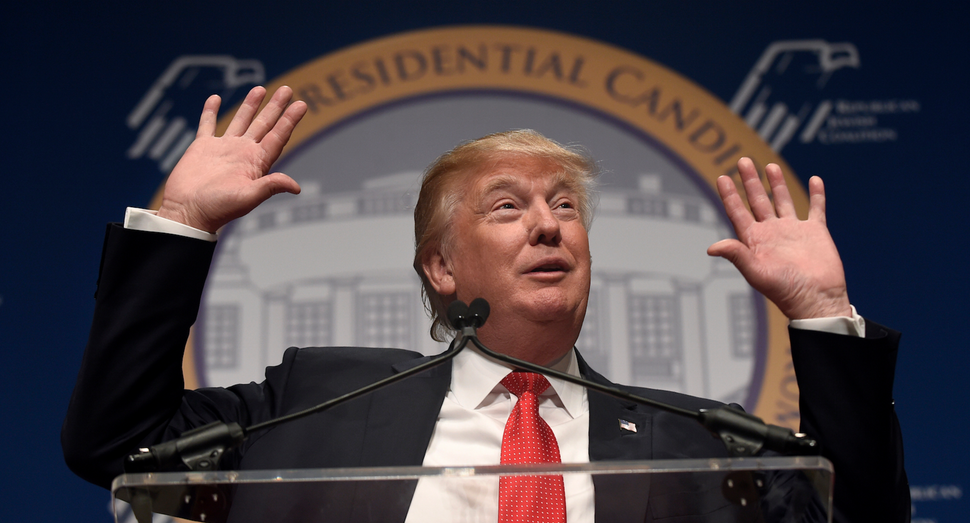 White nationalists and the “alt-right” were dismayed by President Trump’s remarks at a Holocaust remembrance speech on Tuesday, seeing in the speech further evidence of a betrayal to their cause.

“You can never appease the Jews,” wrote Benjamin Garland at the neo-Nazi website the Daily Stormer. “Give them an inch and they want a mile. The only way to deal with them is to ignore them and/or tell them to shut their filthy mouths.”

Garland bemoaned what he saw as a turnaround for Trump. Months ago he was “a man who knew how the Jews operate and as a man with enough self-respect to not be publicly humiliated by them by bowing to their every whim and demand.”

But Jews “have their ratlike claws deep in him now,” Garland wrote.

Former Ku Klux Klan head David Duke also railed against Trump in the hours after the speech and decried the fact that the Holocaust is remembered annually.

“Why is the so called Holocaust the only atrocity to receive its very own ‘Remembrance Proclamation’? Jewish privilege,” he wrote on twitter.

“Do you not have any power?” Duke went on, directing his message at Trump. “Why are you surrounding yourself with the enemies of the American people?”

Duke is no longer a member of the KKK but is seen as an elder figure in white supremacist or nationalist circles and has more than 30,000 Twitter followers. Not all white nationalists or members of the “alt-right” are as focused on so-called “Jewish supremacy” as Duke, who dedicates much of his Twitter feed to the theme.

Like the most anti-Semitic elements of the “alt-right,” Duke now sees Trump as a sort of Jewish puppet.

“Alt-right” figurehead Richard Spencer, who calls himself a white nationalist or an Identitarian had much more tempered criticism. Spencer, unlike some on the “alt-right,” is not a Holocaust denier and has even praised Zionism as a form of nationalism he admires.

“Did Trump crib his speech from a History Channel DVD? Sounds like it. Every ’90s Holocaust cliché was sounded,” Spencer wrote on Twitter.

For some, the Holocaust remembrance was seen as part of a broader trend — and tied to Trump’s recent strikes in Afghanistan and Syria, which they see as being spearheaded by Jared Kushner, Trump’s Jewish son-in-law, and his daughter Ivanka Trump. They also criticize Trump for choosing Gary Cohn, former president of Goldman Sachs, as an economic advisor.

On the blog Occidental Dissent, Brad Griffen, who runs the website and goes by the name Hunter Wallace, also wrote that Trump’s Holocaust remembrance was a betrayal.

“We voted for ‘Make America Great Again,’” he wrote. “We wanted an independent country. Instead, we got Jarvanka, Gary Cohn and a bunch of globalist neocons foaming at the mouth to start new wars.”

Trump has publicly disavowed both the “alt-right” and Duke specifically, but many supporters in these circles have held out in the hopes the administration would still bolster their loosely-organized movement.