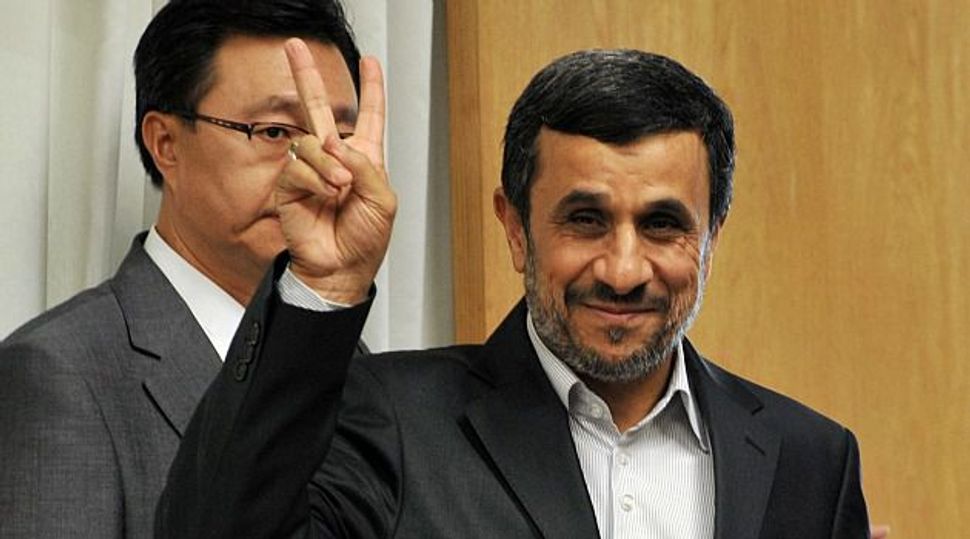 Last Rant: Mahmoud Ahmadinejad was warned to avoid incendiary rhetoric at the United Nations. He didn?t heed the request. Image by getty images

Iran’s president said on Wednesday his country was under constant threat of military action from “uncivilized Zionists” and called for a new world order not dominated by Western powers in the service of “the devil.”

In his eighth address to the U.N. General Assembly’s annual gathering of world leaders, Mahmoud Ahmadinejad painted a gloomy picture of a world driven by greed rather than moral values.

“The current abysmal situation of the world and the bitter incidents of history are due mainly to the wrong management of the world and the self-proclaimed centers of power who have entrusted themselves to the devil,” Ahmadinejad said, in what is expected to be his last address to the world body.

There was no reiteration of his comments to journalists in New York on Monday that Israel has no roots in the Middle East and would be “eliminated.”

However, in a clear reference to Israel, he told the assembly: “Continued threat by the uncivilized Zionists to resort to military action against our great nation is a clear example of this bitter reality.”

On Tuesday, in his address to the General Assembly, U.S. President Barack Obama warned Iran he would do what it takes to prevent it from getting nuclear arms and said there was not an unlimited time to solve the crisis via diplomacy.

Israeli Prime Minister Benjamin Netanyahu, who is due to speak at the United Nations on Thursday, has hinted Israel could strike Iran’s nuclear sites, and has criticized Obama’s position that sanctions and diplomacy should be given more time to stop Tehran from acquiring nuclear weapons.

Without mentioning the United States by name, Ahmadinejad took aim at Washington’s global dominance, asking: “Are we to believe that those who spend hundreds of millions of dollars on election campaigns have the interest of the people of the world at their hearts?”

Representatives of the United States, Canada and Israel chose not to be present in the U.N. auditorium for the speech, which coincided with Yom Kippur, one of the most important Jewish holidays.

Ahmadinejad, whose own second and final term in office ends next year, said authority should be used as a sacred gift, “not a chance to amass power and wealth.”

Israel and the United States have refused to rule out the possibility of an armed strike on Iran’s nuclear facilities, which the West suspects aim to produce atomic bombs but which Tehran says are for solely peaceful purposes.

‘A GREAT AND PROUD NATION’

Iran is under sanctions imposed by the United Nations and Western powers for its refusal to comply with U.N. Security Council demands to halt its nuclear enrichment program.

Ahmadinejad said the 15-nation council, on which the United States, Britain, France, Russia and China all have vetoes, was dominated by “a limited number of governments,” preventing the United Nations from acting in a just and equitable way.

Declaring that he represented “a great and proud nation that was a founder of human civilization,” Ahmadinejad said: “There is no doubt that the world is in need of a new order and a fresh way of thinking.”

He said this should be “a just and fair order in which everybody is equal before the law and in which there is no double standard.”

His speech touched on issues he has raised in previous U.N. appearances, such as suggesting there should be an “independent fact-finding team” established to discover the “truth” behind the Sept. 11, 2001 attacks on the United States and complaining about the “hegemonic policies and actions of world Zionism.”

A spokeswoman for the U.S. mission to the United Nations, Erin Pelton, said the United States decided not to attend the speech given Ahmadinejad’s recent comments on Israel and the fact that it was Yom Kippur.

“Over the past couple of days, we’ve seen Mr. Ahmadinejad once again use his trip to the U.N., not to address the legitimate aspirations of the Iranian people, but to instead spout paranoid theories and repulsive slurs against Israel,” Pelton said.

“It’s particularly unfortunate that Mr. Ahmadinejad will have the platform of the U.N. General Assembly on Yom Kippur.”

European Union states did not walk out, apparently because Ahmadinejad did not cross any of their “red lines.”

“Ahmadinejad gave a long, rambling speech,” a European diplomat told Reuters on condition of anonymity. “Previously we’ve walked out because of his anti-Semitism, threats against Israel and 9/11 conspiracies. This year his only crime was incoherence.”

Bearing signs reading “Secular Democracy for Iran” and “Khamenei Dictator of Iran Must Go,” referring to Iran’s supreme leader Ayatollah Ali Khamenei, about a hundred opponents of the Iranian government protested across the street from the United Nations as Ahmadinejad spoke.