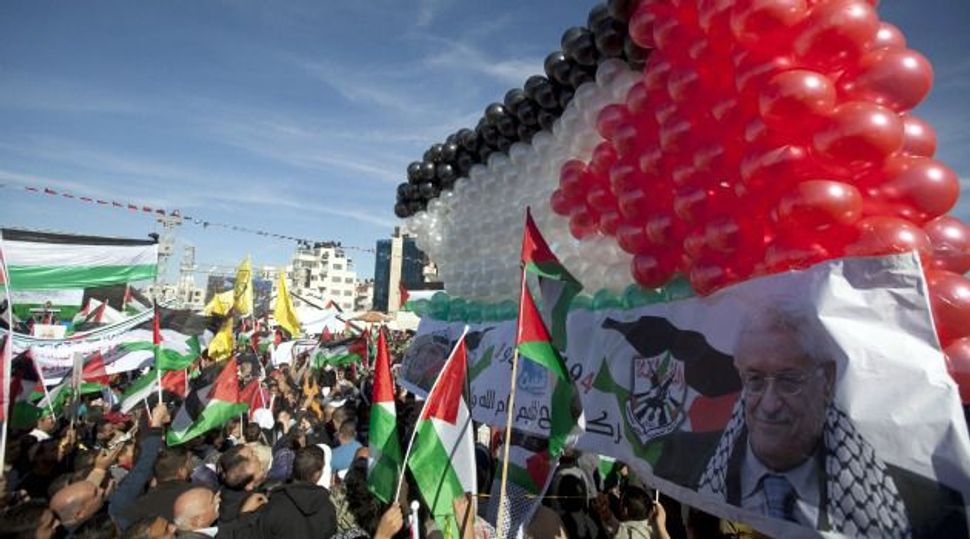 Returning in Triumph: Palestinians welcome President Mahmoud Abbas back to Ramallah after his successful bid for statehood at the U.N. Image by getty images

“Abbas, onwards, we are with you until liberation,” flag-waving Palestinian well-wishers chanted at their president, returning from the assembly which voted 138 to nine with 41 absentions on Thursday to implicitly recognise Palestine.

Abbas’s Palestinian Authority, which exercises limited self-rule in the territory Israel captured in a 1967 war, gave civil servants half the day off to attend celebrations at the presidential headquarters in the West Bank city of Ramallah.

The festivities included a ceremonial release of balloons in the red, green, white and black colours of the Palestinian flag into the sky. Palestinian onlooker Mohammad Stayyeh said he was there “to thank the president for the historic achievement and dream that he achieved for us and our children”.

Revelling in his most stunning diplomatic achievement in years, Abbas waved at the crowd and said, “the recognition of Palestine as a state changes a lot of facts, and aims to establish new ones.”

He suggested though that in the absence of a peace deal with Israel, the largely symbolic U.N. decision may have limited impact on the ground, at least for now.

“We have to recognise that our victory provoked the powers of settlement, war and occupation,” Abbas said, alluding to an Israeli decision announced on Friday to build as many as 3,000 new settler homes on land Palestinians want for a state.

The United States joined Europe in denouncing the planned settlement expansion as counter-productive to Israeli-Palestinian diplomacy, frozen since 2010.

Israel, reeling from the U.N. vote it saw as a diplomatic blow, told the Palestinian Authority in the West Bank on Sunday it would withhold Palestinian tax revenues this month worth about $100 million, a step that would add to the cash-strapped authority’s economic woes.

The authority largely depends on the tax money to pay the salaries of some 153,00 civil servants.

Israel has charged that merely by approaching the U.N. for recognition, the Palestinians violated past agreements it says bind both sides to avoid taking unilateral steps instead of seeking negotiated settlement.

Palestinian celebrations were also marred by a political split in their ranks, between Abbas, whose Western-backed Fatah movement holds sway in the West Bank, and Islamist rivals Hamas, who rule the Gaza Strip.

Hamas’ leader in exile, Khaled Meshaal, has told Reuters he plans an historic visit to Gaza next week in honour of Hamas’ 25th anniversary. Hamas rejects Israel’s right to exist, and unlike Abbas’s Fatah refuses dialogue with the Jewish state.

In his speech, Abbas said “reviving our national unity” was one of his goals ahead, and the crowd chanted calls for “an end to division”.

Meshaal, in his remarks to Reuters in Qatar on Friday, suggested Hamas’s conflict with Israel last month, in which 170 Palestinians and six Israelis were killed, had enhanced the Palestinians’ diplomatic position.

He challenged Abbas to make the U.N. step a “part of a national Palestinian strategy that includes (armed) resistance”.