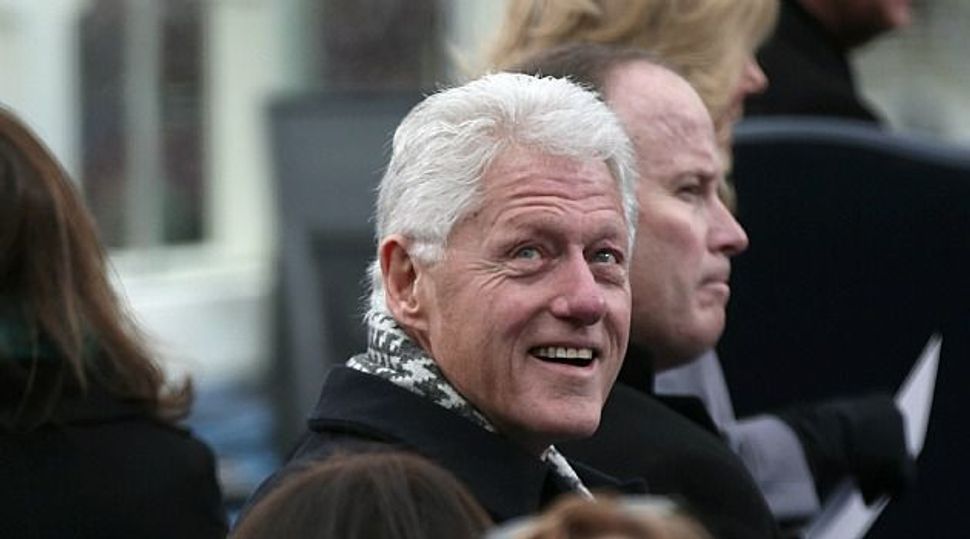 You Did Fine! Bill Clinton will lead a parade of mourners at Monday?s funeral for Ed Koch. Image by getty images

Bill Clinton will be there to tell Ed Koch one last time that he did just fine.

The former president will lead a parade of dignitaries at Monday’s funeral for the ex-New York mayor, who coined the phrase, ‘How’m I Doin’?’

Clinton will cut short an Asian trip to speak at the service at Manhattan’s Temple Emanu-El, the New York Post reported. He will serve as a representative for President Obama, who will not be able to attend the star-studded event.

Mayor Michael Bloomberg will also speak at the funeral, as well as Ido Aharoni, consul general of Israel in New York. Longtime friend John LoCicero are also expected to deliver eulogies, along with several family members.

Koch was credited with lifting New York from crushing economic crises to a level of prosperity that was the envy of other U.S. cities. Under his leadership, the city regained its financial footing and underwent a building renaissance.

But his three terms in office were also marked by racial tensions, corruption among many of his political allies, the rise in AIDS and HIV, homelessness and a high crime rate. In 1989, he lost the Democratic nomination for what would have been a record fourth term as mayor.

Bloomberg called Koch a quintessential New Yorker and one of the city’s great mayors.

“In elected office and as a private citizen, he was our most tireless, fearless, and guileless civic crusader,” Bloomberg said. “His spirit will live on not only here at City Hall, and not only on the bridge the bears his name, but all across the five boroughs.”

Tall and mostly bald, Koch had a quip for every occasion and once said he wanted to be mayor for life. He was the only U.S. mayor to have a bestselling autobiography that was turned into an off-Broadway musical.

This week, “Koch,” a documentary about his City Hall years, premiered at the Museum of Modern Art but Koch was unable to attend. The film opens in theaters nationwide on Friday.

Bloomberg joked about the timing, saying, “Leave it to Ed to leave just in time to maximize interest in ticket sales” of a movie about him.

The film begins with Koch describing how, as mayor, he would delight in looking out at the New York City skyline and remark to himself, “This is all mine. It’s extraordinary.”

“Here was a mayor who was a combination of a Lindy’s waiter, a Coney Island barker, a Catskill comedian, an irritated school principal and an eccentric uncle,” New York writer Pete Hamill said in a 2005 discussion of Koch’s legacy. “He talked tough and the reason was, he was tough.”

Born into a Jewish immigrant family in the Bronx on Dec. 12, 1924, Edward Irving Koch went on to attend City College and earn a law degree from New York University.

He entered politics in the 1950s in Manhattan’s Greenwich Village neighborhood, winning a seat on the city council, and later went to Washington, where he served four terms in the U.S. House of Representatives.

In 1977, he ran for mayor of New York City, and proved to be an agile campaigner. To combat rumors he was gay, former beauty queen Bess Myerson began appearing by his side at campaign events.

Koch later admitted the two were never romantically involved. Koch remained a bachelor all his life and refused to answer questions about his sexuality even in his later years.

After two successful terms in office – he was returned for a third term with 70 percent of the vote – Koch’s star had begun to fade. A corruption scandal involving his ally, Queens Borough President Donald Manes, never implicated Koch, but it damaged his reputation with voters.

Koch’s attempt at a fourth term failed when he lost his party’s nomination to Manhattan borough president David Dinkins, a man as quiet and deliberative as Koch was outspoken and abrasive. Dinkins would go on to be the city’s first black mayor.

“People became tired of Koch’s personality,” said Mitchell Moss, the director of the Urban Research Center at New York University. “He was a remarkable mayor but one with a big mouth. After 12 years you have to change the lyrics.”

After leaving office, Koch wrote articles on everything from Middle East politics to movie reviews, hosted a radio show and served as a judge on television’s ““The People’s Court.” His book about another former New York City mayor, Rudy Giuliani, was titled “Giuliani: Nasty Man.”

He remained a formidable figure in New York politics until his death, endorsing candidates and offering political commentary on the local NY1 television station. He has been a supporter of New York’s current mayor, Michael Bloomberg, and in 2010 he formed New York Uprising, a political action committee designed to fight corruption in state politics.

In 2008, Koch announced he had secured a plot in Manhattan’s Trinity Cemetery, telling the New York Times: “The idea of leaving Manhattan permanently irritates me.”