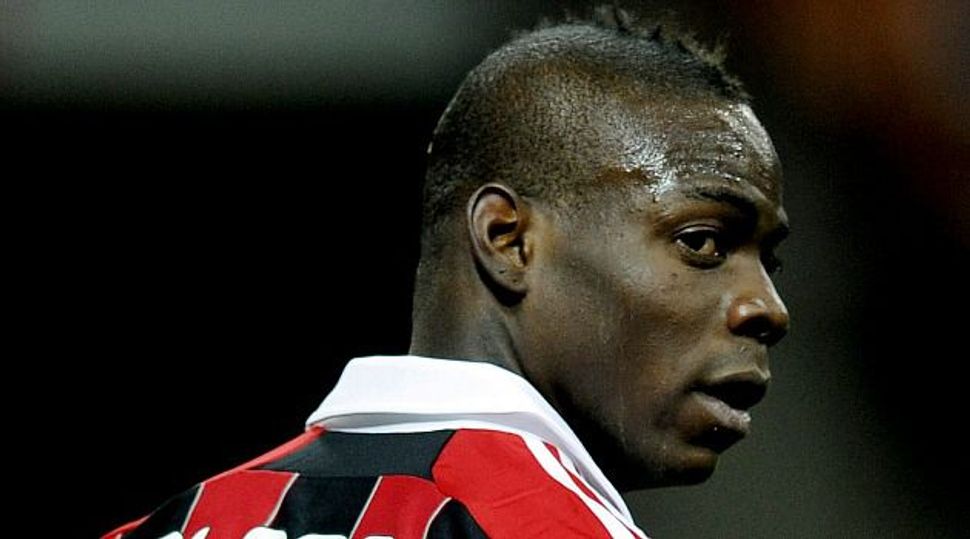 Jewish ?Boy?: Mario Balotelli was an orphan and was raised by a Jewish family in Italy. Image by getty images

A video of his comments, made on Sunday after a political event, was going viral after it was posted on various websites, including Tuttosport (www.tuttosport.com).

“And now let’s go and watch the little black boy of the family, the crazy head,” Paolo Berlusconi says in the video.

A spokesman for the Serie A club said on Wednesday there would be no comment on the video, which was recorded on the day Balotelli made his debut for AC Milan after being transferred from English Premier League club City last month.

Criticism of Paolo Berlusconi’s remarks took off after foreign media began writing about the video, which had received relatively little attention in the Italian press in the past few days.

“Balotelli is back in Italy for 2 minutes and already had racist comments made about him. Why do black players even play in Italy?,” one person tweeted.

Other tweets slammed the comments as “appalling”, “gross” and “idiocy”.

After making the “little black boy” remark, Paolo Berlusconi told his listeners at the event for a local centre-right candidate: “All the young ladies are invited as well – you can even have a chance to meet the president” – an apparent reference to his older brother Silvio, who is club president.

While Paolo was taking the heat for his comments, Silvio Berlusconi was still under fire over his motivation for bringing the hot-tempered Balotelli back to Italy in the first place, having previously said Milan did not need a “rotten apple”.

For the past week, former prime minister Silvio has been the regular butt of jokes by comedians and attacks by his political rivals over the transfer, which they see as a clear attempt to woo Italian soccer fans to vote for his centre-right coalition.

Last week L’Unita, the paper of the main centre-left party, said nationwide fans of Milan, who won the Italian championship in 2011 but are now fourth in the Serie A standings, could influence about 1.3 percent of the vote.

L’Unita said thrusting Balotelli into the election campaign was “the devil’s touch”, a play on words because Milan’s mascot is a red-and-black devil.

Another paper said the move was so blatantly political that it called Balotelli “Candidate Mario,” in an editorial.

Balotelli is no stranger to racism, real or perceived.

He was born in Sicily to Ghanaian parents and given up for adoption to an Italian family at the age of three. He grew up in northern Italy and became an Italian citizen at 18.

Both in Italy and during the 2012 European soccer Championship co-hosted by Poland and the Ukraine he endured monkey chants and bananas thrown on the pitch.

He seemed to anger racist fans more than other black players in Italy, precisely because he is Italian and not a foreigner.

When Balotelli played for Inter Milan, rival Juventus fans once shouted: “There are no black Italians.”

Last month Silvio Berlusconi defended his players for walking off the pitch during a friendly match against lower division team Pro Patria, when Ghanaian midfielder Kevin-Prince Boateng and two of his team mates were subjected to monkey chants and jeers from opposition fans.