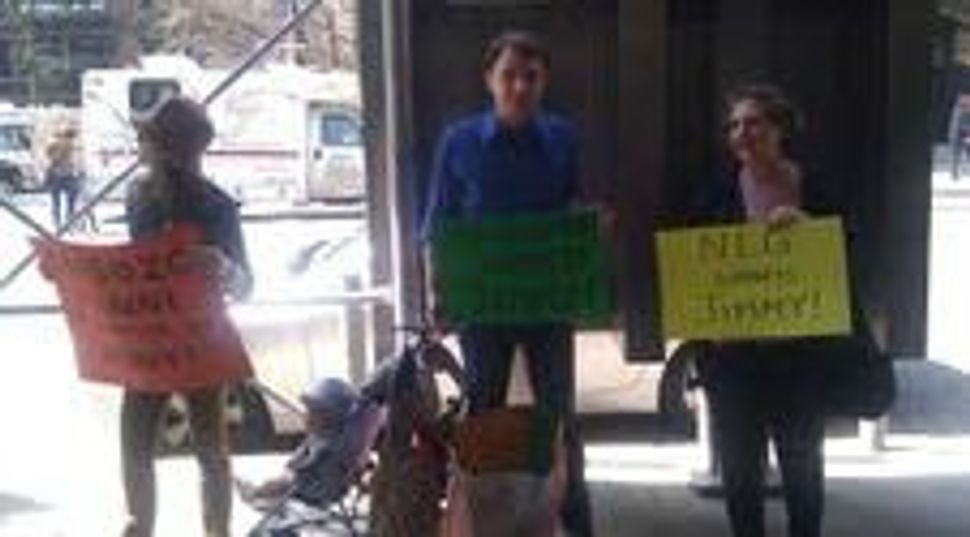 No Outrage: Only a handful of protesters showed up at Yeshiva?s Cardozo Law School for an award ceremony honoring Jimmy Carter ? and they supported the ex-president.

A planned protest of former President Jimmy Carter’s appearance at Yeshiva University’s Cardozo School of Law fizzled as he came to accept an award at the downtown Manhattan campus. 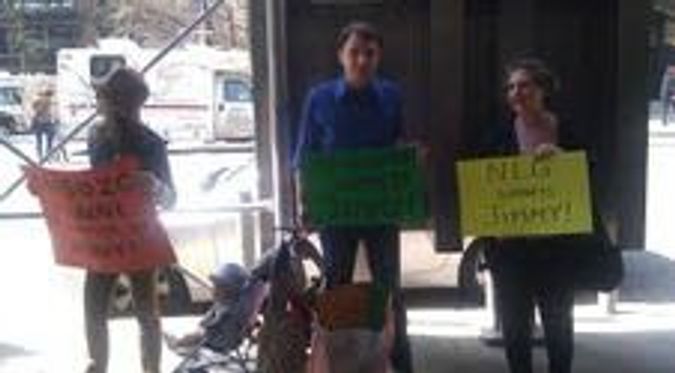 No Outrage: Only a handful of protesters showed up at Yeshiva?s Cardozo Law School for an award ceremony honoring Jimmy Carter ? and they supported the ex-president.

In an email to the Forward on Wednesday, Daniel Rubin, 62, who earlier said a dozen former alumni were planning an act of civil disobedience in anticipation of the ceremony, announced the protest was scrapped.

“Other Cardozo opponents to the Carter visit have cordially requested that we back off from civil disobedience,” Rubin wrote.

Carter was named the most recent recipient of the International Advocate for Peace Award, given annually by Cardozo’s Journal of Conflict Resolution. The announcement drew criticism from some alums, including a group separate from Rubin, The Coalition of Concerned Cardozo Alumni, who said that Carter has a “record of slandering Israel,” and an “ignominious history of anti-Israel bigotry.”

On Tuesday, the Zionist Organization of America and National Council of Young Israel spoke out against Carter’s Award. On Wednesday, the Simon Wiesenthal Center and the Anti-Defamation League voiced their disapproval of the event.

Despite the presence police barricades and several officers on the scene, the only protestors to arrive before the event were five individuals supporting Carter — and protesting the cancelled protest.

Jeanne Mirer, a member of Jewish Voice for Peace, said Carter’s position was “rational” and the negative reaction towards his appearance was “irrational.”

“I’m glad that the administration stood behind the students,” she said.

Y.U. President Richard Joel said in a statement on the Y.U. website that the award was “solely the initiative” of the student journal and not the university or the law school.

Ben Joslin, a 2012 graduate of the law school, said he came to show that all Cardozo alums didn’t share the opinion of groups like the Coalition.

“I’m glad they didn’t come,” he said of the protestors. “It would’ve created an ugly scene.”

Maria Chickedantz, also a 2012 alum, said she was “appalled” by some of the statements being made about Carter’s history on Israel. With her husband, Ben Dictor, they created the Progressive Cardozo Alumni Network to counter the “bullying of a public figure” like Carter.

Dictor, a 2012 graduate, said it was incongruous for law school alums to stifle debate.

“That is how we resolve conflicts,” he said. “If we didn’t have debate, we wouldn’t have jobs as lawyers.”

Dictor added that contrary to the views of the Coalition, Jimmy Carter is a “symbol of conflict resolution.”

Though the five pro-Carter protestors were the only ones with signs—aside from a random protestor shouting anti-Semitic statements unrelated to Carter’s appearance—not all passersby agreed with their sentiment. One current Cardozo student, who did not want to be named, said Jimmy Carter should have accepted Alan Dershowitz’s challenge to a debate.

“He’s been an obstacle to peace,” said Kirshenbaum, who heard of a protest among Y.U. alums on Facebook, but had not materialized by the time Carter arrived shortly after 3 p.m.

The pro-Carter protestors shortly disbanded before 3:30 p.m., after all of the visitors in attendance for the ceremony had entered the building. The event was closed to media.