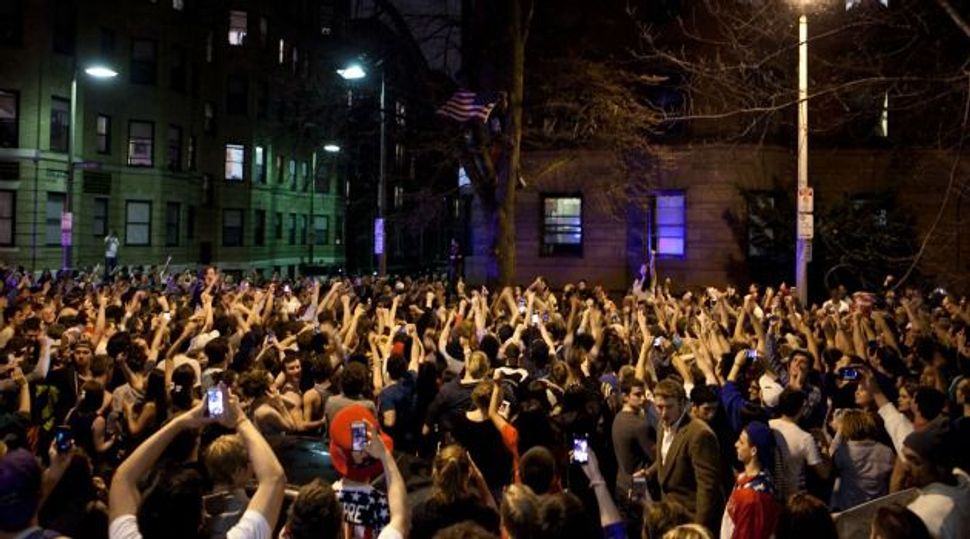 End of Lockdown: Jubilant crowds gathered in Boston after authorities arrested the second suspect in the Marathon terror bombing. Image by getty images

As news spread that police had captured the second man suspected of setting off two bombs on Monday at the Boston Marathon, killing three and injuring 176, the streets of Boston and Watertown erupted into thunderous applause and cheers.

Less than 24 hours earlier, the first suspect was killed during a firefight with police. Officials identified the captured suspect as Dzhokhar Tsarnaev, 19, and said the dead suspect was his brother, Tamerlan Tsarnaev, 26.

After hours of anxious waiting, Boston Mayor Thomas Menino tweeted “we got him” after police took the Dzhokhar Tsarnaev into custody. Later Menino tweeted a picture of himself and Governor Deval Patrick shaking hands with the word “Teamwork.”

Exhausted residents of Watertown, a working-class neighborhood 5 miles (8 km) from Boston, went outside for the first time in hours and applauded police as officers and cars left the scene. Residents spent much of the day indoors as police conducted a door-to-door search for Tsarnaev.

In Boston, people streamed into the streets, cars honked their horns and crowds gathered near the finish line of the marathon, which is still roped off as a crime scene four days after the bombings.

Student Jean Caron came out to cheer police, clapping as each cruiser passed. “They deserve it. It’s unbelievable what they had to go through the past few days,” Caron said. Police honked horns and ran sirens to acknowledge the cheers.

It has been a wrenching week marked by death, injury and a tense manhunt for the two suspected bombers.

Amid the Friday night celebrations, there was a feeling among some that the bombs had shattered a sense of safety and openness Boston.

Rich Havens, who serves as the race’s finish area coordinator, has been waiting anxiously for some break in the case. He and hundreds of others were forced to run for cover as the bombs ripped through the crowds on Monday.

“Certainly it is a great relief that the two suspects have been dealt with,” he said. “This is going to give us some closure for the 117th Marathon and allow us to finally clean up the streets, return them to traffic, and look ahead to next year.”