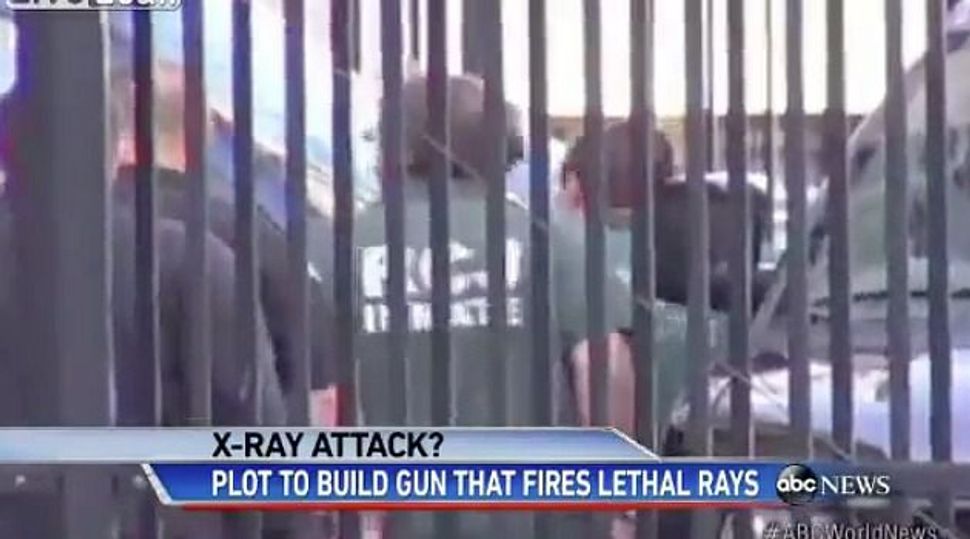 With Friends Like These: White supremacists suspected in a bizarre plot involving a radiation ?death ray? device are led to federal court in upstate New York. Image by youtube

An alleged member of the Ku Klux Klan tried to sell a mobile device to New York Jewish groups that “could be used by Israel to defeat its enemies.”

Glendon Scott Crawford, 49, was arrested Tuesday following a more than one-year-long FBI sting operation, accused of developing a remote-controlled, truck-mounted device that would deliver lethal doses of radiation to human beings. The charges were made public in federal court in Albany on Wednesday.

Crawford and a second suspect, Eric Feight, 54, were charged with conspiracy to provide material support to terrorists, including use of a weapon of mass destruction. The men could be sentenced to 15 years in prison if found guilty.

The FBI opened an investigation in April 2012 when Crawford, an industrial mechanic for General Electric Co., allegedly visited a synagogue in Albany and “asked to speak with a person who might be willing to help him with a type of technology that could be used by Israel to defeat its enemies, specifically, by killing Israel’s enemies while they slept,” according to the complaint

He also called other Jewish organizations in Albany and made the same offer, according to the complaint. A synagogue secretary contacted the police, who contacted the FBI, which began to monitor Crawford.

Crawford identified himself “a member of the Ku Klux Klan, specifically, the United Northern & Southern Knights of the Ku Klux Klan” in a telephone call recorded by the FBI, according to the Albany Times Union. He also is listed as member of Americans Demanding Liberty and Freedom, a Tea Party group.

The men never obtained a radiation source and the device was not completely built at the time of their arrest, officials told the Times Union.