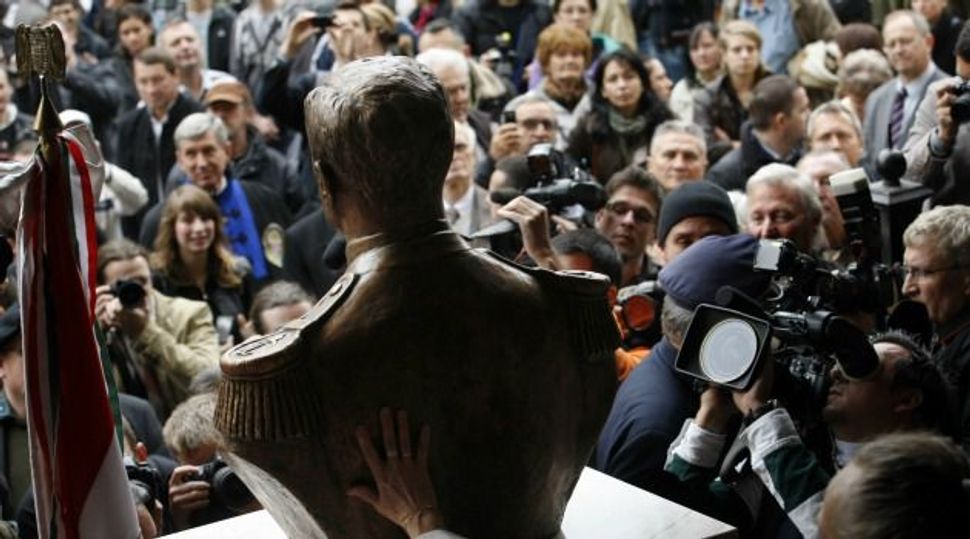 Hungary’s far-right Jobbik party unveiled a statue of wartime leader Miklos Horthy, who presided over the country’s alliance with Nazi Germany, in Budapest on Sunday, sparking protests and highlighting concerns about anti-Semitism in the country.

About a thousand Hungarians took to the streets of the capital to denounce the statue while the mayor of central Budapest and parliamentary leader of the ruling Fidesz party, Antal Rogan, warned the bust would provide an excuse to paint an unfair picture of extremism in Hungary.

Jobbik has stoked anti-semitism in the country, vilifying Jews and Israel in speeches in parliament, where it is the third-biggest party.

One of the organizers of Sunday’s ceremony was Jobbik’s deputy parliament group leader Marton Gyongyosi, who sparked outrage last year when he called for lists of people in Hungary with Jewish ancestry to be drawn up. He later apologised and said he had been misunderstood.

“As downtown mayor I consider the statue unveiling ceremony of Marton Gyongyosi a political provocation and I condemn it,” Rogan said in a statement. “This provocative action will obviously give the western European left-wing press an excuse to cry anti-Semitism and paint a malicious picture of Hungary.”

Protesters gathered in a light drizzle near a church in central Budapest where the large bronze bust of Horthy was put on display at the gates, a stone’s throw from the country’s neo-gothic Parliament building.

“It is outrageous that the new fascists erect a statue to Horthy, who is responsible for the Nazi rule and the Holocaust in Hungary,” said Bence Kovacs, a 22-year-old student who pinned a yellow Star of David to his chest in protest.

Hungary, which is struggling to return to growth after two bouts of deep recession in the wake of the global economic crisis, will hold parliamentary elections next April or May with Jobbik set to win 8-9 percent of the vote, according to latest opinion polls.

The far-right has held Horthy in high regard. He ruled Hungary for 24 years in an increasingly radical political era and, as head of state in the early years of World War II, entered an uneasy alliance with Nazi Germany.

In 1944 the Nazis occupied Hungary and with Horthy still in office about 437,000 Jews were deported over a period of 56 days, most to their deaths, according to Budapest’s Holocaust Memorial Centre. The total number of the Hungarian Jewish victims during the Holocaust exceeded half a million.

Horthy’s role in that process has been debated but no compromise has been reached yet about his place in history. The far-right credits him with saving Hungary after the disaster of World War I, while leftists consider him a Nazi collaborator.

“To call Horthy a war criminal is unjust and historically wrong,” Jobbik representative Lorant Hegedus told Reuters after the unveiling ceremony. “He was not treated as a war criminal in Nuremberg, so why treat him like one now?”

Horthy testified as a witness at the Nuremberg trials after World War II but avoided prosecution and eventually died in exile in Portugal in 1957.

Gyongyosi told the unveiling ceremony that Horthy was the greatest Hungarian statesman of the 20th century.

The government has said that Hungarians had a role in the Holocaust and that the country would pursue a policy of zero tolerance against racial hatred and anti-Semitism.

Hungary still has one of the largest and oldest Jewish communities in Europe, mostly in the capital.

While there is a revival of Jewish culture, the far-right has remained strong and anti-Semitism, as well as hatred toward other minorities like homosexuals or the Roma, is still a serious problem.

“We have tried and failed so many times to face our past,” said former liberal lawmaker Imre Mecs, who protested against the statue. “This must happen for us to make any progress lest we will fall further behind the rest of Europe.”

“An economy can only be built atop a sound democratic foundation,” said Mecs, 80, who said the way Germany dealt with its own past after World War II was exemplary.

On the opposite side of the square near the church, pro-Horthy supporters shouted racial and anti-Semitic slurs at the opposition protesters. Lajos Molnar, 93, waved a photograph that he claimed showed that he served in Horthy’s police during the war.

“Horthy never hurt the Jews,” Molnar said. “It was Hitler not him who deported the Jews … Without Horthy Hungary would not exist today because the great powers of the world would have destroyed it like they planned to.”