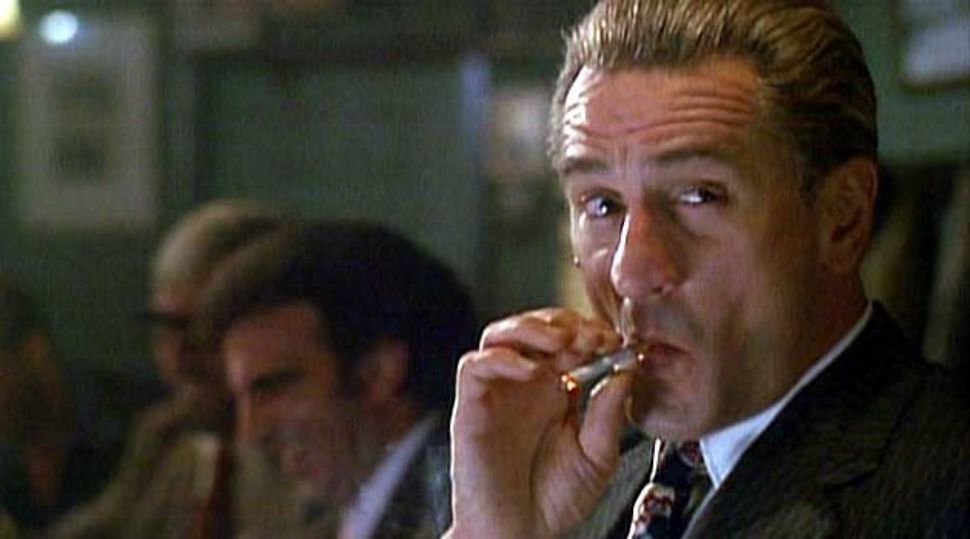 Case Closed? Robert De Niro starred in ?Goodfellas?, which was based on the story of the notorious Lufthansa heist.

Five people said to be part of a New York crime family were arrested on Thursday, including a 78-year-old man accused of participating in a notorious 1978 airport heist that inspired the movie “Goodfellas.”

More than three decades after $5 million in cash and $1 million in jewelry was stolen from a Lufthansa airlines cargo building at John F. Kennedy International Airport, the FBI arrested Vincent Asaro, an alleged leader of the Bonanno organized crime family, on robbery charges.

Four other men, who prosecutors said were members of the New York-based gang, were arrested for other crimes.

The infamous crime was spurred by a tip by a Jewish bookmaker. And a key break in the case came when the feds recently found the remains of another Jewish reputed gangster buried at a mobster’s property. He died when he was strangled by a dog chain after fellow mob associates suspected he was a stool pigeon.

“Vincent Asaro devoted his adult life to the Bonanno crime family, with a criminal career that spanned decades,” said U.S. Attorney Loretta Lynch in a statement. “Neither age nor time dimmed Asaro’s ruthless ways, as he continued to order violence to carry out mob business in recent months.”

At the time of the JFK caper, the currency was being shipped to a U.S. bank from West Germany and the theft was the biggest cash heist ever in the United States. The stolen $5 million in cash would be worth $17.9 million in 2013 dollars, according to the Bureau of Labor Statistics.

“These ‘goodfellas’ thought they had a license to steal, a license to kill, and a license to do whatever they wanted,” said George Venizelos, FBI assistant director-in-charge, in the New York field office.

“It may be decades later, but the FBI’s determination to investigate and bring wiseguys to justice will never waver,” he said.

Robert De Niro played James “Jimmy the Gent” Burke, in “Goodfellas,” the popular 1990 Martin Scorcese movie adapted from the non-fiction book “Wiseguy.” Burke was affiliated with the rival Lucchese crime family and the suspected mastermind of the brazen crime that stumped investigators for decades.

“A lot of the main characters, like Burke, either died, disappeared or were murdered,” said Anthony DeStefano, a veteran New York crime reporter and author of the 2013 book “Vinny Gorgeous: The Ugly Rise and Fall of a New York Mobster.”

A break in the case came after an FBI investigation of a New York property tied to Burke last summer turned up human remains. Burke himself died in prison in 1996 while serving time for the murder of a drug dealer.

The Thursday indictment charges Asaro with the murder of Paul Katz in 1969, as well as robbery, conspiracy and other crimes tied to the 1978 heist.

Asaro and Burke strangled Katz with a dog chain because they thought he was cooperating with investigators, prosecutors said. His body was first buried in the basement of a vacant house in the New York borough of Queens and later moved to the location where it was found last summer, they said.

Court papers filed in New York charge Asaro with four criminal counts, including robbery and conspiracy to commit robbery, in connection with the Lufthansa heist.

He is also charged racketeering and extortion for other alleged criminal activity.

Vincent Asaro and his son, Jerome Asaro, 55, are charged with stealing $1.25 million in gold salts from a Federal Express employee in February 1984. They are also accused of robbery conspiracy in the theft of $1 million from an armored car in the mid-1980s.

Attorneys for the indicted suspects were not immediately available for comment.

The five men were due to be arraigned in U.S. District Court in Brooklyn on Thursday.

Much of the money from the 1978 heist has not been recovered, said DeStefano, who writes for Newsday: “Some of it went up the chain in tribute to the Luccheses, some of it went to Burke and his businesses and some of it is still unaccounted for.”

The original plot was hatched after bookmaker Martin Krugman tipped off mobsters about the untraceable millions. The Jewish bookie was later murdered.