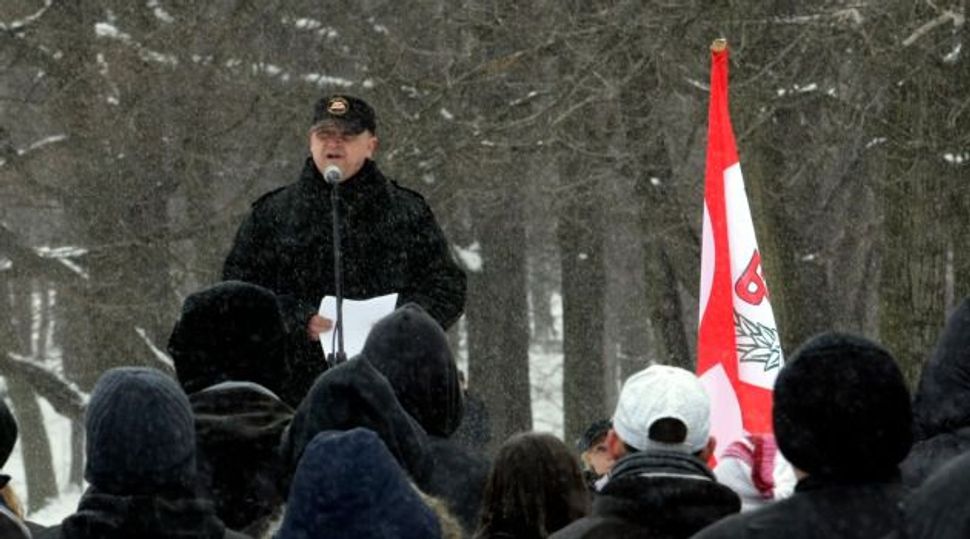 Hatred on the Rise: Hungarian neo-Nazis rally amid rising anti-Semitism. Image by gettyimages

The survey of 764 participants was conducted in December by the Median polling company and commissioned by the Action and Protection Foundation — a watchdog on anti-Semitism of the Jewish community.

The survey results were presented Monday at a news conference organized by the foundation at its Budapest headquarters.

Kovacs, who has conducted several previous studies on anti-Semitism in Hungary, added that among those who accepted some anti-Semitic stereotypes, the proportion of people who displayed open antipathy toward Jewish individuals increased dramatically in 2010, when the xenophobic far-right Jobbik Party entered parliament for the first time.

“There is a clear correlation between Jobbik’s entrance and the prevalence of anti-Semitism in polled populations,” he told JTA.

In the years 2003 to 2009, similar surveys showed an average of 11 percent of respondents harboring antipathy to Jewish individuals. That figures jumped to 28 percent in 2010, decreasing slightly to 24 percent in 2011 and to 21 percent in December 2013, as documented in the foundation’s survey.

The survey was released ahead of the biannual convention of the Rabbinical Centre of Europe, which brought several hundred Orthodox rabbis, many of them from the Chabad-Lubavitch movement, to the Hungarian capital.

The conference is taking place amid a dispute between the Jewish communities and the government over the government’s planned commemoration of the 70th anniversary of the Holocaust in Hungary. The Jewish umbrella group Mazsihisz has boycotted the unveiling of a statue that was perceived as glossing over Hungarian Holocaust-era culpability.

The government postponed the unveiling due to Mazsihisz’s opposition.

The Lubavitch-affiliated Unified Hungarian Jewish Congregation, or EMIH, which co-organized the conference, supported Mazsihisz’s opposition, according to Rabbi Shlomo Koves, a leader of EMIH.

“The conference is a sign of solidarity by European Jewry with the Jewish community of Hungary and a message that the best way to commemorate the Holocaust, is by celebrating Jewish life in Hungary today,” Koves told JTA.

Ferenc Kumin, a government spokesperson, told JTA the memorial was postponed because of the April 6 election, and that Hungary has accepted its culpability for the death of Jews during the Holocaust.