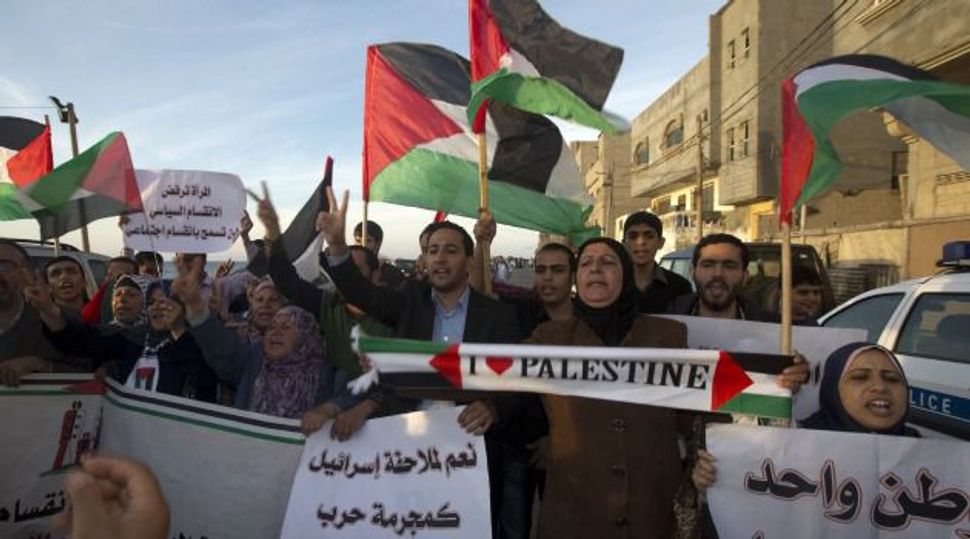 Israel’s Prime Minister Benjamin Netanyahu cautioned Palestinian President Mahmoud Abbas on Wednesday over just-revived unity talks with Hamas, saying he had to choose between peace with Israel or its Islamist enemy.

Delegates from Abbas’s Palestine Liberation Organisation (PLO) and Hamas representatives held a fence-mending session on Tuesday in the Gaza Strip, their first since a 2007 conflict in which forces loyal to Western-backed Abbas lost control of the enclave to the militant group, an opponent of peace with Israel.

The bid for reconciliation coincided with meetings between the Fatah-led PLO and Israeli negotiators to try to extend U.S.-sponsored peace talks beyond an April 29 deadline. Sources from both sides said strong disagreements remained after they convened in Jerusalem.

“Does he (Abbas) want peace with Hamas or peace with Israel?” Netanyahu asked, in remarks to reporters at a meeting with Austrian Foreign Minister Sebastian Kurz.

“You can have one but not the other. I hope he chooses peace. So far he hasn’t done so.”

Few Palestinians expect a breakthrough in the Hamas-Fatah deadlock that has paralysed Palestinian politics, and many have low expectations of any resolution to the seemingly endless duel.

But a Palestinian official who attended Tuesday’s meeting said there had been an “agreement in principle” on forming a “government of experts”, a term for a cabinet staffed by technocrats rather than politicians, possibly within five weeks.

Further talks in Gaza were planned for Wednesday.

But Palestinian hopes of reconciliation have been dashed before. Since 2011, Hamas and Fatah have failed to implement an Egyptian-brokered unity deal because of disputes over power-sharing and the handling of conflict with Israel.

An agreement, paving the way for elections and a national strategy towards Israel, could not only give Abbas a measure of sovereignty in Gaza but also help Hamas, hemmed in by an Israeli-Egyptian blockade, become less isolated.

In the troubled Israeli-Palestinian negotiations, both sides have said they are willing to extend the talks championed by U.S. Secretary of State John Kerry.

However, Netanyahu accused Abbas on Wednesday of making unacceptable demands. Meeting Israeli journalists on Tuesday, Abbas had said Israel should commit to freezing settlement activity on occupied land and focus on demarcating the borders of a future Palestine.

“We’re trying to re-launch the negotiations with the Palestinians,” Netanyahu said. “Every time we get to that point (Abbas) stacks on additional conditions which he knows that Israel cannot give.”

Abbas, whose Palestinian Authority exercises limited self-rule in the occupied West Bank, told reporters that if peace talks did not continue, Israel – as the occupying power in the territory – would be obliged to take on the administrative and financial burden of governing Palestinian areas.

Kerry revived the peace talks in July after a nearly three-year hiatus, with the aim of ending a decades-old conflict and establishing a Palestinian state alongside Israel.

The negotiations plunged into crisis this month when Israel refused to carry out the last of four waves of prisoner releases unless it received assurances the Palestinian leadership would continue the talks beyond the end of April.

After Israel failed to free the prisoners, Abbas responded by signing 15 international treaties, including the Geneva Conventions on the conduct of war and occupations. Israel condemned the move as a unilateral step toward statehood.