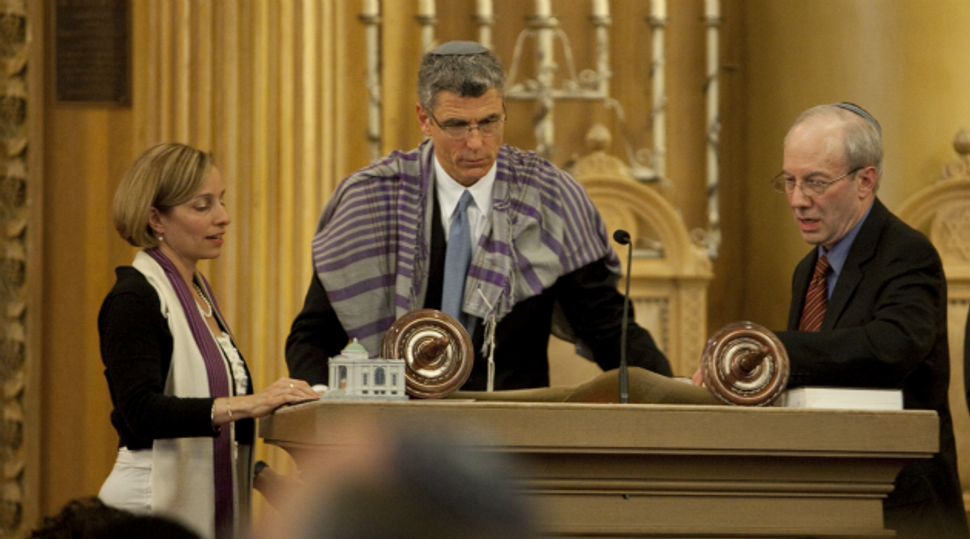 Nod to Change: Rabbi Rick Jacobs pointedly used his 2012 installation as head of the Union for Reform Judaism to symbolize big changes at the group. Image by CLARK JONES/URJ

(Haaretz) — Non-Jews have come to assume prominent roles in Conservative and Reform synagogues around America, in some cases accounting for a relatively large share of congregation membership, according to a prominent Israeli-born scholar who has been studying the changing face of American synagogues in recent years.

“Sometimes as many as half the people in a synagogue are either non-Jews or married to non-Jews, or have a close non-Jewish relative, said Yaakov Ariel, a professor of religious studies from the University of North Carolina at a recent two-day conference in Jerusalem on the growing appeal of Judaism worldwide.

Ariel, who has been focusing his fieldwork on synagogues in the southern United States, said the increased presence of non-Jews in these congregations had in many ways changed the discourse inside.

“Until a generation ago, even less, synagogues were very much Jewish tribal, cultural territory, a place where you could tell Jewish jokes, including silly Jewish jokes about the goyim, how they drink and we don’t,” he said. “But those are the kinds of things that can’t be said anymore. You can’t even use Yiddish terms like zei gezunt [be healthy] and gut yontif [happy holiday] anymore because these people didn’t grow up with this. And rabbis also have to take in consideration this new audience when they deliver their sermons.”

Ariel, co-director of the Center for Jewish Studies at the University of North Carolina, noted that many of the non-Jews attending services at Conservative and Reform synagogues were in romantic relationships with Jews, but not necessarily married to them.

In other cases, they were “spiritual seekers,” as he termed the phenomenon, drawn to Judaism’s “relative openness on social, cultural and religious issues.”

Most of these non-Jews, he said, come from a similar socioeconomic background as the Jewish congregants. “They are mainly white, middle-class and upper-middle-class educated professionals,” he noted. “If you are a member of the working class, you probably will not end up in a synagogue.”

Still, he said, in recent years these synagogues had become even more ethnically diverse. “There’s a growing percentage you notice these days in the synagogue who are black, Asians and of Latino background.“ He attributed much of this new diversity to Jewish couples adopting black, Asian and Latino babies.

In quite a few cases, Ariel observed, non-Jews served as presidents of their synagogue boards and were active on their various committees. “They are the Jews of the Jews,” said Ariel, suggesting that they are often even more engaged in congregational activities than their Jewish counterparts. “They are really interested in what Judaism has to offer spiritually and intellectually.”

While non-Jewish women were much more likely to convert to Judaism than non-Jewish men for their Jewish partners, non-Jewish men nonetheless, noted Ariel, tended to be active members of their synagogues. “What I’ve seen in many synagogues is these men coming and joining in for years, and sometimes after many years of raising Jewish families or families that are both Jewish and not Jewish, they decide that they officially want to become Jewish because they are actually Jewish, and it’s time to accept that and make it more affirmative.”

An even more recent phenomenon, he noted, was mixed couples affiliated with more than one religion. “They go on Saturday to synagogue and on Sunday to the Episcopal church or the Presbyterian church,” he said. “If you think there’s no such thing as being a member of both a Jewish community and a non-Jewish community, think again.”

The increased presence of non-Jews, said Ariel, had caused the “ethnic, cultural and tribal atmosphere” characteristic of the synagogue in the past to be replaced by a more “spiritual and religious” ambience.

Although the conventional wisdom is that Reform congregations are more accepting of non-Jews in their midst than are their Conservative counterparts, Ariel said that movement affiliation was not always a factor.

“My studies show that actually the differences are more between congregations, and in some Reform congregations, the rabbi is actually more orthodox – not in the sense that he’s more observant, but that he goes by the book.”