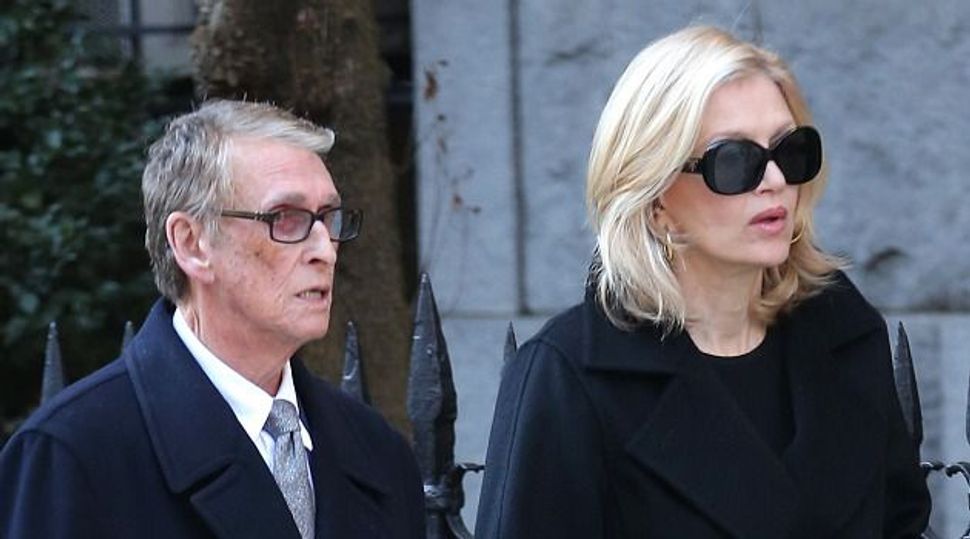 (Reuters) — Mike Nichols, a nine-time Tony Award winner on Broadway and the Oscar-winning director of films such as “Who’s Afraid of Virginia Woolf,” “The Graduate” and “Carnal Knowledge,” died on Wednesday at age 83, ABC News said.

The prolific director passed away at his home of cardiac arrest, his spokeswoman said. A private service for the family will be held this week, followed by a memorial at a future date.

No director ever moved between Broadway and Hollywood as easily as Nichols and he was one of the few people to win Oscar, Tony, Emmy and Grammy awards.

Nichols, whose career first blossomed with a comedy partnership with Elaine May in the late 1950s, was married to Diane Sawyer, former anchorwoman of ABC’s “World News Tonight” broadcast. ABC News President James Goldston announced his death in a memo to news staff, saying Nichols “passed away suddenly on Wednesday evening.”

“In a triumphant career that spanned over six decades, Mike created some of the most iconic works of American film, television and theater,” Goldston said. “He was a true visionary.”

Fans and colleagues took to Twitter to express their sorrow.

Actor Tony Goldwyn said Nichols was the greatest of the great. “What a gigantic loss!” he added.

Nichols was born Michael Igor Peschkowsky in Berlin, where his parents had settled after leaving Russia. He came to the United States at age 7 when his family fled the Nazis in 1939.

He grew up in New York feeling like an outsider because of his limited English and odd appearance – a reaction to a whooping-cough vaccine had caused permanent hair loss. As a University of Chicago student, he fought depression but found like-minded friends such as May.

In the late 1950s, Nichols and May formed a stand-up team at the forefront of a comedy movement that included Lenny Bruce, Jonathan Winters and Woody Allen in satirizing contemporary American life. They won a Grammy in 1961 for best comedy album before splitting, partly because May liked to improvise and Nichols preferred set routines.

Nichols came to be a directing powerhouse on Broadway in the mid-1960s with “Barefoot in the Park,” the first of what would be a successful relationship with playwright Neil Simon. Later he would do Simon’s “The Odd Couple,” “Plaza Suite” and “The Prisoner of Second Avenue” and Time magazine called him “the most in-demand director in the American theater.”

“I never worked with anyone in my life – nor will I ever work with anyone – as good as Mike Nichols,” Simon told the New Yorker.

When he was ready to try movies, Nichols made an impact on American cinema with three influential movies in a five-year period.

The first starred Elizabeth Taylor and Richard Burton in a 1966 adaption of the Edward Albee play “Who’s Afraid of Virginia Woolf.” It was nominated for an Oscar in all 13 categories in which it was eligible and won five of them, although Nichols did not take the best director award.

He followed that up a year later with “The Graduate,” starring a little-known Dustin Hoffman as an aimless college graduate seduced by an older woman before falling in love with her daughter. Nichols was rewarded with an Academy Award for his direction and the movie, thanks to several memorable lines and the music of Simon and Garfunkel, became a ’60s cultural touchstone.

In 1971, Nichols put out “Carnal Knowledge,” which created a sensation because of its sexual nature. The manager of a theater in Georgia was arrested for showing the film and had to appeal his case to the U.S. Supreme Court before being exonerated.

Sometimes Nichols’ movies did go off the road. “Catch-22,” “Day of the Dolphin” and “The Fortune” were generally considered unsuccessful and he did not make a feature film from 1975 until rebounding with 1983’s “Silkwood,” for which he was nominated for another Oscar.

In the second act of his movie career he also directed “Heartburn,” Simon’s “Biloxi Blues,” “Postcards from the Edge,” “Regarding Henry,” “The Birdcage,” “Primary Colors,” “Charlie Wilson’s War” and “Working Girl,” which earned him another Oscar nomination.

In the mid-1980s, Nichols suffered a psychotic breakdown, which he said was related to a prescription sedative, that made him so delusional he thought he had lost all his money.

Despite his urbane, intellectual manner, Nichols once had a reputation as an on-the-set screamer. Meryl Streep told the Hollywood Reporter, “He was always the smartest and most brilliant person in the room – and he could be the meanest, too.”

The actress said that changed after Nichols married Sawyer, his fourth wife.

Nichols had three children from his earlier marriages.