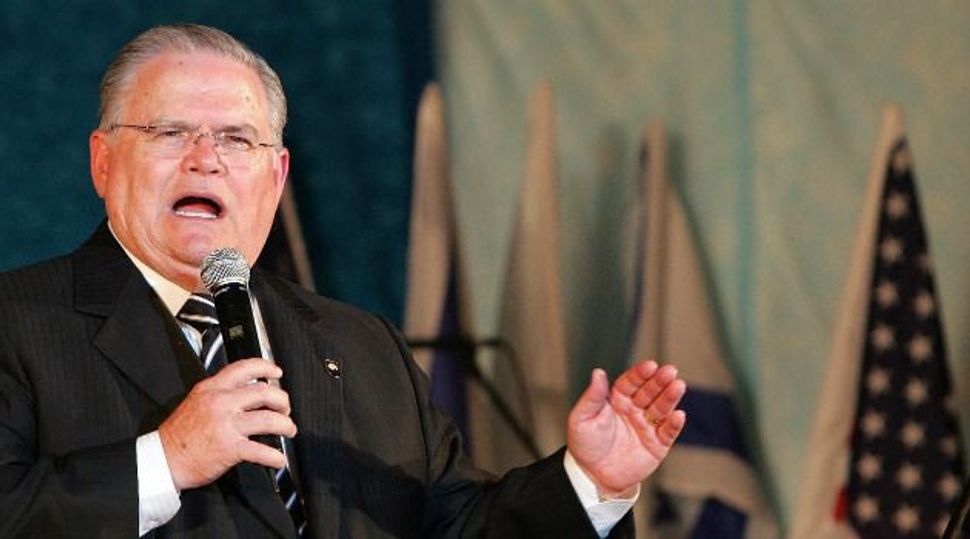 Pro-Israel: U.S. pastor John Hagee speaks during a visit with Evangelical Christians to the Israeli settlement of Ariel. Image by Getty Images

After discussing the controversy with Jewish leaders, Pastor John Hagee “clarified” that he did not mean to call President Obama anti-Semitic, but anti-Israel.

“The prepared text of my remarks before the Zionist Organization of America called President Obama one of the most ‘anti-Israel’ presidents in U.S. history,” the Christians United for Israel founder said in a statement Friday, referring to his speech Nov. 23 to the ZOA annual dinner in New York.

“During my speech, I inadvertently called him one of the most ‘anti-Semitic’ presidents in history,” he said.

Hagee said he was issuing his clarification after “conversations with friends in the pro-Israel community,” including Robert Sugarman and Malcolm Hoenlein, respectively the chairman and executive vice chairman of the Conference of Presidents of Major American Jewish Organizations.

The Anti-Defamation League had slammed Hagee for the jibe, calling it a “serious denigration and distortion of the term.”

“While I regret my misstatement, I stand behind my prepared remarks,” Hagee said in his statement. “I believe that those of us who love Israel must be aggressive in our criticism thereof.”