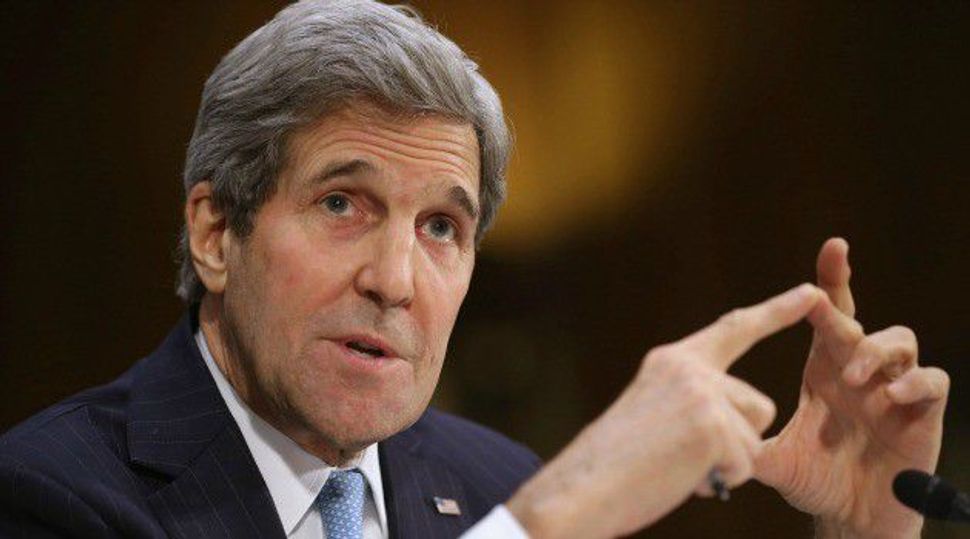 Israel said it hoped the United States would veto any moves at the United Nations to set a time frame for its withdrawal from territory Palestinians seek for a state, but a senior U.S. official said it was too early to say.

U.S. Secretary of State John Kerry will meet Israeli Prime Minister Benjamin Netanyahu in Rome on Monday to discuss various proposals for a Palestinian state that are circulating at the United Nations.

Later on Monday, Kerry will travel to Paris for talks with European counterparts and then on to London to meet Palestinian chief negotiator Saeb Erekat and a delegation from the Arab League, who will urge the United States not to use its U.N. Security Council veto to block the proposals.

The hastily-arranged meetings suggested urgency in America’s drive to manage efforts among Security Council members to draft a new proposal before Israeli elections in March. Kerry said on Friday he wanted to defuse tensions during the talks.

Jordan has circulated a draft Palestinian resolution to the 15-member U.N. Security Council calling for Israeli occupation of Palestinian territory to end by November 2016, and the Palestinians said on Monday they could submit it in the coming days.

France, Britain and Germany are discussing another proposal, but a senior U.S. official said there was no consensus among them and the United States had not been asked to take a position.

A senior Western diplomat said the Europeans were aiming for a consensus resolution devising a binding, unspecified, time frame and felt the Americans were now open to that possibility.

“There is a window of opportunity now, there is a willingness from them to consider … options at the Security Council,” the diplomat said.

But a senior U.S. State Department official said Washington had not yet decided that a Security Council resolution was the right way to go.

“These things are all very much in flux, it’s not as if we’re being asked to take a position on any particular Security Council resolution right now. It would be premature for us to discuss documents that are of uncertain status right now.”

A statement issued after a Palestinian leadership meeting convened by President Mahmoud Abbas in Ramallah said the resolution will be submitted to the U.N. Security Council after Kerry’s meeting with the Arab League delegation.

A Palestinian official who spoke to Reuters on condition of anonymity said the resolution will be presented on Wednesday.

Israel’s Strategic Affairs Minister Yuval Steinitz told reporters: “I assume an anti-Israeli proposal will draw a U.S. veto. That’s how it’s always been, and that’s what we hope will happen.”

But Israeli Foreign Minister Avigdor Lieberman, speaking on Army Radio, said it appeared the United States “is not eager to use its veto” on the Palestinian statehood issue but was seeking “maximum coordination” with Netanyahu.

Netanyahu and Washington have clashed frequently over Israeli settlement in the West Bank and East Jerusalem, territory Israel captured in the 1967 Middle East war, leading to Israeli media speculation that a frustrated United States could soften its opposition to unilateral statehood steps.

The senior U.S. official said the common objective was to reduce tensions and try to coordinate with the various parties.

“We all want to keep open the hope of a two-state solution and we all want to prevent to the best of our abilities an escalation of the violence on the ground,” the official said.

Unilateral efforts at the U.N. by Palestinians to form their own state in the occupied West Bank and the Israeli-blockaded Gaza Strip, with East Jerusalem as its capital, follow the collapse in April of peace negotiations with Israel brokered by Kerry.

If the United States pushes the Europeans to wait until after Israel’s elections, the Jordanians could put forward the Palestinian-drafted resolution for a vote in January. Netanyahu said the resolution and its two-year deadline were dangerous.

“This will bring the radical Islamic elements to the suburbs of Tel Aviv and to the heart of Jerusalem,” he told his cabinet. We will not allow this. We will rebuff this forcefully and responsibly. Let there be no doubt, this will be rejected.”

The U.S. official indicated Washington did not think the Palestinian draft was acceptable.

“The Palestinian draft through the Jordanians contains a hard deadline for the withdrawal from the West Bank of two years, so that is not the way we would look at handling a very complicated security negotiation by simply mandating a flat deadline of two years,” the official said.

Israeli officials, who asked not to be identified, said Israel was wary of any resolution that would lay down a timetable for either talks or a withdrawal.

Netanyahu has said rocket fire from the Gaza Strip during a 50-day war with Hamas militants in July and August highlighted the risks Israel could face in handing over more Palestinian territory.

In Jerusalem, violence has surged in recent weeks because of a dispute over access to a holy site in an Israeli-annexed part of the city. Eleven Israelis and 12 Palestinians have been killed.

In Gaza, Hamas paraded some 2,000 of its armed fighters and truck-mounted rockets on Sunday, marking its 27th anniversary with its biggest show of force since the end of the Gaza war this summer.