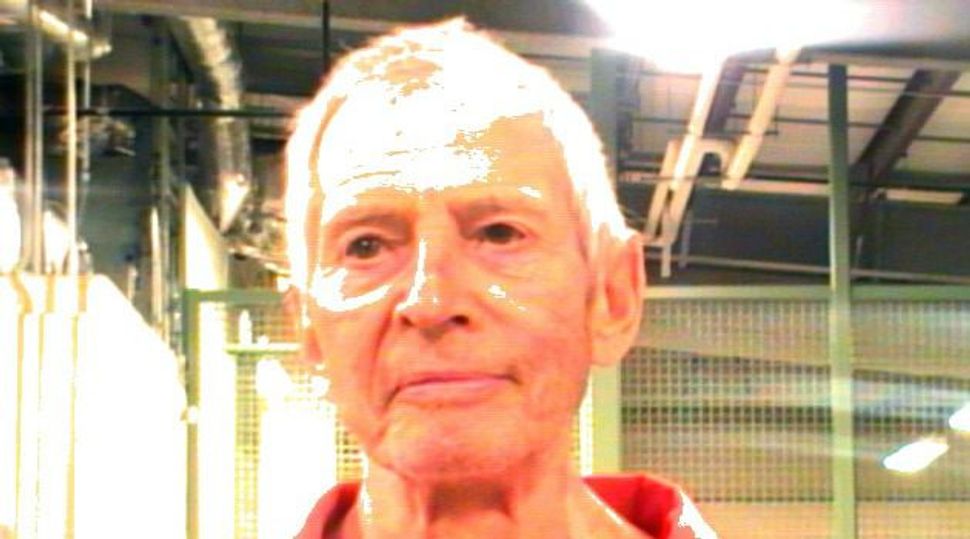 New York real estate scion and accused murderer Robert Durst’s bathroom muttering that he “killed them all” would likely be admissible evidence in a murder trial, legal experts said on Monday.

Durst, the subject of a six-part HBO documentary series called “The Jinx: The Life and Deaths of Robert Durst,” was picked up by a filmmaker’s microphone apparently acknowledging his crimes and admitting that he was “caught.”

He was formally charged on Monday in the first-degree murder of a longtime friend, writer Susan Berman, in a 15-year-old cold case. Also on Monday, Durst agreed to be extradited to Los Angeles County from New Orleans.

He could face the death penalty in the case, which was filed by Los Angeles District Attorney Jackie Lacey with special circumstances. He is accused of murdering Berman two days before Christmas in 2000.

Long estranged from his powerful family with its major New York real estate holdings, the eccentric Durst has been tried and acquitted in the death of another person in Texas and was a suspect in the disappearance of his wife.

Considered a flight risk, he was arrested on Saturday at a New Orleans hotel on a warrant from Los Angeles County, according to a police report, which noted that he was in possession of a revolver.

He was taken into custody the day before his chilling statement aired during the final minutes of the HBO series.

Whether Durst’s apparent confession will be admissible at trial would likely be the subject of a pre-trial hearing that would “certainly be the centerpiece of the legal battle,” said Robert Mintz, a former federal prosecutor now at the McCarter & English law firm.

“It turns on whether or not there was an expectation of privacy,” he added.

Paul Callan, a former New York City homicide prosecutor, believes the statement will be admitted as evidence because Durst could not have had an expectation of privacy in a public restroom when he was wearing a microphone.

The only way Durst’s lawyers could challenge it, Galluzzo said, aside from showing that the recording has been tampered with, is to assert that the HBO filmmakers were acting as agents of law enforcement.

Series director Andrew Jarecki, speaking on Good Morning America on Monday, said he was unaware of the apparent confession for more than two years after it was recorded, and that his team reached out to law enforcement after an editor discovered it during a review of the tape.

“We’ve been in contact with law enforcement for the past two years,” he said. “And so, when we finally found that subsequent admission, what happens in the bathroom, we contacted them and we said we have something more.”

Durst, 71, maintained his innocence after the possible confession.

“We’re ready to go to California and to have a trial,” defense attorney Dick DeGuerin said after Durst appeared in a New Orleans court in an orange jumpsuit and handcuffs.

The Los Angeles Police Department said the timing of Durst’s arrest had nothing to do with the finale of the documentary.

Officer Rosario Herrera said on Monday she could not comment on whether detectives were aware of the finale and its contents.

“The arrest was made through evidence,” she told Reuters, declining to say what that evidence revealed.

The warrant, issued on Wednesday by Los Angeles County, is for the death of Susan Berman, whose body was discovered in her West Los Angeles home on Christmas Eve in 2000, authorities said.

Durst was booked on Monday in a New Orleans jail on charges of being a felon in possession of a firearm and possessing a firearm with a controlled substance, according to court records. A state police official told the Times-Picayune newspaper that the substance was marijuana.

Berman, a friend from graduate school, served as Durst’s spokeswoman after his first wife disappeared, according to the New York Times.

Durst was questioned but not charged in the death of Kathleen Durst in 1982, and he was acquitted of murder in a third case in 2001.

In the final installment of the HBO series, Durst was talking to himself when he appeared to say he carried out all three killings.

The documentary showed an interview session during which he rejected a piece of evidence against him. Durst then went to the bathroom, still wearing the microphone, when he whispered, “There it is, you’re caught… What a disaster.”

He added: “What the hell did I do? Killed them all, of course.”

Durst’s transfer to California is being held up as local prosecutors in New Orleans weigh bringing unspecified charges against him, his attorney said.