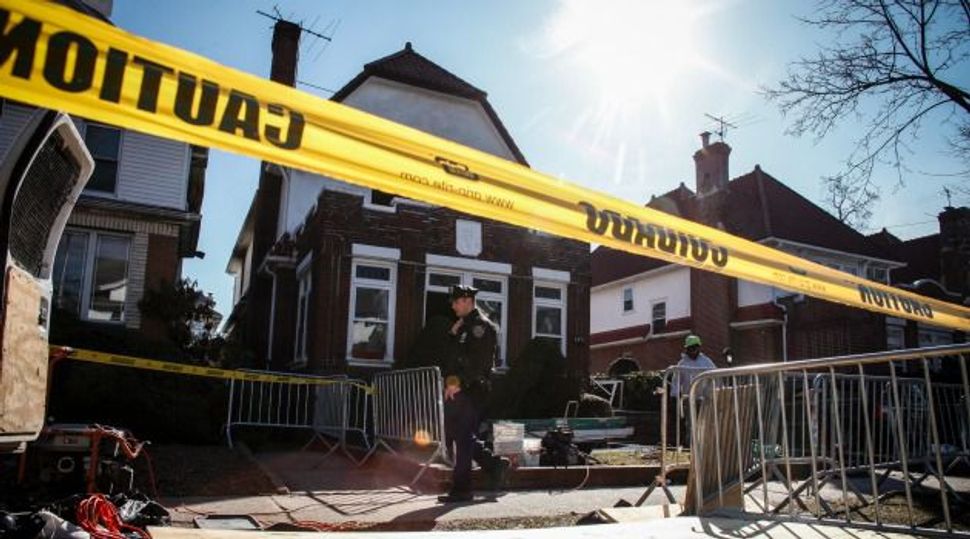 The funeral of seven Orthodox Jewish children who perished in one of New York’s deadliest fires in years drew a sea of mourners on Sunday to a Brooklyn neighborhood where the blaze has raised concerns about the safety of Sabbath cooking practices.

The Brooklyn father who lost seven of his eight children in the home fire called his kids “a sacrifice” to the community.

Gabriel Sassoon sobbed as he tried to recite the names of his late children — saying they were “angels” — during a eulogy Sunday at a Jewish funeral home in the heavily Orthodox Jewish Borough Park section of Brooklyn, the New York Post reported.

“They all had faces of angels. Hashem [God] knows how much I love them,” Sassoon said, according to the Post.

He was out of town at a religious conference when the fire consumed his home shortly after midnight Saturday. Officials have blamed an unattended hot plate warming Shabbat meals as the cause of the fire that raced through the home at around 12:30 a.m. on Saturday, killing the children, ages 5 to 16.

His wife, Gayle, 45, and one of his daughters, Tziporah, 15, both escaped the blaze by leaping from the house but are fighting for their lives in the hospital. They are unaware of the seven deaths.

About 1,000 people lined the street outside the Shomrei Hadas funeral home for the service, according to the Post. Inside, an overflowing crowd of mourners wailed for the lost children.

The bodies were expected to be flown to Israel for burial in Jerusalem.

“They were a burnt offering,” Sassoon said of his children. “I lost everything in the fire. Seven pure sheep. Those are my seven children.”

Gayle Sassoon reportedly had planned to take the children out of town for the weekend — to her parents’ home in southern New Jersey — but stayed home because of a snowstorm that hit the New York area.

Around the corner from the home, the Fire Department of New York handed out pamphlets titled “Fire Safety for Jewish Observances” as well as smoke alarms and batteries.

Jewish rules in observance of the Sabbath day of rest, which lasts from sundown Friday to sundown Saturday, prohibit turning on and off electric appliances and prohibit all other forms of what is considered work, said state Assemblyman Dov Hikind, who represents the heavily Jewish district.

“A lot of people use these hotplates to keep food warm for the next day,” Hikind said. “They put them on on Friday and they are left on for the entire Sabbath, 25 hours.”

An online version of the FDNY pamphlet about dangers during the Sabbath and Jewish holidays tops the list with the warning: “Stay in the kitchen – don’t leave cooking food unattended.”

Hikind said he uses a water-filled urn that he heats up before the Sabbath starts at sundown every Friday night.

“I called my own daughter, who has six kids, to tell her to stop using that hot plate,” he said.

It was the city’s fourth deadly fire in 15 years sparked by hotplates or use of ritual candles, according to the Jewish Forward newspaper, including a 2000 fire in Williamsburg that killed the granddaugther of the Satmar Grand Rabbi Moshe Teitelbaum and her 5-month old baby.

Hikind said that scam artists immediately launched a phony fundraising scheme in the Sassoon family’s name, and he warned followers on Twitter not to contribute.

“People’s heart aches – Jew and non-Jew alike. They want to help. We don’t want you to waste your money,” he later told Reuters.

Although smoke alarms are required on every floor of a home, according to a fire department spokesman, The New York Times reported the Sassoon home only had a smoke alarm in basement.

The fire department did not immediately respond to questions about the home’s smoke alarms or about previous deadly fires tied to religious observances.