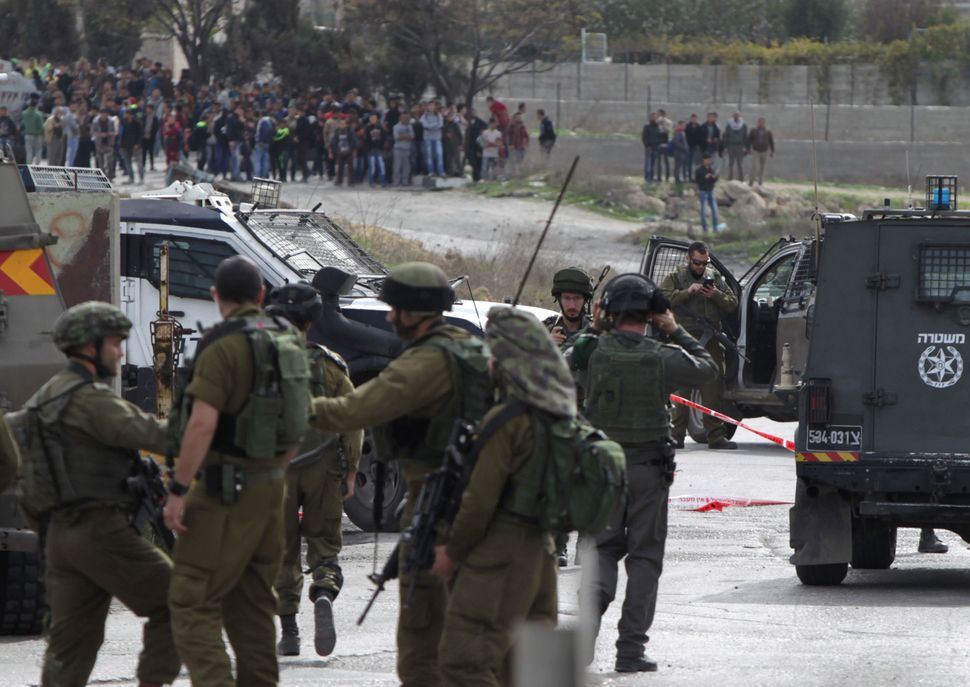 Military commanders and the Netanyahu government sparred over the right strategy to end two months of stabbings, shootings and car-based attacks on Thursday as Israeli troops killed two Palestinians involved in violence in the occupied West Bank.

The violence, much of it carried out spontaneously by young Palestinians, has killed 19 Israelis and an American since Oct 1. Israeli forces have killed 90 Palestinians, some while carrying out assaults and others in clashes with police and troops. Many of those killed have been teenagers.

While the bloodshed has been stoked in part by Muslim anger over Jewish visits to the Aqsa mosque compound in Jerusalem – a site holy to both Muslims and Jews, who refer to it as Temple Mount – Israeli security services have echoed Palestinian officials in identifying failed peace talks as another cause.

That conflicts with the Israeli government’s view that the main driver is incitement by the Palestinian leadership and weak security enforcement by President Mahmoud Abbas.

On Thursday, Israeli soldiers raided the village of Katane, near the Palestinian city of Ramallah, in what the army said was a search for suspected militants and weapons. It said locals threw petrol bombs and rocks at the soldiers, who opened fire at one of them after riot-dispersal measures failed.

Separately, paramilitary Israeli police shot dead a Palestinian who they said charged at them with a knife at a checkpoint on a junction near the West Bank city of Nablus. The Palestinian health ministry said the dead man was 51.

Also in Nablus, Israeli forces impounded eight buses, the owner of the vehicles said. The army said the bus company was linked to militants from the Islamist group Hamas and had mobilized Palestinians for violent demonstrations.

U.S. Secretary of State John Kerry, whose bid to broker a deal on Palestinian statehood alongside Israel stalled in early 2014, visited on Tuesday for talks with Abbas and Israeli Prime Minister Benjamin Netanyahu on how to stem the violence.

On Thursday, the commander of Israel’s premier paratrooper brigade, Colonel Nimrod Aloni, said tackling Palestinian violence was a matter of “a great degree of confusion.”

“Is there a chance of winning? I think this is really, really not a military question, that it is very, very much linked to government decisions,” he told Israel’s Army Radio. “At this stage we are playing defense, almost at our goal-line, and trying to prevent the next terrorist attack from happening.”

Palestinian leaders have accused Israel of excessive force and blamed the violence on Israel’s 48-year-old occupation.

A Palestinian official, who asked not to be identified, said Kerry had asked Abbas to try to achieve at least a week of calm to persuade Netanyahu to pursue confidence-building measures.

Israeli military officers, as well as foreign observers, have credited Palestinian security forces with containing some of the violence with preemptive arrests of potential militants.

A senior Israeli official on Thursday was dismissive about the misgivings being sounded by the military, saying there was no internal division over how to tackle Palestinian violence.

Energy Minister Yuval Steinitz said that in addition to killing or capturing Palestinian attackers, Israeli forces were taking deterrent steps such as demolishing the homes of militants and closing a West Bank radio station for incitement. He said Abbas’s official television station should be shuttered.

“We are already taking vigorous action which I have no doubt will deliver results,” Steinitz, a member of Netanyahu’s security cabinet, told Israel Radio. “This may require weeks more. It could also be that it will require months more. But the terror will not defeat us, we will defeat the terror.”—Reuters