Spanish Leftists Under Fire for ‘Anti-Semitic’ Depiction of Barack Obama 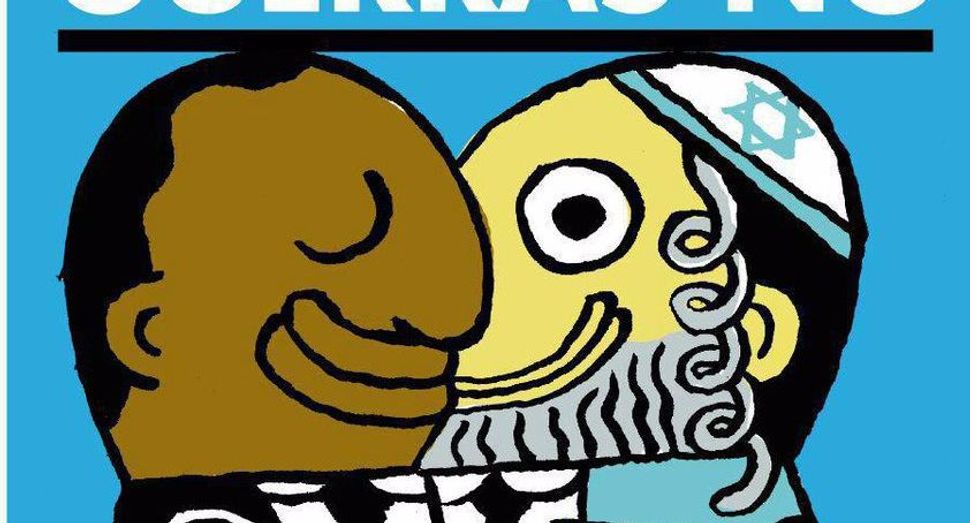 — Spanish Jews condemned a left-wing party’s use of alleged anti-Semitic imagery to protest against President Barack Obama’s upcoming visit to the country.

The Madrid branch of Izquerda Unida, or United Left, on Thursday tweeted the controversial image, which shows a depiction of a thick-lipped Obama standing behind a wall amid explosions while hugging an Orthodox Jew with a kippah emblazoned with the Star of David and clutching a wad of money bills sticking out of the Jew’s pocket. It used the hashtag #ObamaGoHome.

United Left, which has eight lawmakers out of 350 in the Spanish congress, later tweeted a picture of Israeli Prime Minister Benjamin Netanyahu visiting in hospital a victim of a terrorist attack. “But if only there was an opportunity to visit wounded soldiers of the Islamic State.”

In far-left circles across Western Europe, many have claimed there exist equivalence, cooperation or both between Israel and that terrorist group.

“United Left is entraining the most repugnant anti-Semitic stereotypes with this image,” the Federation of Jewish Communities of Spain,, of FCJE, wrote in a statement Friday, “in accordance with the Nazi paper Der Sturmer, trying to caricaturize and vituperate with unfounded and defamatory myths, both blacks and Jews, as well as stable democracies such as the United States and its ally, Israel.”

ACOM, a Madrid-based group devoted to advocating Israel’s position in Spain and fighting attempts to boycott the Jewish state, called on authorities to take action against the people responsible for disseminating the image.

“In any civilized country, public prosecutors would do their jobs and the parties responsible would have been detained by police,” ACOM said in its statement Thursday. “We urge the relevant authorities to end their inaction and resume their responsibilities.”

Separately, a Spanish court earlier this month ordered the suspension of motions supporting a boycott of Israel, which were approved in April by the municipality of Barberá del Vallès in the autonomous region of Catalonia. In keeping with ruling by higher legal instances in Spain over the past year, the Fifth Administrative Court of Barcelona ordered the motion be scrapped because it risks encouraging discrimination.

Spanish Leftists Under Fire for ‘Anti-Semitic’ Depiction of Barack Obama