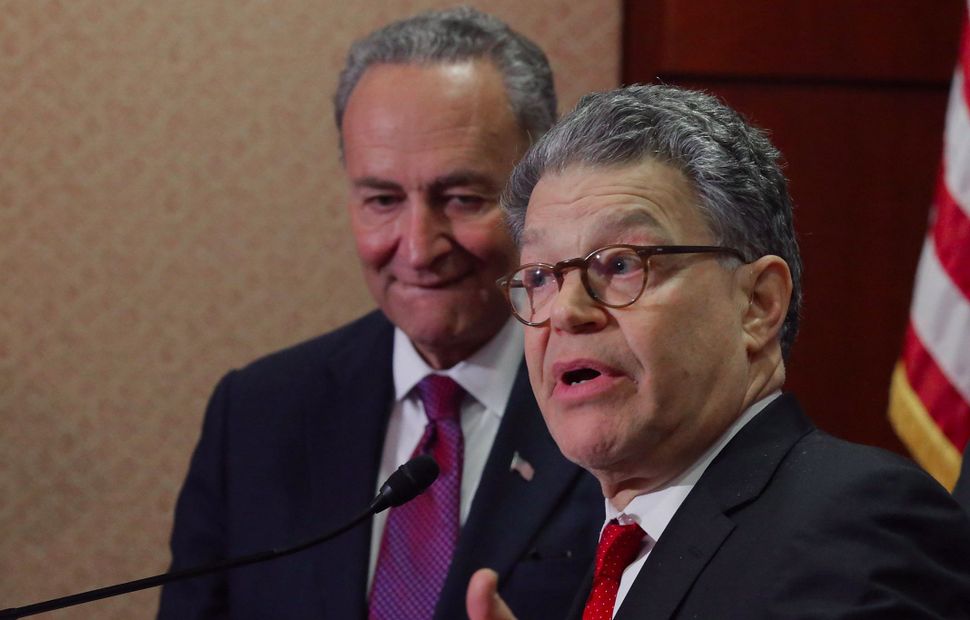 Hillary Clinton is on the hunt for the perfect person to play Donald Trump as she gears up for the presidential debates. Among the requirements? Being as brash as the Republican presidential candidate, who did not stop short last month of  the parents of a fallen Muslim-American soldier.

“It needs to be someone who is naturally smart, glib and utterly irreverent,” seasoned Democratic debate coach Bob Shrum said of the person to impersonate Trump during debate prep, according to Politico.

With a little over a month left until the first presidential debate, which takes place Sept. 26 at Long Island’s Hofstra University, Clinton has to make a choice soon. Here is the lowdown on the Jewish sparring mates she is said to be considering, as well as a few others she might want to add to the list.

The Minnesota senator is being considered as a possible Trump, according to Politico. Frankel, a Democrat, hasn’t been shy about his support for Clinton — he said in June he’d be happy to serve as her running mate. A former “Saturday Night Live” writer and performer, Franken could probably do a convincing Trump impression. He knows how to turn humor against his opponents, having written a number of political books — “Rush Limbaugh Is a Big Fat Idiot” and “Lies and the Lying Liars who Tell Them” among them — that showed him capable of biting insults, a Trump specialty.

The brash lawyer and self-described “loudmouth New Yorker” seems like an ideal pick to play Trump — and he agrees. “I think I could do a pretty good Donald Trump impression,” he told Politico. But while he said he would be happy to lend Clinton a hand, he denied a WNYC report that he had already been contacted by the campaign.

We can see why the Clinton campaign is reportedly considering the owner of the Dallas Mavericks basketball team and “Shark Tank” reality show investor. Like Trump, he is a billionaire entrepreneur and not afraid to show it (his Twitter picture shows him on a plane with a cigar in his mouth and the NBA championship trophy on the seat next to him). He’s also a vocal opponent of Trump, who recently said on a “Late Show” segment dissing the candidate, “I’ve got a travel tip for you. When you’re going through customs and they ask if you have anything to declare, try not to blurt out ‘bankruptcy.’” Cuban told Politico he would be “happy to” portray the real estate mogul as Clinton prepares to face him one on one.

The irreverent former “Daily Show” host could be the perfect choice to play Trump. Like the Republican presidential nominee, he knows how to rile up audiences, and taking jabs at politicians seems to come naturally. Last year, Stewart even did a credible Trump imitation alongside Stephen Colbert on “The Late Show.”

The comedian and actress knows all too well the challenges facing women in the spotlight, including Clinton — such as being criticized for their appearance, physical strength and personal relationships. Schumer, who doesn’t shy away from calling out sexism when she sees it, can guide Clinton on how to call out her Republican rival on women’s issues.

The Vermont senator already knows many of Clinton’s strengths and weaknesses from their debates during the Democratic primaries, when they were both fighting for the nomination. And while Sanders, an Independent, and Trump have vastly different political views, they share a populist and anti-establishment appeal that Clinton lacks.

The Supreme Court justice hears arguments for a living. Ginsburg also has gone at it with Trump — he recently called for her resignation after she told The New York Times she “can’t imagine what the country would be — with Donald Trump as our president.”

Known as the “Roastmaster General,” Ross has served as the emcee on raunchy Comedy Central roasts of celebrities — including Trump — and appears in “Jeff Ross Presents Roast Battle,” in which comics compete in one-on-one insult contests. (Sound familiar?) Ross can channel Trump’s pugilistic style and coach Clinton on crafting the perfect comeback. The comedian has even said he is willing to moderate a Clinton-Trump roast — er, debate.

A lot of people saying I should be the moderator between Donald & Hillary. #settlethebeef @slim https://t.co/DEU6eaKEkB

The radio show host doesn’t shy away from vulgarity — he’s known for speaking candidly about sex and inviting strippers to his program. Stern also knows Trump well, having interviewed him numerous times. He could remind Clinton of some of Trump’s less-than-presidential sound bites, including the Republican nominee saying he tends “to like beautiful women more than unattractive women” and his vivid descriptions of his sex life. The “King of All Media” would likely be ecstatic to coach Clinton, of whom he said he is “absolutely enamored.”