On Jews And The Holocaust, Trump Tries To Show That He Finally Gets It 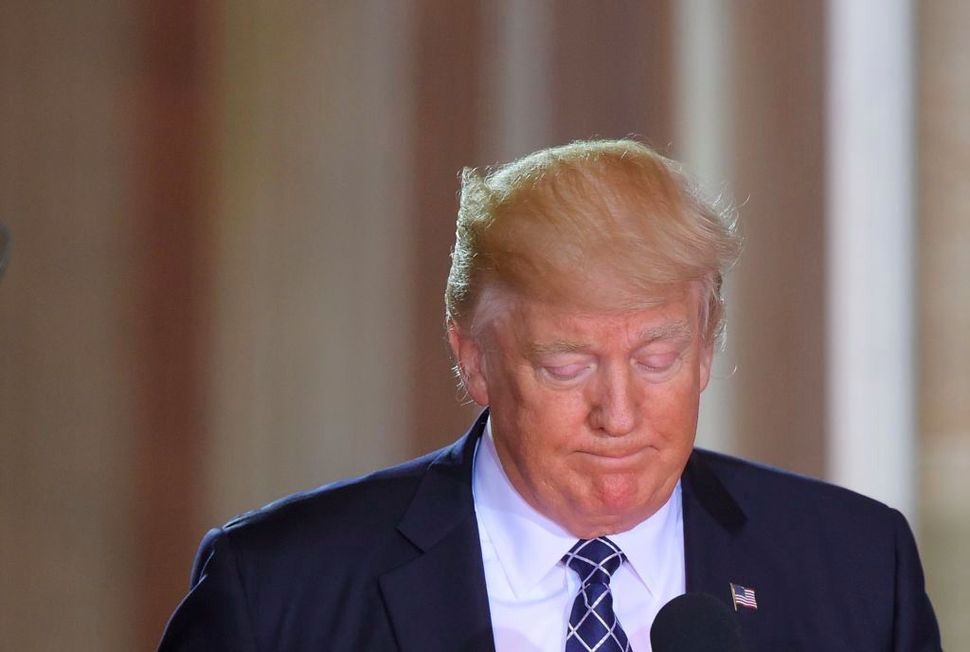 WASHINGTON (JTA) – President Donald Trump got the memo on the Holocaust and the Jews — at least for now.

In a barrage of statements this week from the president and his aides, the Trump administration wants you to know, he gets it, he really gets it: The Holocaust describes a genocide committed only against one people, the Jews.

It’s a radical departure from the first days of the Trump administration, when a statement marking International Holocaust Remembrance Day omitted any mention of Jews. That was made worse, in the eyes of most of the Jewish establishment, when Trump staffers further blurred the distinction between the Jewish genocide and the sufferings of other groups during World War II.

Trump made the distinction clear in his speech Tuesday at the annual Days of Remembrance commemoration in the U.S. Capitol Rotunda organized by the U.S. Holocaust Memorial Museum.

“The Nazis massacred 6 million Jews,” he said. “Two out of every three Jews in Europe were murdered in the genocide. Millions more innocent people were imprisoned and executed by the Nazis without mercy, without even a sign of mercy.”

Trump made the same distinction a day earlier in his proclamation declaring the Days of Remembrance and also on Sunday in a video address to the World Jewish Congress. The State Department last week held a ceremony honoring Chiune Sugihara, the Japanese consul to Lithuania who provided transit visas to Japan for 6,000 Jews, saving their lives.

Trump taking out time to keynote the museum event Tuesday was in itself significant. Presidents have appeared at the event, but their presence is not routine, and this week isn’t exactly a down week for the administration with a government shutdown looming.

And his embrace of Jewish sensibilities about the Holocaust was robust, extending to an excoriation of Holocaust denial, a rejection of anti-Semitism overall and a defense of Israel.

A number of Jewish groups, among them groups that had been harshly critical of Trump’s past fumbling of the issue, welcomed the turnaround. In some cases, the compliments seemed almost backhanded, giving Trump credit for simply getting his facts right.

Jason Isaacson, the American Jewish Committee’s associate director for policy, praised Trump for his “forthright message of fidelity to historical accuracy, empathy with the Jewish people, and commitment to combat all forms of hatred and violence towards Jews.”

Anti-Defamation League CEO Jonathan Greenblatt, who has had a contentious relationship with the administration, said he looked “forward to working with the president and his administration to put his pledge into action.”

So what moved Trump? A variety of factors might have been in play:

Much has been made of the fact that Trump’s daughter, Ivanka, and her husband, Jared Kushner – both unpaid White House staffers – are Jewish, as are some of his top aides.

Ivanka Trump, in her own Holocaust remembrance message, made clear how personal the week was to her and her husband.

“I want my children to live in a world where every country and its leaders pledge to ensure a genocide like the Holocaust will never happen again,” she said. “I want them to grow up in a world where people are tolerant, inclusive and loving toward one another.”

The next day, on a visit to Berlin for the G20 women’s summit, Ivanka Trump visited the city’s Holocaust memorial.

Israeli Prime Minister Benjamin Netanyahu has been outspoken in his praise of Trump, and rarely misses an opportunity to compare him favorably to his predecessor, Barack Obama.

The same goes for Israeli Ambassador Ron Dermer, one of Netanyahu’s closest advisers. In his own address in the Capitol on Tuesday, Dermer flattered Trump explicitly and derided the Obama administration implicitly by comparing their approaches to Syria.

“History shows that indifference has been the rule, not the exception,” Dermer said. “The exceptions have been decisions like the one President Trump made this month to respond to a chemical attack by the Assad regime against innocent men, women and children. That decision was a defiance of indifference.”

Obama, notably, did not strike Syria after a 2013  attack much worse than the one earlier this month that killed 89 civilians in rebel-held territory. Instead, his threats to strike led to negotiations that culminated in a deal in which Syria promised to divest itself of its poisonous gases.

Dermer, however, took aim at Obama’s stated preference for “soft power” and seemed to allude to a campaign by Obama’s wife, Michelle, to raise awareness of victims of the Islamist Boko Haram group in Nigeria, who kidnapped 276 schoolgirls.

“Those contemplating evil should know that they will face more than the soft power of self-righteous condemnations and feel-good hashtags,” he said.

Trump was impressed and extemporized a thank you to Dermer in his speech that immediately followed.

“We are privileged to be joined by Israel’s ambassador to the United States, friend of mine — he’s done a great job and said some wonderful words — Ron Dermer,” he said.

Trump in his video address to the World Jewish Congress was similarly effusive in praising the group’s president, Ronald Lauder.

“I want to thank Ronald Lauder not only for his many years of friendship — and he truly has been my good friend, he even predicted early that I was going to win the presidency — but also for his leadership of this organization,” the president said.

Lauder, notably, was the only Jewish leader to give Trump a pass for his botching of the Holocaust remembrance message in January. An old acquaintance of Trump’s, the cosmetics executive has for decades been deeply involved in Holocaust remembrance. The message: Flattery may work better with Trump than confrontation.

Stephen Bannon in the shadows

The adviser to Trump most in sync with the “alt-right,” the loose-knit assemblage of anti-establishment conservatives where soft denial of the Holocaust has found a home, is Stephen Bannon, who is believed to have been behind the January statement.

Trump recently demoted Bannon, pulling him off the National Security Council, and is said to be frustrated by Bannon’s hard-line ideological fixations, believing they are obstructing his efforts to pass legislation through an ideologically diverse Congress. Moreover, Bannon has clashed with Kushner, and Trump always sides with family first.

Who needs the headache?

Fairly or not, another Trump adviser, Sebastian Gorka, has been driven to distraction by allegations of his associations with the Hungarian far right. He stormed off a Georgetown University panel after students at the university confronted him with questions about those allegations.

As Trump scrambles to name accomplishments in his first 100 days in office, distractions about what the Holocaust means is exactly what he does not need.

Tensions between Trump and the wider Jewish community will not likely disappear anytime soon. A key lesson of the Holocaust for many Jews – one Dermer mentioned – is that they should keep their eyes wide open for any likelihood of genocide against any people. Other presidents marking Holocaust remembrance have noted contemporary threats; Trump spoke only vaguely of “stamping out prejudice.”

“This spirit should not be restricted to Holocaust Remembrance Day,” Greenblatt said in his statement. “We very much hope the president will continue to use his bully pulpit to speak out against anti-Semitism, bigotry, and hatred in all forms. We urge the president and his administration to act to protect targeted communities against hate crime and discrimination.”

On Jews And The Holocaust, Trump Tries To Show That He Finally Gets It