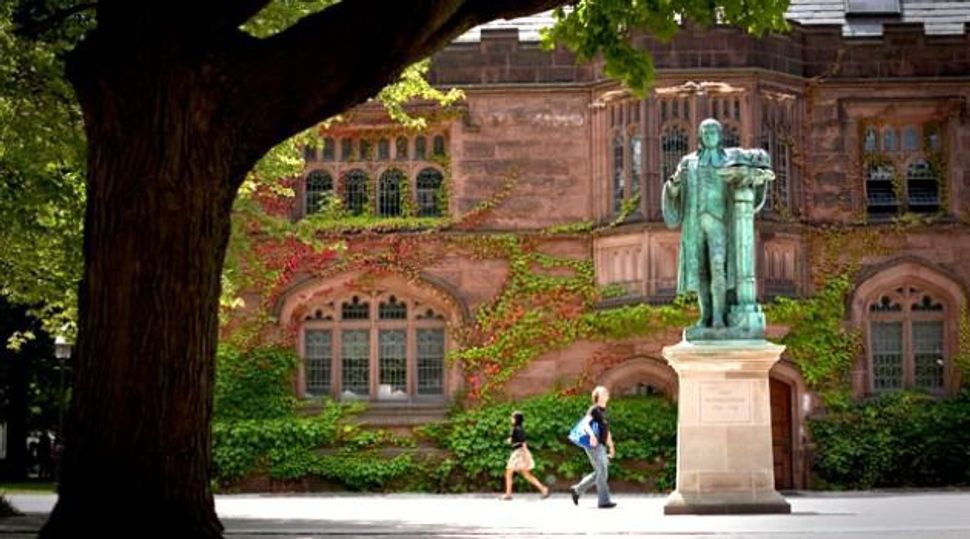 A faculty petition recently appeared in The Daily Princetonian calling for the university to divest from companies operating in the West Bank. The Center for Jewish Life, Princeton’s Hillel, quickly responded with a letter stating that the CJL is “taking the best, positive strategic approach to defeat this action.”

As a Jewish undergraduate at Princeton, the CJL is a very important community to me. I go there every day, and most of my experiences are overwhelmingly positive. I am consistently impressed by the dedication of the CJL staff to their students.

I view the CJL as my home on campus, and so I was particularly surprised by the CJL’s letter. Because I am an observant Jew who cares deeply about Israel and opposes the Israeli occupation of the West Bank, I was upset by the letter’s implication that such opposition is an unquestioned assumption in our community. Along with many other Jewish students, I signed an open letter to the CJL and Hillel International, explaining my discomfort with the CJL’s stance.

Our letter did not take a stand on the issue of divestment itself. Rather, we asked for the CJL to refrain from taking a unilateral position where there is no consensus in our community. I do not oppose people speaking out against the faculty petition. The counter-petition signed by many faculty members and a petition created by Tigers for Israel, an Israel advocacy student group, are both legitimate and worthwhile. What I do oppose is the CJL, an organization meant to represent all Jews on campus, making a statement about Israel as if it were unanimous. This complex issue calls for ideological diversity and discussion, not a top-down initiative to “defeat this action” that alienates students.

I decided to participate in this open letter because I felt the need to clear up misconceptions for members of the wider campus community. My non-Jewish friends on campus know I have strong ties to the CJL. People will attribute the CJL’s positions to me, because the CJL is the de facto voice of the Jewish community on campus. But it is unwise for the Jewish community to present itself as ideologically monolithic vis-à-vis Israel. Princeton is a diverse and intellectually exciting campus. Debate is welcome and nuance is encouraged. The CJL does not make itself — or Judaism, or Israel — look good when it pushes these values aside.

I also fear that the CJL’s response tells Jews who question Israel’s actions that the CJL is a place where these conversations cannot happen. Jewish institutions need to respond to Jews, and Hillels in particular have a special responsibility to their students. While we were preparing the letter, some students told us that they avoided the CJL because they felt their beliefs were unwelcome. We wrote the letter to guarantee that all Jews feel they are welcome and desired members of the Jewish community. Equally troubling, literally dozens of students told us that they wanted to sign but were afraid of potential repercussions. This is evidence enough that we need to change our communal discussion about Israel and Hillel’s Israel policy.

I have spent time living in Israel, and I plan to return. My opposition to the CJL’s response comes from commitment to Israel and a love for the Jewish people. We did not publish this letter to fuel media wars. We hoped the letter would be productive and help create a healthy discussion in our community. I have not been disappointed. Since publishing the letter, I have been reminded of what I most love about the CJL: intellectually rigorous and thoughtful debate among caring friends. I have heard forceful and respectful debate concerning the letter throughout the CJL. Individuals have called and emailed to tell me their thoughts about the letter and ask questions, and the Executive Director of the CJL has reached out to the signatories and is planning individual and group meetings for discussion.

There is even more we can do. I hope the CJL will host open town hall meetings for Jewish students to discuss Israel, bring speakers from across the political spectrum, and create nuanced and diverse study groups about the conflict. As a pluralistic institution full of creative and passionate thinkers, the CJL can lead the discussion on Israel. I hope that the debate around this letter will help our Jewish community rise to the challenge.