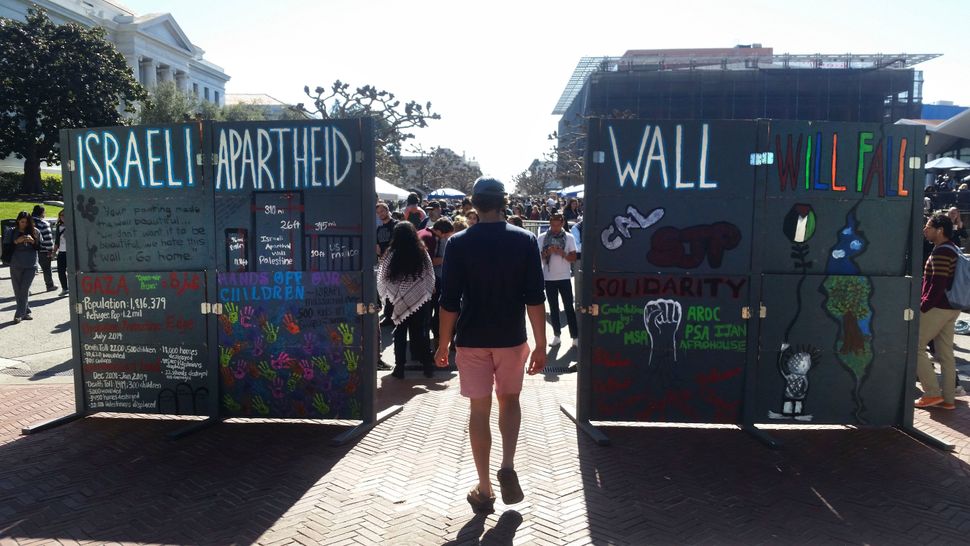 Inescapable: An SJP ‘apartheid wall’ on the University of California’s Berkeley campus hits students directly with its message critical of Israel. Image by David McCleary

In adopting a statement distinguishing anti-Zionism from anti-Semitism, the Regents of the University of California have threaded a tiny needle with minute care.

After intense public debate and lobbying from all sides, the Regents declared on March 24 that anti-Semitism had “no place” on its many campuses, but declined to issue a broad condemnation of anti-Zionism as a form of discrimination. And they stipulated no official sanctions for offensive speech, calling on educators to challenge bias of this or any sort.

By doing so, the sprawling California system set a new standard in combating intolerance while protecting free speech, and in parsing the difference between opposition toward a Jewish state of Israel (anti-Zionism) and bigotry and discrimination against Jews (anti-Semitism). As public universities in cities from Berkeley to Brooklyn increasingly struggle with how to manage the contentious debate over the Israeli-Palestinian conflict, UC’s wise and nuanced approach should serve as an estimable model.

I hope it can last.

I say that because the line between anti-Semitism and anti-Zionism is becoming ever thinner and more porous, and it may disappear altogether, erased by pressures from the left and right, from within and outside the Jewish community, pushed by demographic trends that already connect the fate of diasporic Jews with Israel whether they like it or not.

We shouldn’t be surprised. This evolution was bound to happen because of the enhanced role that Israel plays in modern Jewish identity. There was a time when many mainstream Jews opposed a Jewish state in what was then Palestine. The Orthodox didn’t want mortals to establish what only the Messiah could proclaim. The Reform rejected anything that didn’t conform to their ideal of a universal Judaism. Yiddish-speaking socialists had no interest in pushing for Jewish resettlement in that sliver of ancient land. Even my predecessor Abraham Cahan, founding editor of the Forverts, was wary of the Zionist experiment.

What was acceptable then is no longer accepted now. Most American Jews feel some attachment to Israel, and that attachment has become a central part of Jewish identity: a source of pride and sometimes anguish; a cultural, religious, familial and spiritual bond; a sense of a shared fate, and, in some cases, the only way they feel Jewish.

So it is understandable that any Jew, particularly a susceptible college student, would be offended by an attack on Zionism that felt like an attack on his or her Jewish identity. But the California Regents wisely acknowledged that reasonable people ought to be able to treat Zionism as a political ideology and question whether there should be a sovereign state in which Jews are privileged — especially when the questioning occurs in an academic setting.

How long can this distinction hold?

We already see how easily anti-Zionism can devolve into anti-Semitism — something the Regents acknowledged: “Opposition to Zionism often is expressed in ways that are not simply statements of disagreement over politics and policy, but also assertions of prejudice and intolerance toward Jewish people and culture.” 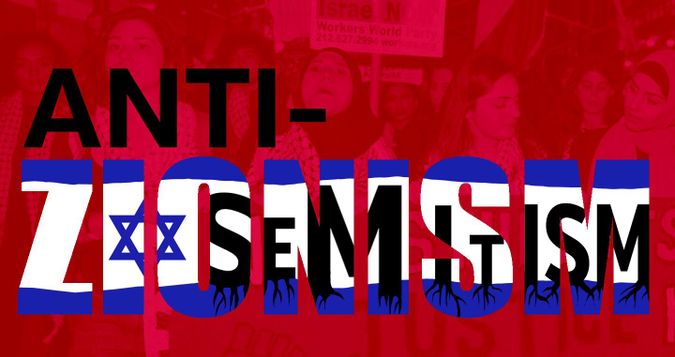 Indeed, this phenomenon of “anti-Semitic forms of anti-Zionism,” as the Regents’ statement puts it, is becoming more prevalent. The movement to urge universities, entertainers and corporations to boycott, divest from and sanction Israel can smack of anti-Semitism when it singles out the Jewish state with the purpose not to reform Israeli behavior but to challenge Israel’s existence altogether.

Or when Jewish organizations are stigmatized unless they disavow their ties to Israel. This happened recently at Brown University, when a group of activists pressured Janet Mock, a popular transgender woman of color, out of speaking at an event sponsored by the campus Hillel because of Hillel’s support for Israel.

As the Israeli writer and activist Uri Avnery has written: “Zionism is a political creed and must be treated like any other…. Yet, again, it is not always easy to draw the line, because real anti-Semites often pretend just to be ‘anti-Zionists.’ They should not be helped by erasing the distinction.”

But the pressure to erase that distinction doesn’t come only from those who want Jewish Israel to disappear. It is compounded by Israeli leaders who conflate Israel with all Jews by positioning themselves as speaking for everyone. Prime Minister Benjamin Netanyahu is often referred to as “the leader of the Jewish people” and sees himself as the Jews’ protector — when, for example, he urged French Jews to make aliyah after the terrorist attacks on their country, or when he urged American Jews to lobby against the nuclear deal with Iran.

“My responsibility is to worry not only about the state of Israel, but also the future of the Jewish people,” he said last year.

Demographic trends strengthen Netanyahu’s case. Israel now has more Jews residing in it than anywhere else does, with nearly 43% of the world’s Jewish population living there, compared with the 40% in the United States. Zionism’s great success has shifted the Jewish center of gravity toward Israel, drawing population and political power, and redrawing identity.

We saw that magnetic pull recently at the Forward. When we asked college students to share an experience that shaped their Jewish identity, we were surprised when all the responses touched on Israel. Nothing about Jewish faith, ritual, tradition, food or humor. These students agreed on little politically, but they were bound in one sense by the common touchstone of Israel.

So I wish the Regents well as they implement the new standards and hope others follow. But I fear that striking a balance between combating intolerance and protecting free speech will grow harder — partly because of our own Zionist success.