4 Things To Remember About Pope Francis’s Visit to Auschwitz 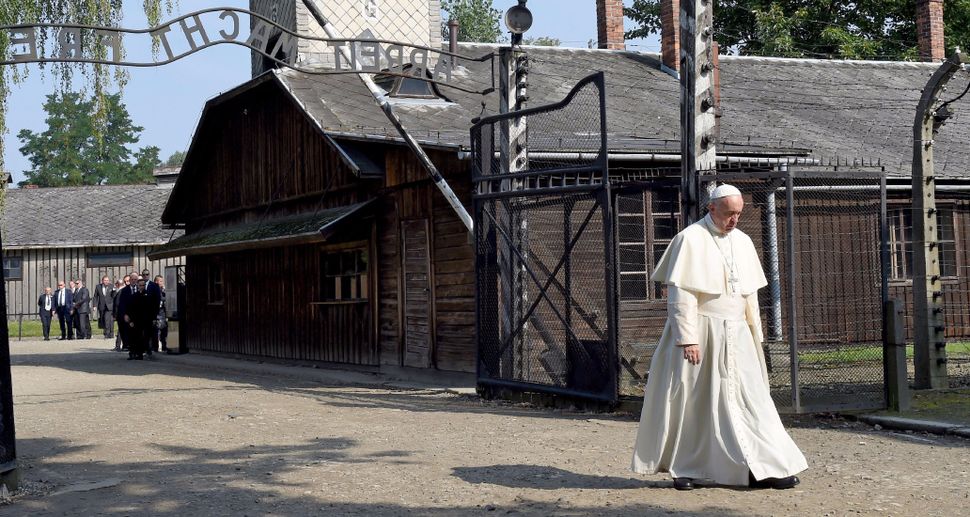 Pope Francis made a visit to Auschwitz-Birkenau Friday. The spiritual leader of the world’s Catholics silently reflected, met with Jewish and Christian survivors of the death camp, and left a note in the guestbook, which read: “Lord, have mercy on your people! Lord, forgiveness for so much cruelty!”

There’s a lot to be said about the Pope visiting Auschwitz-Birkenau, perhaps the most widely recognizable Holocaust site, where 1.1 million people — most of them Jews — were murdered. Here are 4 things to keep in mind.

It should be noted before anything else that the Pope’s visit is, in all, a positive thing. We are quickly approaching an era with no living survivors, and it is important to continually affirm and recognize their stories.

The visit was made in the spirit of humility and empathy, and communicated a desire to understand, relate to, or at the very least pay respect to the dead, the survivors, and the generations of people affected by the things that happened at that site and others like it.

It is especially important that the Pope visits now, as waves of neo-fascism ripple across Europe, particularly when they emerge in heavily Catholic countries like Croatia, Hungary, and, yes, Poland. He is continuing an important legacy, becoming the third Pope to visit the site, and his visit should be considered worthwhile and welcome.

However, the visit is also a pointed reminder of some unfinished business that Jews still have a right to expect from the Pope.

The actions of Pope Pius XII during the Holocaust remain controversial: has been extensively criticised for not speaking out, and for being complicit through silence. Though the Catholic Church adamantly defended its actions for many years, Pope Jean Paul II issued a formal apology in 1998, titled “We Remember: A Reflection on the Shoah.”

The apology fell short of what was hoped for in its continued defence of Pope Pius XII himself, but it did formally apologize on behalf of the Church itself for its failure to take more decisive action during the Holocaust. Pope Francis, who has made a name for himself as a progressive Pope, can and should bring that point home. If the apology is to be meaningful, it should be relevant to mention during a visit to Auschwitz-Birkenau. This visit could serve as an occasion to clarify and state the Church’s position on their actions (or, inactions) during the Holocaust.

It should go without saying that it is wildly inappropriate to have Catholic places of worship at Auschwitz-Birkenau—and yet, there have been not one, but two. In 1984, a group of Carmelite nuns took over a building at Auschwitz which once housed Zyklon B gas with the plan to turn it into a convent. Jewish leaders strongly objected to the establishment of a Catholic place of worship—including the erection of large crosses—on the grounds of a death camp where so many Jews lost their lives, and, in 1987, an agreement was signed by European cardinals and European Jewish leaders banning permanent Catholic places of worship at Auschwitz-Birkenau. It took another six years — in a rush declaration by the Pope intending to diffuse tensions around the 50th Anniversary of the Warsaw Ghetto Uprising — to finally remove the convent.

There is now a large Church erected at Birkenau, in a building that was once Nazi Commandant headquarters. The Church is in direct violation of the 1987 agreement and is a complete backtrack on the progress made when the Convent was closed. Rabbi Avi Weiss, among others, has objected to the presence of a Church at “what is in effect the largest Jewish cemetery in the world.” It stands to reason that if Pope Francis truly wants to solidify his recognition of the Holocaust and the historical gravity of spaces like Auschwitz-Birkenau, he would call for the removal of the Church.

The Vatican has refused to release its archival documents from World War II, despite international calls for disclosure. This is outright suspect at best, since it is speculated that the documents would clarify the actions and intentions of Pope Pius XII. Though previous Popes have been stalwart against opening the archives, it seemed that Pope Francis might be an opening through which the Vatican’s information could finally become accessible. This hope is largely based on a passage from his 2010 book, On Heaven and Earth:

“Opening the archives of the Shoah [Holocaust] seems reasonable. Let them be opened up and let everything be cleared up. Let it be seen if they could have done something [to help], and until what point they could have helped. If they made a mistake in any aspect of this, we would have to say: ‘We have erred.’ We don’t have to be scared of this — the truth has to be the goal.”

If this is truly what Pope Francis believes, and if his dedication to acknowledging history is something he’s willing to act on rather than merely nod toward, his next step should be opening the archives. History belongs to the people, and the history of the Vatican during the Holocaust is no exception.

4 Things To Remember About Pope Francis’s Visit to Auschwitz