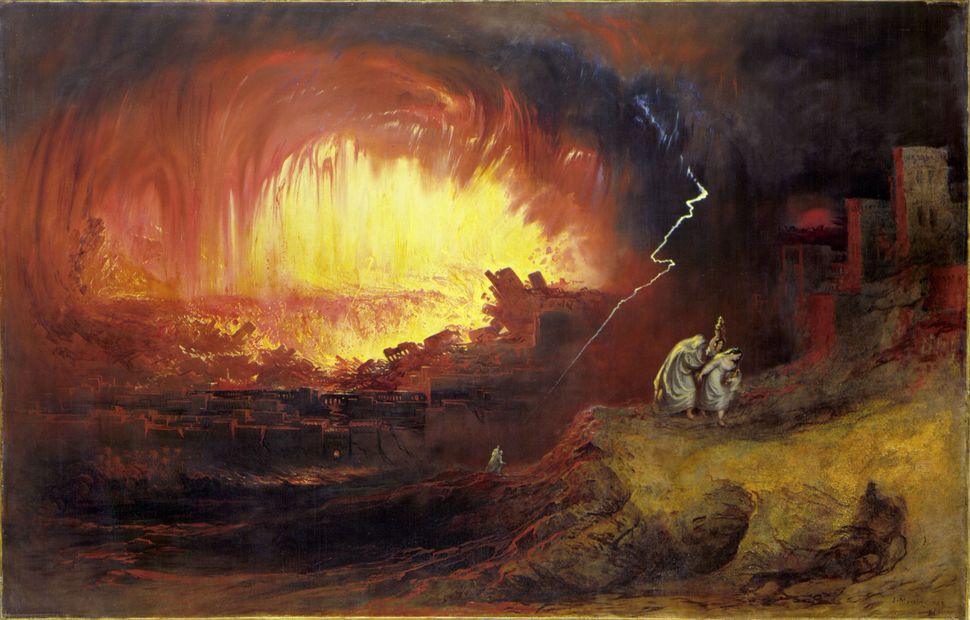 Trump, Pence, Ryan and the whole GOP are Sodomites.

This doesn’t mean that they engage in sodomy, per se. Rather, the Republican leadership today is guilty of sins so grievous that God found necessary to destroy their (im)moral forebears in the Torah.

The actual text of the Sodom story in Genesis 18 and 19 doesn’t give us much information about why that city (along with Gomorrah) is so terrible that God decides to destroy it with fire and brimstone. God describes their sin as great and exceedingly serious. Indeed, the story includes a vignette in which the residents of the town demand that Lot hand over his male guests to the residents “so that they might know them” — presumably in a sexual way. (This, of course, is the origin of the term “sodomy.”) However, a parallel scene in Judges 19 in which a woman is handed over, raped and murdered — and the perpetrators condemned — makes it clear that whatever is going on here, the problem isn’t necessarily loving, consensual sex between men.

Interestingly, the Jewish tradition — including Biblical sources — doesn’t even believe that the sin of Sodom is sexual assault, or poor hospitality. Rather, as the prophet Ezekiel says, “This was the guilt of your sister Sodom: arrogance! She and her daughters had plenty of bread and untroubled tranquility, yet she did not support the poor and needy.” The crime so heinous that God torched the whole city was that of hoarding resources and leaving the economically vulnerable to suffer without assistance.

One doesn’t have to look hard to see how this accusation applies to an administration whose proposed budget cuts meal and nutrition assistance for impoverished children, seniors, and pregnant and nursing mothers and infants. The parallel becomes even starker in light of the over $20 million the government has already spent on Trump’s golf trips and $500,000 per day on Melania’s choice to stay in New York. The White House is not only withholding support for our country’s most vulnerable, but burning through public money for their own “untroubled tranquility” and devising tax cuts to further enhance the tranquility of the very wealthy.

But the parallels don’t end there. The Talmud (Sanhedrin 109a) paints Sodom in even starker terms, suggesting that their selfishness and greed caused them to impose something akin to immigration and travel bans. In one place, the Talmud conjectures that the people of Sodom said to themselves, “Why should we suffer wayfarers, who come to us only to deplete our wealth. Come, let us abolish the practice of traveling in our land….” I’m sure they would have built that “big, beautiful wall” if they could have.

On that same folio in Sanhedrin (109b), the Talmud posits that the Sodomites developed an elaborate ruse to exploit the poor under false pretenses. “If a poor man happened to come there,” it reads, “every resident gave him a denar [coin], upon which he wrote his name, but no bread was given [that is, the store owners recognized such coins and refused to accept them]. When he died, each came and took back his [denar].” Hmmm, an elaborate ruse constructed to give people the sense that they’re being cared for, but in the end, reflects a staggering lack of empathy for their health and well-being? A system designed to enable the wealthy to get rich off the suffering and death of the poor? I can only imagine that the Speaker of the Sodomite House would have been impressed with Paul Ryan’s tenacity and determination to pass a Trumpcare bill that is, against all odds, even worse for Americans than its previous iteration.

The situation in our country right now is exceedingly dire. We are in a state of moral emergency, as some of the worst crimes Judaism could imagine are becoming public policy — and becoming normalized. Many people will likely die as a result of the policies of this administration, and many more will be plunged into a deep, irreversible level of poverty. Hungry people will not be fed. The bread of massive corporations will be hoarded, and only the most symbolic of tokens — ultimately useless, ultimately irredeemable — will be offered to those desperate for sustenance and care. It’s bad, and it’s going to get worse as the months go on.

We have only one option, as I see it. When God informed Abraham of God’s plan to destroy Sodom, Abraham protested, and negotiated with God. They came to an agreement: the city could be spared if a minimal number of righteous people could be found within its gates. Genesis didn’t define what “righteous” meant, but I imagine it was this: People who saw what was happening around them and refused to be silent. People who witnessed the exploitation of others and, even if they themselves were not personally touched by the horrors perpetuated, they refused to be complicit. They refused to be silent. They refused to let the poor and the alien be punished for the greed of those in power. They raised their voice in protest and put themselves at risk for the benefit of others’ sustenance and safety. They resisted evil at every turn and created spaces of protection and nourishment for those in need.
They said no.

Sodom wasn’t saved. There weren’t enough righteous people to carry the city through.

What about here? Are there enough righteous people?