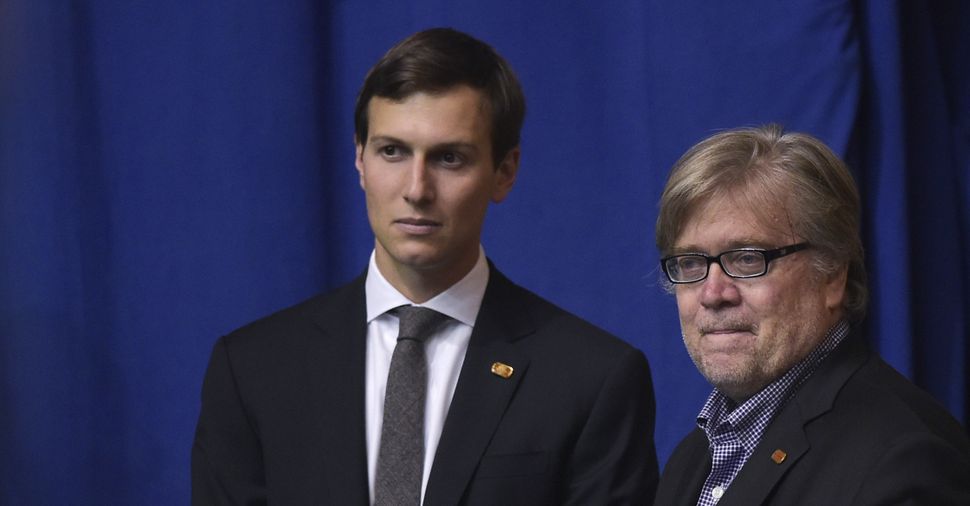 That is not how the press has covered the book, of course. Media coverage has focused mainly on the disparaging ways Donald Trump’s associates describe the president’s mental state. For that spin, blame the publisher’s choice of excerpts for prepublication release, tilted for obvious marketing purposes.

The book itself, however, is essentially a narrative of the infighting between the West Wing’s Bannon and Kushner factions for control of the administration’s agenda. The president is a central character in the feud, but only because the feuding was played out against the backdrop of a leadership vacuum created by a nonfunctioning president who was incapable of focusing on policies, issues or facts for more than a few moments at a time and saw everything through the prism of his own fragile ego.

Most of America figured that out months ago, but we hadn’t previously gotten a detailed play-by-play as told, Wolff says, by the actors themselves. Wolff claims he interviewed more than 200 people for the book, but the main voice in the book is Bannon himself, who apparently gave Wolff extensive on-the-record interview time.

Bannon and Kushner had been allies during the campaign and transition, according to Wolff, but within weeks after the inauguration Bannon began sniping at Kushner and his wife, spreading rumors and undermining their efforts. Bannon saw it as an ideological fight between his anti-establishment nationalism and the couple’s moderate-to-liberal agenda, Wolff writes.

Kushner and Ivanka Trump, however, “felt personally wounded by these backdoor attacks. Kushner, in fact, now believed Bannon would do anything to destroy them. This was personal. After months of defending Bannon against liberal media innuendo, Kushner had concluded that Bannon was an anti-Semite.”

Wolff makes plain that he does not consider Kushner’s view unreasonable. “Bannon could bait Jews — globalist, cosmopolitan, Davoscentric liberal Jews like Kushner,” Wolff writes. At the same time, paradoxically, Bannon “did not hesitate to ding Kushner on Israel” by staking out pro-Israel positions that were further to the right than those of the Orthodox Jewish son-in-law.

For Kushner, the anti-Semitic undertones he saw in Bannon’s maneuvering were “a complicated and frustrating business — and quite hard to communicate to his father-in-law — because one of Bannon’s accusations against Kushner, the administration’s point person on the Middle East, was that he was not nearly tough enough in his defense of Israel.”

Kushner, Wolff writes, found Bannon’s “right-wing defense of Israel” to be “a jujitsu piece of anti-Semitism aimed directly at him. Bannon seemed determined to make Kushner appear weak and inadequate — a cuck, in ‘alt-right’ speak.”

Issues surrounding Jews and Israel were complicated to discuss with Trump in any event. “Jews and Israel were a curious Trump subtext,” Wolff wrote. The president’s late father, Fred Trump, was an “often vocal anti-Semite.” Donald Trump himself was something of a “vulgarian” and a resentful outsider among New York’s heavily Jewish real estate elite. His mentor was the late lawyer and Joseph McCarthy aide Roy Cohn, a “tough-guy Jew,” and Trump “courted other figures he considered tough-guy Jews,” including businessmen Carl Icahn, Ronald Perelman and Sheldon Adelson.

On the other hand, the Trump campaign and White House were “constantly supplying off-note messages about Jews,” including his equivocating on denouncing David Duke and his failure to mention Jews in an official Holocaust Remembrance Day message. And, of course, there was the Charlottesville, Virginia, fiasco, in which Trump insisted on equating Nazis carrying swastika banners with leftists opposing them.

It should be noted that Bannon had a number of Jewish allies at his side, notably Stephen Miller and Sam Nunberg. And the Kushner camp included non-Jewish members, most prominently former Goldman Sachs executive Dina Powell, an Egyptian-born Coptic Christian.

Still, the overtones of Jewish liberalism versus heartland conservatism were thick and open as the two sides battled for the president’s fleeting attention. That’s what Henry Kissinger meant when he described the Trump White House to Wolff as “a war between the Jews and the non-Jews.”