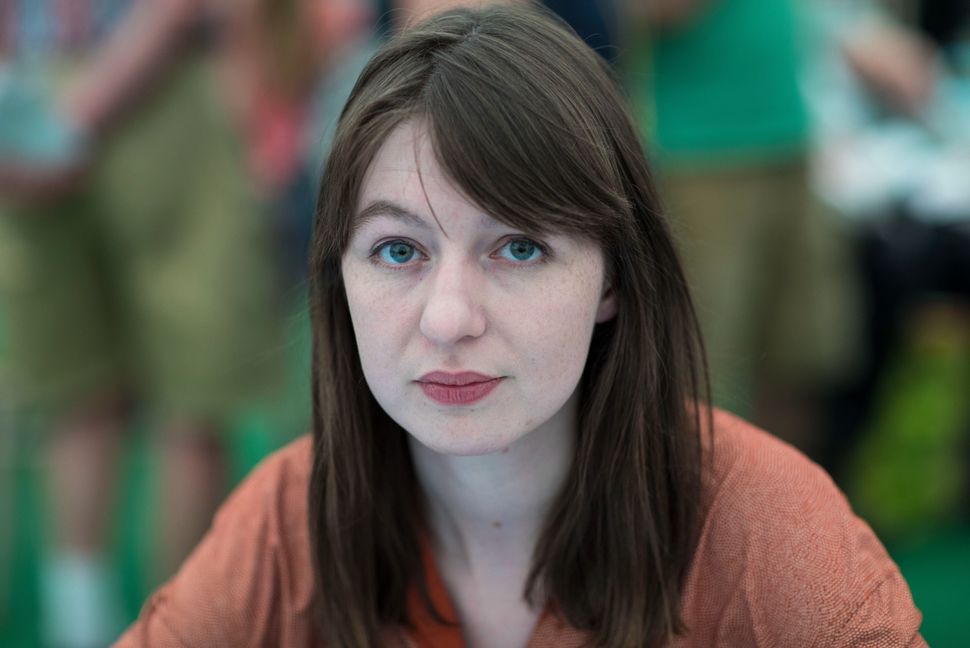 Sally Rooney, novelist, at the Hay Festival on May 28, 2017 in Hay on Wye, United Kingdom By David Levenson/Getty Images

Editor’s note: The headline and body of this opinion piece were updated on Tuesday, Oct. 12, after Sally Rooney released a statement clarifying her stance on translation of her latest novel into Hebrew. She said that she is boycotting Israeli publishing houses, not the Hebrew language — and would allow a Hebrew translation of her novel if she can “find a way to sell these rights that is compliant” with the Boycott, Divestment and Sanctions movement’s “institutional boycott guidelines.”

The young Irish writer Sally Rooney is a literary prodigy. In 2018, she was nominated for the prestigious Man Booker Prize, and the TV series adapted from her first book became a global hit.

In September, at the age of 30, she published her third novel, “Beautiful World, Where Are You,” which has already garnered great interest and acclaim.

However, as her readers in Israel recently discovered, they will not be reading her latest book in Hebrew any time soon.

Although Hebrew translations of her first two books were published by Modan, Rooney has refused to allow her new novel to be translated into Hebrew by the company due to her support for cultural boycotts of Israel.

Her two previous novels, “Conversations with Friends” and “Normal People” have become worldwide bestsellers and have won critical accolades — and are both available in Hebrew. So what’s different about this time?

Haaretz reported that when Modan contacted Rooney’s agent, Tracy Bohan of the Wylie Agency, about another translation deal, Bohan shared that Rooney supports a cultural boycott of Israel and would not allow a Hebrew language translation of her latest novel to go forward with Modan.

Rooney’s decision surprised and saddened me. I am a Jewish and Israeli woman, but I am also a literary scholar who believes in the universal power of art.

Rooney has chosen a path that is anathema to the artistic essence of literature, which can serve as a portal for understanding different cultures, visiting new worlds and connecting to our own humanity. The very essence of literature, its power to bring a sense of coherence and order to the world, is negated by Rooney’s choice to exclude a group of readers because of their national identity.

It goes without saying that Rooney has the right to express her views and criticize others — individuals, groups, peoples or nations. It can also be argued that, beyond this right, she has a duty to act in accordance with her conscience. But a boycott, especially a cultural one, is among the most slippery of slopes. The deployment of boycotts has in the past led to human atrocities that any loving soul would distance itself from. It is not always remembered, but among the first steps taken by the Nazi regime in Germany was the initiation of a boycott of Jewish businesses.

I’m not suggesting that Rooney is antisemitic, or that criticism of Israel automatically constitutes antisemitism. But given the rise of antisemitism in recent years, especially in Europe, the timing of her choice is dangerous.

Gitit Levy-Paz, PhD, is a Fellow at the Jewish People Policy Institute.