Menu
Home‘Is, Was, Will Be’

The name of God in the Jewish tradition is comprised of four Hebrew letters: yud, hey, vav hey. Unpronounceable, this grouping of letters amounts to the impossible conjugation of the verb “to be” and, if it could be translated at all, it might be read as “is, was, will be.” This name contains the promise and challenge of Judaism: to engage the past in a way that welcomes the full reality of the present so that the future may be beautiful beyond our wildest imagination. Tradition gifts us many tools to navigate this path. One of the most powerful is creative reinterpretation — chidush. Chidush, from the Hebrew root chadash, meaning “new,” refers to an original insight on a passage of Jewish text.

The value of chidush as a tool for mediating between past and present appears throughout our sacred texts. The Talmud (Avot de Rabbi Natan) records a conversation between the sage Rabban Yochanan ben Zakkai (30 BCE - 90 CE) and his student Rabbi Eliezer ben Hurcanus (40 BCE - 20 CE), in which R. Yochanan urges R. Eliezer to speak his own unique words of Torah. R. Eliezer resists. Comparing himself to a cistern, he defines his role as one who receives the teachings poured into him as they are given, without adding to or changing them. R. Eliezer sees himself as a vessel for the past. R. Yochanan disagrees. Rather than being a cistern, R. Yochanan urges his students, be a wellspring. In R. Yochanan’s view, we are meant to be a channel for the headwaters, the bountiful source from which new teachings, new chidushim, continually pour forth.

To be a student of Torah, then, is to find and add one’s own unique voice to tradition. This act of creative reinterpretation is thought to be so essential that, in another talmudic passage, the great sage Rabbi Yehoshua (a disciple of R. Yochanan ben Zakkai and a colleague of R. Eliezer) declares that there is no beit midrash without chidush. (Chagigah 3a) It can’t exist.Our sage seems to be saying that learning and creativity are inseparable. The beit midrash is, fundamentally, a living laboratory in which the past gets read through the unique lens of human beings in the present, yielding new interpretive possibilities. And it is these new understandings that will shape the future.

Perhaps R. Eliezer and R. Yochanan were both correct. Chidush requires us to be at once both cisterns and springs: opening ourselves wide to hold what has come before us while allowing elements to mix and bubble to the surface in new and unexpected ways. The story of scholar and student concludes with R. Yochanan leaving the room to allow R. Eliezer the freedom to interpret his teachings. Having received the permission and space to innovate, R. Eliezer “sat and expounded on Torah, his face shining like the light of the sun.” His countenance shone so bright that those present could not tell if it was day or night. (Yalkut Shimoni, Yitro 268)

When R. Eliezer brought his full self to his ancient inherited tradition, something magnificent happened: He came alive. The light within him got activated and new chidushim flowed forth. His creative interpretation was so powerful that the world around him was seen anew.

Chidush is how we make the divine more manifest in our world. It is the holy responsibility and sacred joy bequeathed to each and every one of us. Torah teaches us that we are created b’tzelem Elohim, in the image of God, the ultimate creative source. Each of us is a unique vessel for the teachings and traditions of the past and, simultaneously, a channel of creative interpretive flow. In this way, we partner with God to bring forth insights most needed in the present era. Chidush is a sacred practice that has been bequeathed to us by the generations that came before us, and each of us is a link in this chain moving forward. This primal form of connection is one of our more significant pathways to the divine. Through it, we honor what was, connect to what is, and bring into being what will be. 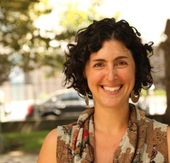 Rabbi Adina Allen is a spiritual leader, writer, and educator who believes in the power of creativity to revitalize our lives and transform Jewish tradition. As co-founder & creative director of Jewish Studio Project (JSP), she has pioneered a methodology for integrating Jewish learning, spiritual reflection, and creative expression that she has brought to thousands of Jewish educators, professionals, and lay leaders across the country. Adina is a recipient of the Covenant Foundation’s 2018 Pomegranate Prize for rising educators. She was ordained at the pluralistic Rabbinical School of Hebrew College in 2014, where she was a Wexner Graduate Fellow.