Two-hundred years ago, the Hasidic master Rebbe Nachman of Breslov said: “There is no despair at all.”

We are caught in a toxic repetition of violence and inhumanity. Even after the Holocaust, genocides continue. Even after previous unfathomable school shootings, our nation has not figured out how to keep our children safe. No despair?

We are trained to think of hope and despair as opposite emotions. But when we apply the sensibility of elu v’elu — “these and those are the words of God” — a new understanding emerges. Perhaps the despair that Rebbe Nachman refers to is not a feeling at all. Perhaps it’s an action, a choice. The word he uses for despair, yeush, is a talmudic term that refers to giving up hope of finding a lost object. When an owner gives up hope, he gives up ownership of the object: his despair actually changes the status of the object. Yeush is the choice to let go, to give up, to discard our aspirations for the future.

My teacher Elie Wiesel taught that hope is also a choice. He told us we must not give despair the victory. To illustrate his point about hope — to explain its relationship to resistance — he shared a story of a woman named Roza Robota, an inmate in Auschwitz-Birkenau, who smuggled grains of dynamite under her fingernails for weeks in order to collect enough to bomb the crematoria. She and four of her comrades were captured after the Sonderkommando Revolt in October 1944, and, while being taken to be executed, they shouted the biblical phrase chazak v’amatz! (be strong and of good courage!). The lesson Wiesel wanted us to learn was: “There were many instances of resistance. And there is no resistance without hope.”

When Rebbe Nachman says there is no despair, he is pointing to the choice to give up, to cease resisting, rather than the human feelings of despondency that he himself often felt. Despair-as-choice, to which Rebbe Nachman refers, forecloses hope and makes action impossible. But once we establish that we will never give up, we can experience the emotions of hope and despair in the very same moment. Though it may sometimes drive us to distraction, feeling the weight of the darkness will never threaten our commitment to act. Allow your heart to break, yes. But then allow it to fuel your resistance.

I don’t want to look away from those beseeching faces. I don’t want to abdicate, to surrender to evil. The world gives us many reasons for despondency, and the world breaks our hearts. Hope without heartbreak can be naive. Heartbreak without hope leads to inaction, apathy. Elu v’elu. We need them both. Honoring our heartbreak, our grief, and our frustration is healthy and necessary. But it is hope that keeps us from yeush; it is hope that makes resistance, and therefore change, possible. 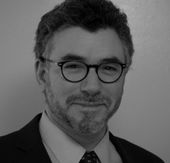 Rabbi Ariel Burger is an author, teacher, and artist. His forthcoming book, Witness: Lessonsfrom Elie Wiesel’s Classroom, is now available for pre-order on Amazon. A Covenant grantee, he is developing integrated arts and Jewish learning content for adult learners and educators. You can visit Ariel’s virtual gallery at arielburger.com.