We are inheritors of a tradition rooted in two interconnected questions, posed by God, in the Bible. The first, “Ayyeka?” (Where are you?), is presented to Adam and Eve after they eat the forbidden fruit, notice they’re naked, and hide. The second, “Ay ahikha?” (Where is your brother?), appears in the story of Cain and Abel after envy and competition for God’s love leads to the Torah’s first murder.

I read these, respectively, as the questions of particularism and universalism. Our capacity to answer the first with a sense of self-confidence and rootedness in our identity is a prerequisite for responding to the second: I cannot be my brother’s keeper in any authentic or sustainable way without knowing who and where I am and what it is that I especially keep — the particularly Jewish observances I practice. Particularism is the best guarantor we have for a healthy universalism; yet, for Jews today, it’s dangerously thin.

While I was delighted that a 2013 Pew Research Center survey found 94 percent of Jews reporting pride in being Jewish, unpacking that pride proved surprisingly complicated. It was great to see that “leading an ethical life” and “working for justice” ranked as the second and third most essential Jewish values, but these are universalist values; Jews don’t have a monopoly on ethics and justice. I was troubled to find that the only highly ranked particularist value — the highest ranked value of all, in fact, at 73 percent — was “remembering the Holocaust.” The numbers imply that for Jews today, more important than how we live (particularly) as Jews is how we were killed (particularly) for being Jews.

American Jewish identity is currently dominated by two values: tikkun olam, repair of the world, reflecting commitments to ethics and justice, and Zionism — which, viewed as the ultimate response to and safeguard against antisemitism, embodies remembering the Holocaust. But here’s the rub: Today’s Jews are finding these two values — the only two of substance, so many of them have been taught — in conflict with one another.

The most contentious way the universalism vs. particularism debate plays out on campus today is related to coalition building and the understanding that all struggles against oppression and movements for liberation are bound up together. Jewish students are presented with false binaries and forced to choose between particular concerns and allegiances (say, support for Zionism — defined as a belief in the importance of a Jewish and democratic state — “vs.” ending the occupation), or values (such as Jewish survival or Palestinian liberation). These reductive, zero-sum choices end up dictating if/how students show up and/or are permitted to show up in solidarity around other issues. Students are, in some cases, determining and, in other cases, being told that their particularities related to Israel or Zionism prevent them from working toward justice or in service to other universalist values they hold.

Millennial Jews are at a loss regarding how to respond because they haven’t been given space to live between these binaries. They’ve been pushed to perform their Judaism without adequate opportunity to explore and experience it in all its wonder, messiness, and glorious particularity. The depiction of Judaism as animated by either suffering or social justice results in a specious choice between reaching in and reaching out that is damaging to both Jews and Judaism.

A history of persecution is producing a caricature of ourselves in which our survivalist and nationalist muscles are pumping and flexing while the rest of our body atrophies. This distortion is unfortunate, because the full corpus of Jewish wisdom and practice is exceptionally compelling.

Being different isn’t actually a tough sell to students today. Distinctiveness is viewed positively on campuses with strong cultures — even dogmatisms — of liberalism and individualism. It is the manifestation of particularism as something privileged, chauvinist, or oppressive that results in a bad rap for religion. Owing to factors such as overwhelming American Jewish socioeconomic success, a decline in seemingly all particularist values other than Zionism, combined with an increasingly hawkish Israeli government, and also — confusingly — the very real persistence of antisemitism itself, Judaism as a whole is becoming alternatingly incomprehensible and/or unpalatable within many activist circles. To many young Jews in America today, claiming mantels of discrimination or difference feels disingenuous, and Holocaust education and talk of antisemitism often feel manipulatively designed to stifle criticism of Israel and to bolster Zionist (though not holistically Jewish) identity.

If our particularism is reliant upon either “remembering the Holocaust” or contemporary Zionism, we’re sunk. But while a narrative that starts with Auschwitz and ends with Israel will not produce a healthy or sustainable Judaism or Zionism, the story of Egypt to Sinai — oppression to revelation — can. The latter disrupts the binary by emphasizing particularity while forever ingraining in us the universalist value of loving and caring for the stranger. Redemption isn’t about remembering Egypt or even about arriving in the land. We are commanded to remember leaving Egypt and to perennially recommit ourselves to Sinai — to a covenant characterized by particularist, universalist, ritual, and ethical commands.

“Let my people go so that they may serve Me,” says God. We are liberated for a purpose: that we might experience revelation and thereby live lives capable of redeeming ourselves and others. Liberation demands that we fearlessly and fully answer the question of “Ayyeka?” by nourishing a positive, robust, varied particularism that inspires the next generation to choose not merely to survive, but also to thrive — with both humility and pride — as Jews. 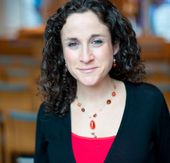 Rabbi Michelle Dardashti serves as the associate university chaplain for the Jewish community at Brown University and as rabbi of the Brown Rhode Island School of Design Hillel. She formerly served at Temple Beth El in Stamford, Conn., and as the Marshall T. Meyer Rabbinic Fellow at B’nai Jeshurun in Manhattan.