Havdil: the making of distinctions. I’ve been thinking about this subject for as long as I’ve been a feminist, which is to say, for half a century. The fundamental insight of feminism is that, in the patriarchal world we inhabit, there is an ever-present, underlying dualistic hierarchy that privileges male above female, and this primary distinction generates much of the world’s oppression and injustice.

When, 35 years ago, I began creating new Hebrew prayer from a feminist perspective, the very first blessings I wrote were for Havdalah, the closing ritual of the Sabbath, which distinguishes the Sabbath from the rest of the week. It struck me then that of all the liturgical subjects in need of re-conceptualizing — and, hence, re-imaging — none was more important than how we make distinctions. Havdalah is not just a performative ritual separating two realms of time; it is a symbol of all Jewish theological distinctions. And, as we know, theological distinctions such as this one have fundamental moral meaning and material influence when analogized to the world of human relations.

The blessing for distinctions in the traditional Havdalah offers this list of parallel pairs: holiness/secularity (the mundane); light/darkness; Israel/the (other) nations; the seventh day (Sabbath)/the six days of creation. Demarcated by ritual, the separation between Sabbath and weekday thus relies on a hierarchy implicit in the pairs holiness/secularity and light/darkness. By dint of its inclusion in this list of binaries, the distinction between Israel and the other nations is also hierarchized — and here is where the problem becomes acute and its implications become crucial. Clearly, we must distinguish between self and other in order to live in the world and engage in ordinary life. But when the distinction between self and other, whether individual or communal, is viewed as hierarchical, we cease striving for a world of authentic, Buberian I-Thou relationships and valorize instead a polarized world of Us/Them — a stance all too familiar in the public domain today.

My re-creation of the blessing for distinctions challenges the fundamental Jewish hierarchies of Havdalah, initially by suggesting that holiness may be sought everywhere, in everyday life. The deeper intention of the blessing is to enjoin us to seek relationships of reciprocity and integrity and to see holiness in the face of the other.

Let us distinguish parts within the whole
and bless their differences.

Like the Sabbath and the six days of creation,
may our lives be made whole through relation.

As rest makes the Sabbath precious,
may our work give meaning to the week.

Let us separate the Sabbath
from other days of the week,

seeking holiness in each.

My thoughts about distinction have not changed in the decades that have passed since I wrote this blessing. In the disastrous political climate we inhabit today, we need more than ever to think about the distinctions we make between self and other — and to seek every opportunity to build our capacity for just, peaceful, and harmonious relationships. 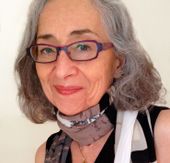 Marcia Falk is a poet and translator whose most recent book is The Days Between: Blessings, Poems, and Directions of the Heart for the Jewish High Holiday Season. The Book of Blessings, her re-creation of Hebrew and English prayer from a nonhierarchical perspective, is forthcoming as a 20th-anniversary edition from CCAR Press. She is also a painter. See marciafalk.com.