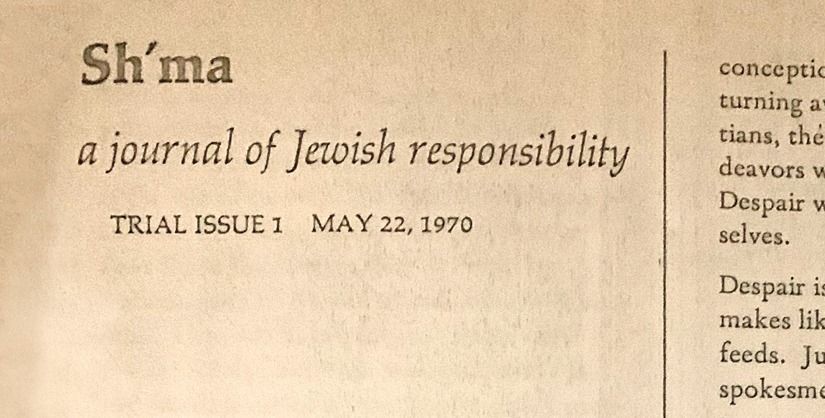 A Hebrew adage asserts, “Kol hat’chalot kashot,” “All beginnings are difficult.” So are endings. In the case of Sh’ma, it has been 50 years since my teacher Rabbi Eugene Borowitz inaugurated this journal of Jewish ideas and responsibility as a vehicle for Jewish communal discussion, debate, and dialogue, and my feelings are mixed ones of sadness and gratitude as I both lament the journal’s impending closure and am grateful for its many years of existence. This, the final issue of Sh’ma, marks the end of a vital chapter in American-Jewish history.

Of course, I would be disingenuous if I did not acknowledge that my feelings are intensified in view of my own retirement this year after a career of service to the Jewish people and the academy of scholars — as well as my deep and abiding personal relationship with Dr. Borowitz. I have a vivid memory of Rabbi Borowitz in 1973 discussing Sh’ma’s founding three years earlier. He told our class that many of the great Jewish teachers of the 19th century served as inspiration for Sh’ma. These men — Zacharias Frankel, Isaac Mayer Wise, Isaac Leeser — had created periodicals to disseminate their own views and to foster Jewish communal discourse in that time and place. He was convinced that contemporary America was in equal need of such instruments, and he decided to launch Sh’ma.

While inspired by these men, he did not slavishly imitate them. Indeed, he said he was determined to depart from their paradigm in one extremely crucial respect. These men all used their journals and magazines to promote their own views on concerns of the day and to polemicize against those whose positions they opposed. In contrast, Borowitz was determined to forge a different prototype for Sh’ma. He felt that Sh’ma should adopt a principled commitment to pluralism and always be open to diverse views on every topic — as long as these views were expressed in intelligent and respectful tones.

Borowitz invited a wide array of activists and academics to bring their full intellectual curiosity to the topics they addressed, cultivating a range of viewpoints that voiced sharp and pointed disagreements. Borowitz was determined that Sh’ma embody a stance deeply rooted in the traditional Jewish notion of machloket l’shem shamayim, principled argument for the sake of heaven. He believed that arguments and discussions were ongoing and that there was seldom a final word. So, as he told our class and years later wrote about in his introduction to a book on rabbinic theology, he altered and amended a statement often appearing at the completion of a medieval Jewish manuscript, “Tam v’nishlam” — “Over and done.” He added the word “lo,” or “not,” before Nishlam, transforming the adage to mean that while the expression of a debate might be “over,” it was not, if ever, “done.”

The integrity, variety, and intellectual humility that characterized Sh’ma for the past five decades never failed to affirm this approach. Sh’ma — and, since 2016, Sh’ma Now —never abandoned this overarching commitment as it evolved through several iterations over the years. Such sensibility may well be the single most important legacy Sh’ma has bequeathed to our community. It is one that we in the Jewish community should continue to promote at a time when respect among disputants is all too frequently lacking; when persons too often simply condemn one another and attempt to seal themselves off from those with whom they quarrel. As it comes to its completion, Sh’ma will unquestionably be missed by so many of us. However, Sh’ma will always remain part of netzach Yisrael (the eternality of the Jewish people): its model of passionate and engaged, yet civil, informed, and ongoing discourse provides an ever relevant and necessary model of enduring significance to our Jewish world. I am deeply grateful that — despite the closure of Sh’ma — its 50-year-archive will remain secure and available to scholars, rabbis, and Jewish seekers now and into the future.

As Sh’ma publishes its final edition, a rabbinic lesson I once heard from a bat mitzvah girl about the moment of matan Torah — the giving of Torah at Sinai — captures the admixture of emotions I have that mark this moment of transition. She pointed out that God first addresses Israel in Exodus 20:1 with the silent Hebrew letter “aleph” in the Hebrew word “Anochi” — “I am.” Such silence, she said, is frightening. There is a void. How it will be filled is unseen. Yet, the gift of revelation is linked to that silence. Silence prepares Israel to listen to God and opens them to unexplored paths. May the path Sh’ma blazed for our community during these past five decades of its existence continue to inspire creativity in the days and years ahead and nurture the type of dialogue it fostered for so long. 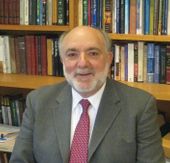 David Ellenson is chancellor emeritus and former president of Hebrew Union College-Jewish Institute of Religion as well as former director of the Schusterman Center for Israel Studies and professor emeritus of Near Eastern and Judaic Studies at Brandeis University.