In chapter 31 of the book of Genesis, after Jacob flees Laban’s house and Laban pursues him, they have one final confrontation. Laban was the father-in-law who had fooled Jacob by swapping daughters (Leah and Rachel), much as Jacob had fooled his own father by swapping sons. But in that last encounter, trickery fell away, and Jacob faced Laban full-on.

In the heat of their exchange, Jacob introduced a new name for God: Pachad Yitzchak, Fear of Isaac. “Had not the God of my father, Elohei Avraham and Pachad Yitzchak, been with me, you would have sent me away empty-handed.” (Genesis 31:42)

“Pachad” is an unusual word to associate with God. More common to describe the fear of God is “yirah,” also translated as “awe” or “reverence.” The Hebrew name for the High Holidays — Yamim Noraim, or Days of Awe — comes from the word “yirah.” Though “pachad” and “yirah” are sometimes synonymous in ancient literature, a full survey suggests distinct connotations. Fear-tinged awe that opens the soul is likely to be described as “yirah.” Oppressive fear that shuts one down is likely to be described as “pachad.”

God has many names in Judaism. Pachad Yitzchak is one of the most ominous and enigmatic. The name appears nowhere else in the Bible, and yet Jacob uses it twice in his final encounter with Laban. Is he stressing Isaac’s fear of God, or that God’s fearsomeness is on Isaac’s side?

Abraham Ibn Ezra (a twelfth-century Spanish commentator) embraced the former reading. He saw Pachad Yitzchak as a veiled reference to the Akedah, Abraham’s attempted sacrifice of Isaac — a story we read on Rosh Hashanah. Retelling this story of terror invokes the memory of past virtue to fortify us as we face our failings.

Nachmanides (a thirteenth-century Spanish commentator) disagreed with Ibn Ezra. He understood the name Pachad Yitzchak to refer to God’s expression of judgment, midat ha’din. Nachmanides’ interpretation also offers a High Holiday connection: Rosh Hashanah is called Yom HaDin, the Day of (God’s) Judgment. Here, the threat of judgment is against Laban, wielded by the fearsome God of Isaac.

Nachmanides was a kabbalist who understood that each patriarch channeled a different facet of God. Abraham expresses chesed, or kindness. According to Kabbalah, the counterbalance to chesed is either din, judgment, or gevurah, heroism, traits that limit chesed’s flow. Isaac is associated with gevurah. The balance of chesed and gevurah is emet, divine truth. Emet is Jacob’s trait.

These associations once puzzled me. The man who attempted to slaughter his son embodies kindness? The son who was bound on the altar represents heroism? And Jacob, with all his deceptions, is truth? I understood them better after a conversation with the biblical scholar Avivah Zornberg, who explained that these are the traits that each of the patriarchs grappled with the most, their successes as stunning as their failures.

Perhaps when Isaac was young, Pachad Yitzchak was his terror. Then he held out his hands for his father to bind. He lay on the stone table and looked straight at his father, his God, and his fears. Facing the limits of kindness, he came to embody strength, justice, and firm judgment. Perhaps Jacob was changed when he faced Laban, who had fooled him, and then Esau, whom he had fooled. Perhaps Abraham was changed when he faced the body of Sarah, who died when she learned that he had shown too much obedience to God.

This year on Yom HaDin, during these Days of Awe, may we face the traits we grapple with most, and be changed by the encounter. 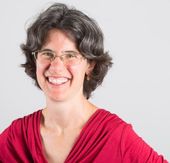