“Who shall live and who shall die,” a line in the prayer Unetanneh Tokef, is the emotional highpoint of the Rosh Hashanah and Yom Kippur liturgy. The power of it is that, despite antibiotics and micro-surgery, we really don’t know who will live and who will die; not in the coming year and not in the coming day. Those of us who were in New York City on Rosh Hashanah in 2001, five days after 9/11, remember the power of reciting this haunting, awful, and awe-filled prayer. The shul community was in full attention; people wept — some silently, others audibly.

Close to 3,000 people were murdered by terrorists in the attacks on 9/11. Since then, terrorists have killed another 403 people in the United States. In that same period, deaths by handguns amounted to 406,496.

Overall, roughly 33,000 people are murdered every year in the United States. Slightly more — roughly 35,000 — die in traffic fatalities. In Israel, more people have died in traffic accidents since the establishment of the State of Israel than in all the wars and incidents of terrorism combined. Even more shocking are the number of deaths from respiratory diseases.

In the United States, several trillion dollars have been devoted to the war on terrorism since 9/11; quantitatively less has been spent to address avoidable deaths. Fear drives the enormous sums we spend on defense. And yet, we rarely consider the additional human costs, above and beyond the financial costs of imposed security measures.

Two interconnected stories: On October 10, 1982, on Shemini Atzeret, outside the Great Synagogue of Rome, two smartly dressed men arrived. When asked by the shul’s security guards to identify themselves, they lobbed several grenades into the shul and sprayed the crowd with bullets. The target of the attack was the shul my sister often attended while living in Rome that year as an au pair for an Orthodox family.

And here is a postscript. Soon after the attack, the 10-year-old boy in her charge, Gadi, a talented violinist, started a new music class. It was nearby and he walked home by himself. But one day, she picked him up, and when she entered the school and asked for Gadi, she was told that there was no Gadi in the class. When my sister described him, the teacher replied: “Oh, you mean Giovanni.” And my sister realized that Gadi, 10 years old, had figured out that (a) Gadi was a Jewish name; (b) to have a Jewish name potentially made him a target; and thus (c) he’d be safer using an Italian name.

What I learned: First, in assessing risk and responding to it, let us acknowledge some sense of proportion. While we guard against terrorism and fight terrorists and terrorist ideologies, the resources we deploy should be proportionate to the threats and human costs. If, as a society over the past fifteen years, we had deployed a proportion of the resources devoted to the “war on terror” to a “war on sugar” or a “war on guns,” fewer people would needlessly have died, and projected death rates would continue to fall for another two generations.

And, second, it is now more than 80 years since Franklin D. Roosevelt famously told Americans, “The only thing we have to fear is fear itself.” Though a cliché, these words are so true today. We need to be more resolute and less fearful. In the 1930s, Americans faced enormous challenges — the Depression, Nazis, and the assault on Pearl Harbor — with resolve. Today, we need a clear sense of hope and vision — the antidotes to the fear that incapacitates us. It’s not about having no fear at all, but rather about how we operate within the fear and move forward. Since last Rosh Hashanah, we have seen the inauguration of perhaps the most unique presidential administration in the history of this republic. For many people, it has ratcheted up their — our — sense of fear to wholly new levels. And so, we must remain steadfast. We must not give in to our fears, and we must not act based on our fears. Rather, we must hold fast to hope and to vision — this year, more than ever before. Vision and hope are what we should be considering as we enter these holy days. And this might be our meditation as we chant the words of the Unetanneh Tokef. 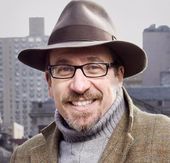 Nigel Savage is the CEO of Hazon, Hebrew for “vision,” which he founded in 2000. Hazon works to create a more sustainable Jewish community and a healthier world for all. He can be reached at Nigel@hazon.org.