Seeing God “face-to-face” promises intimacy but signals a complicated relationship. The Torah testifies that Moses “was known by God ‘face-to-face.’” (Deuteronomy 34:10) The medieval commentator Rashi explains that Moses was so intimate with God that he was able to call upon God whenever he wished. Nachmanides, the medieval scholar known as Ramban, understood their closeness to be so strong they needed no intermediary. And yet, despite the immediacy of one face to the other, the Torah restrains ultimate closeness. To Moses’ request, “Show me now Your glory,” (Exodus 33:18), God replies: “You are not able to see My face, for no person can see Me and live.” (Exodus 33:20) Even the sun in eclipse, already covered and obscured by another object, requires levels of filters to be observed. Seeing God face-to-face is suicidal.

More than that, it is absurd. Humans are made in the image of God: We think and accumulate knowledge. But God’s knowledge is one and the same as God’s existence. Moses could not see God’s face, for “to see God” would be to understand God. We are incapable of such action. If we would “see” God, we would “see” that which we cannot grasp. Our limited selves cannot presume to assimilate Ein Sof — that which has no limit. And Judaism did not take the option of positing a lesser or human god who could be seen and understood. For us, that would be a denial of God’s Being, infinite at every moment.

Seeing God is an impossible task for humans; surprisingly, it is also impossible for God. Exodus 33:20 should be read: “You are not able to see My face, for a person cannot see Me that I shall live!” God cannot survive our gaze. The “I” is also self-referential, referring to God. If an individual could escape the inherent danger of seeing the Infinite, then — by definition — he or she would construct an image of God that would be profound only in part; it would be a limited, strangulated God. God would be reduced to something finite that a person can comprehend, an icon that might be venerated for its powerful but limited nature. Such seeing, however, is actually a funerial viewing of a dying God, a permanently fixed position of perfection.

But for those of us who worship the “ever living and changing God” (Ehiyeh AsherEhiyeh), such a deathly nostalgia is repugnant. A perfect, unchanging God, the unmoved mover, is just too static for us today and for the conceivable future. The ever-increasing holiness (kadosh, kadosh,kadosh, of the Kedusha, or Holiness prayer) of God in a kabbalistic model makes sense and produces awe for our mega-computer epoch that sees knowledge and understanding — theologically, key elements of the divine — as unimaginable exponential growth and not as mere accumulated data or static cognition.

The utter vitality of God does allow us to see God. We are given a glance sparked by God’s deep penetration of every dimension, nuance, arch, and crevice of the world. Although we do sense God’s presence hiding just behind nature, this is not God’s face but rather the cold transcendent ground of our immanent reality, absent relationship and personality.

Given God’s vitality, where and how does our face meet God’s? Moses almost succeeded. He glimpsed the knot of God’s phylacteries (tefillin) on the back of God’s “head,” which contain verses parallel to those found in our tefillin. (Brachot 6) Thus, the people Israel in their morning wrapping of tefillin bind themselves to God, who simultaneously is wearing his tefillin and binding Himself to Israel. Our own glimpse of God occurs through prayer. God’s reality is summoned at the beginning of every blessing when we recite, “Blessed are You, God…” (“Baruch atah…”). We assert God’s presence and God shows up, tied to us by the image of the tefillin knot.

We might also glimpse God’s face in the beit midrash study hall, where students push back against their mentor’s lesson. Learning is all about internalizing, formulating, questioning, and reformulating — an endless dialectic. In that wrestling with our ultimate learning partner, God’s face is momentarily revealed and glimpsed, shining between the black print and the bright white page, hovering with the argument.

Finally, God’s face is seen where it has been shunned and avoided. Do you really wish to see God face-to-face? There is one sure way: when one gives tzedakah, one must (as the midrash on Psalm 17 commands) look at the face of that poor woman or man. That face bears the image of God, and one fulfills the verse, “I through TZeDeK / charity shall see Thy face.” (17:15) When we are able to give that empathic gaze, we hope that the Merciful One will look that way towards us. 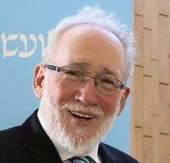 Rabbi Daniel Landes is founder and director of Yashrut, building civil discourse through a theology of integrity, justice, and tolerance. Yashrut includes a smikha initiative as well as programs for rabbinic leaders.