There may be two sides to every story, but, when I escort American rabbis and rabbinical students on visits to Hebron in the occupied Palestinian territories through my work at T’ruah: The Rabbinic Call for Human Rights, we only bear witness to one side of the story: that of the oppressed.

We meet panim el panim with Palestinians like Issa Amro, a resident of Hebron and member of the nonviolent group Youth Against Settlements. Issa describes being imprisoned under “administrative detention” by the Israeli army for months without criminal charges, yet Israeli settlers harass and attack Palestinians like him without the military doing anything to stop it. He shares his anger and shame that Palestinians are forbidden to drive and walk on certain public roads, referred to by the Israeli military as “sterilized.” These roads once made up Hebron’s bustling city center.

We meet panim el panim with former Israeli soldiers like Merphie Bubis, a member of Breaking the Silence. Merphie shows us Palestinian homes and stores that have been painted with racist graffiti and also welded shut by the military. She discusses orders she carried out against Palestinians, including random checkpoints and nighttime home raids to “make the army’s presence felt” and protect the Israeli settlers.

These conversations are often jarring and uncomfortable, especially at first. Most American Jews have never sat with a Palestinian activist like Issa or been challenged by the perspectives of anti-occupation veterans like Merphie. But our hosts are unassuming in the way they share their personal stories, and participants soon connect with them, finding the courage to look them in the eyes and ask probing questions such as: “What would you say to an Israeli soldier about to begin military service?” and “How do you explain all of this to your children?” and “What gives you hope?” Experiences like these allow American rabbis and rabbinical students to access first-hand stories they have not heard before and then to use their rabbinic voices in new ways to talk about the occupation.

By the end of the day, participants sometimes ask why we do not meet panim el panim with Israeli settlers. They seek “balance” and an explanation why Palestinians are treated this way, even though most have already heard rationales repeatedly offered for the status quo.

If there is a second side to this story, I answer, it must come from Israel’s government, not from settlers. The Israeli government gives its citizens license to establish settlements on foreign land it holds under military rule. The Israeli government applies two separate and unequal legal systems in Hebron: civil law for settlers, and military law for Palestinians. And I do not want to create false equivalencies or give a platform to those who would try to justify policies that I consider morally wrong.

In biblical times, Nathan rebuked King David for committing adultery with Batsheva and intentionally sending her husband Uriah to be killed in battle, without first waiting to hear David’s side of the story. (2 Samuel 12) When Jezebel had Naboth killed so that King Ahab could steal his vineyard, Elijah did not ask for King Ahab and Jezebel’s side of the story before condemning their abuse of power. These prophets fulfilled their sacred obligation to speak truth to power after bearing witness to injustice. And though I am no prophet, I take seriously Rabbi Abraham Joshua Heschel’s 1963 teaching: “Let there be a grain of prophet in every[one].” (Religion and Race speech)

T’ruah does not hold itself out as offering an all-encompassing or neutral perspective on the occupation. There are moral and practical limits to the number of _panim el panim_encounters we arrange on our excursions. I expect that some participants might chooseto return to Hebron to meet with Israeli settlers and learn more about their decisions to live there. I respect that choice. My hope is that, during those conversations, our participants will share with conviction, in ways they could not before, the consequences those decisions have had and continue to have on Palestinians and Israelis like Issa and Merphie. 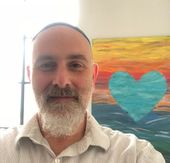 Rabbi Ian Chesir-Teran is the rabbinic educator in Israel for T’ruah: The Rabbinic Call for Human Rights.