When I was 18 years old, my parents kicked me out of our home because I failed to adhere to their standard of Jewish law. It was the summer of 2008, and we had lived together on a tree-lined street in Boro Park. The following summer, my parents’ marriage dissolved. They had been set up by a matchmaker as a “pairing off of damaged goods”; each of them struggled with mental illness. My mother was a roiling sea of diagnoses and menacing acronyms. She saw my early precocious behavior and later stubborn auto-didacticism as something suspicious, what their communities and spiritual leaders, friends, and rabbis all told them to fear and stamp out. When I clothed my insistent curiosity in blue denim and the black Baphomet-lined garb of the youthfully disaffected, it confirmed what my parents had seemed to have always known and never hesitated to act on: that I was not merely different but consciously adversarial to their way of life, a life ostensibly crafted in the shape of God’s will.

Our rabbis in yeshiva often spoke of shalom bayis (or shalom bayit). They would refer to Maimonides’ writings on Hanukkah, that lighting the Shabbat lamp (then oil, now could be candles) takes precedence over the Hanukkah menorah because it contributes to shalom bayit, “altz shalom bayis” as they would put it. (Laws of Hanukkah 4:14) I knew early on that my home — where unasked questions, untreated emotional realities, and deeply temperamental theologies held sway — was different from what the rabbis described as shalom bayit. From the time I was 8 years old, I saw the violent disordered chaos in my home. And eventually, I came to understand that I, too, because I rejected the strictures of the home, disrupted my family’s shalom bayit.

Though I couldn’t situate experiences of shalom bayit within my own home life, I came to learn about it in the homes of my father’s rabbinic colleagues. When my mother was in the hospital, my father had us eat our Shabbat meals with various, generally prestigious, rabbis he knew and their families. These other homes provided a prism through which I personally came to understand the concept of shalom bayit.

One Friday night, at the home of an avuncular and genuinely kind elderly and learned man, whom my father drove home daily, his wife brought out a very strange kugel. She was cheerfully diminutive, carrying a regular-sized pan but not a regular-sized kugel. Rather, the kugel was weirdly bifurcated: half featured the charred brown that spoke of potato kugel, which I certainly was wanting and expecting, and the other half was a bright amber orange, utterly alien to my still immature palate. I couldn’t help myself, and so I asked the rebbetzin about the dish. “Oh,” she replied brightly, “it’s shalom bayis kugel!” I remember laughing while they each explained that their variegated tastes for kugel achieved a symbiotic and to them delicious resolution when cooked together.

That kugel is what comes to mind when I think of the concept of shalom bayit — the rabbis who constructed the idea and the ultra-Orthodox communal structures that continue to rely on it to undergird their existence. Their lives are bifurcated like that kugel: the sublime and the absurd. 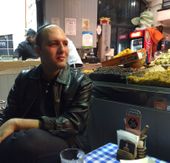 Israel Heller is a writer and activist living in New York City. He has spent time living and working in New Orleans, Tel Aviv, Bethlehem, and Jerusalem.