A windowpane shatters in Avrom Sutzkever’s prose poem “Green Aquarium.” Sutzkever (1913-2010) was the greatest Yiddish poet of the second half of the 20th century, and “Green Aquarium” is his most idiosyncratic work. The poem narrates a prophetic vision: The dead people Sutzkever has known — those who died in the Holocaust — appear to him through a crack in the ground.

First, the vision restores him: Green. Rebirth. Life. “The green of mossy stones in a rain…First green under melted snow in a circle around a blue wildfire.” But the poet peers deeper and the green becomes horror. “Death has embalmed them with green existence; they all swim in the green aquarium in a kind of silken, airy music.” Only a windowpane separates the living poet from the swirling, fishlike ghosts of his memory.

Sutzkever survived the Vilna Ghetto and he was a partisan in the forests of Lithuania. His first collection, Lider (Poems), was published in 1937. He used modernist rhymes and rhythms, but his subject was eternal: nature. “Green Aquarium” and the other prose poems later collected under that title were written in the early 1950s. Sutzkever’s poetry was turning from the natural world to memory and remembrance, and “Green Aquarium” marked a break from his earlier work and earlier life.

“Green Aquarium”* is often received as Sutzkever’s statement about the limits of poetry. The poet’s language can raise the dead, but only as long as the poem lasts; he cannot actually make a world come alive. Anything a writer summons is ephemeral. Sutzkever’s attempt to immerse himself in the green aquarium is destructive. In an imagined dialogue, the poet says: “This barrier will soon vanish…I’ll smash the green pane with my head.”

And the aquarium bursts and the vision vanishes. The world he conjured washes away. The link to the past is broken, gone. The writer has to abandon two dreams: living again with his lost loved ones and reviving them through words. His words — any words — lack the needed power. Words can only embalm.

Sutzkever is an artist of brokenness. Though he was fundamentally broken, he didn’t typically force us to dwell in his worlds and encounter chaos. Neither did he explore his psychological wounds or vocalize the broken. His lines are constrained and immaculately constructed; the rhymes surprise us. His poetry never exposes anything raw or unformed, which is why the decision to smash the pane is silently devastating. Like Moses, he chooses not to talk, but to strike. The act is impulsive and, while it leads to catastrophe, it’s also exhilarating and emotionally honest. Breaking is inherently violent.

Sutzkever’s words, most often, are like tempered glass, shielding us from the blows of the past. But here, Sutzkever abandons words. He announces his intent to strike; the aftermath is a silence that conveys what words cannot. In that absence, we understand the emotion of the wreckage. The best art is a kind of violence that forces us into a confrontation.

It seems somehow necessary that the word we use to describe the way out of emptiness is breakthrough. A breakdown ends with a breakthrough. Artists break with the past; they break with their earlier work. They emerge by breaking out. The same verb is used in the crisis’s beginning and its resolution. The hopeful edge of trauma and emptiness is that it cannot last. There are only two possibilities: collapse or escape. Sutzkever says that he wants to shatter the glass so that the barrier will vanish — but perhaps he wants the green aquarium to dissolve for other reasons, to be momentarily free of everything he experienced, to escape and to find a new equilibrium. The image of broken glass is a hopeful one: a Jewish wedding, a marriage, a new beginning. *Download the poem, “Green Aquarium” here. 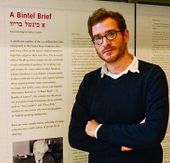 Eitan Kensky is Director of the Collections Initiatives at the Yiddish Book Center. He is co-founding editor of In Geveb (ingeveb.org), an open-access digital journal about Yiddish culture.