I woke up on my 50th birthday to the loneliest, most disconnected and painful day of my life. For decades — for as long as I could remember — I had felt as though I was a woman living inside a man’s body. Joy was not a feeling I could access in my despair. But that day, something clicked in me. I was tired of living an inauthentic life. I knew something had to change. That day, I made the monumental decision to begin my gender transition journey.

Neither personal anguish nor the denial of it defines my life any longer. I no longer focus on the exhausting and futile attempt to transform self-delusion into reality. My life has now blossomed into one dedicated to authentic, truthful, and genuine living. With this, I experienced a sense of joy I never imagined attainable. I realized that I possessed the secret to living a life of authenticity — catapulting past the fear, shame, and guilt that had accompanied a life where I was unfaithful to myself and enslaved to others’ expectations of how I should live.

Until my transition, my gender-identity dysphoria consumed most of my energy, my creative spirit, and my very life. My potential to be a more loving and compassionate person never stood a chance to develop. As a result, I lived a survival-based life characterized by fear, low self-esteem, and mistrust of others.

I lived with the false illusion — due, in part, to my insecurity and deep desire to feel included — that in order to fully express my Jewish identity, I needed to pledge my allegiance to an established movement. I understood Judaism to be a culture delineated strictly for males and females. And yet, I was determined not to spend my life as an outsider.

Once I began to engage and explore my Jewish identity, I entered the paradox of living with both rejection and encouragement. I sensed that the Jewish tradition, and those who represented it, would welcome me and support my exploration. However, I also sensed that if people knew who I really was, rather than the imposter that I projected, they would cast me aside. And once I began to address my gender identity dysphoria — as I began to transition — my journey became also one of spiritual healing. Now, first and foremost, I seek acceptance from God. No religion, government, culture, and surely no spiritual discipline can own another person’s soul. Hence, I no longer seek approval from others to live a life of truth. Rather, I dedicate my life to being in an honest relationship with my Creator, and, by extension, God’s beautiful world. I greet each morning in radical amazement as I say, “Modah Ani,” thanking God for believing in me enough to bless me with another day where nothing is taken for granted and everything is incredible. I have established a foundation, strong and stable, to build upon as I continue my soul journey.

Authentic living granted me a sense of self-worth as I became faithful to my own essence, my soul. It brought a joy of living; it birthed a “me” that I barely recognize at times. My journey became as much one of spirituality and healing as it was one of gender transition. I began to feel quiet inside, filled with a sense of harmony and gratitude. More important, though, I began to feel a part of the world rather than apart from the world.

My transition taught me that healing one’s brokenness means developing a different way of interacting with oneself and with the world. My gender transition empowered me to move from a defensive, reactive posture to a more proactive way of thinking, speaking, and behaving, flavored with gentleness, kindness, and compassion. 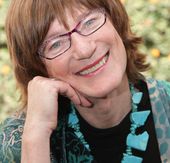 Yiscah Smith is the author of a recent memoir, Forty Years in the Wilderness: My Journey toAuthentic Living. She lives in Jerusalem, where she teaches Jewish spirituality at the Conservative Yeshiva, as well as online. She also provides private spiritual guidance for authentic living.