The story ends in tears.

The tears themselves were certainly bitter. But, surprisingly, they were shed over a source of great joy: the very temporary creation that was the beautiful body of Rabbi Yohanan, a person with the magical power to help heal Rabbi Eleazar. But, like all living things, Rabbi Yohanan’s body would also someday end up as dust, and it was over this that they cried.

The talmudic story of R. Yohanan’s visit (Brakhot 5b) underscores a strange and powerful thing we know about joy: It is often found during times of great uncertainty — even when our very existence is threatened. Illness, in particular, forces us to consider — and rediscover — the joy of what we value most. R. Yohanan begins his visit by asking his ill friend whether his sufferings are welcome to him — are they something to be embraced as a loving gift from God, a question that has troubled people of faith through the ages. R. Eleazer gives a surprising answer for an ancient religious leader — “Neither them nor their reward.”

Today, the idea of welcoming suffering may seem strange. But, in fact, we might sometimes embrace suffering as if it is a gift of love driving us toward the good and even the godly. The current Black Lives Matter movement, for example, is drawing attention to the suffering of oppressed minorities. Responding to that movement are campus protests among the young and privileged — expressions of rage and sometimes shame: “How dare I enjoy my life when others are suffering?” And, “My worries are just first-world problems.” This rage inspires people to work for social justice, taking personally God’s command: Tzedek, tzedek — justice, justice — you shall pursue. (Deuteronomy. 16:20)

A year-and-a-half ago, my wife and I made aliyah in the midst of the last Gaza War, a time of great uncertainty about the future. This uncertainty has resonance with the uncertainty faced by the early Zionists. They, inspired by the biblical call for tzedek, understood the establishment of the State of Israel as a way to establish justice in the wake of terrible crimes against the Jews. Among those early settlers in the Yishuv were spiritual Zionists like A.D. Gordon, who came to the land of Israel in search of joy. They saw Israel mostly as the place where they could live their lives to the fullest. So, too, did my wife and I choose to come here in pursuit of joy and a fuller life. As I write this, life is alive for us in one very poignant way: the birth of our first child mere days ago.

We are drawn to making Israel a more just land for all — Jews, Muslims, and Christians. We see our justice work as being intricately linked to our spiritual pursuit of joy. My professional work is also about that spiritual pursuit of joy. As a chaplain and an educator of chaplains, my work has become a spiritual practice that helps me to find joy even in the presence of suffering. When faced with dark and discouraging moments, I try to bring solace and hope. I direct my heart to a belief that it’s always worthwhile to offer new sources of hope when old sources have been broken or run dry. Even when there is no hope of life, I try to connect the people I work with to the awesome beauty that is Creation. Joy, then, is being able to walk through life knowing that what’s in the interest of others is what brings joy to us. Maybe it’s about being able to see that getting in touch with our prophetic anger at injustice is only a first step on the way to healing our broken world. We need to heal ourselves, too, by unifying our interests in justice, and, in joy.

In the coming months, God willing, my wife and I will go with our new daughter to the American consulate to get a passport. For a birthplace, the American government will list Jerusalem, a name whose root is shalom/salaam — meaning wholeness. But in a sign of how broken our world still is, government officials will list no country, as if Jerusalem is a city disconnected from the world. Though I will likely feel pained looking at that lonely name, mostly I expect to feel joy — and a sense of hope that peace will ultimately come when we are able to love our joy more than our suffering. 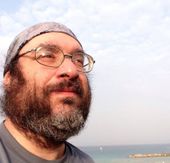 Rabbi Alan Abrams is director of the HavLi Center for Spiritual Care Education and Research at the Schwartz Center for Health and Spirituality in Jerusalem.