Hate permeates political discourse and many aspects of our daily experiences. We encounter overt or nuanced forms of hate in the street, in the workplace, and in politics. That hate is even extended to complete strangers, those we fear will impede our agendas or whose opinions we abhor. Although it may feel as though hate-filled speech and experiences are reaching new peaks in intensity, this condition is not new.

The Talmud (Yoma 9b) attributes the destruction of the Second Temple in 70 C.E. to sinat chinam, the gratuitous hatred of an entire generation who were otherwise upstanding citizens involved in Torah study, mitzvot, and good deeds. Although we tend to associate the ugliness of hate with wicked behavior and associate people’s hatred with compelling reasons, this was not the case. The talmudic sage Rabbi Eliezer described the phenomenon: “People who eat and drink with each other, and stab each other with verbal barbs.” So, how are we to reconcile such hatred by people otherwise engaged in good behavior, and how are we to understand what is gratuitous about it?

Rabbi Eliezer Papo, in his 19th-century guide to ethical living, Pele Yoetz, writes that every type of hate is called sinat chinam because any arguments or justifications we generate for our hate are ultimately self-delusions. Papo doesn’t explain why justifying hate is delusional, but the work of contemporary psychologists in understanding moral judgment may clarify it. We use two types of cognition: intuition and reasoning. Intuition is subtle, emotive, and happens with rapid flashes of moral judgment that occur effortlessly. In contrast, reasoning is a controlled and deliberate assessment process, heavily influenced by our intuition, that leads us to generate post-hoc justifications for our initial judgments. In fact, tiny flashes of disgust, disdain, or anger can lead us to dislike something even before we know what it is. This rapid and unconscious process may shed light on sinat chinam: our justifications for hate are delusional because they are formulated to support our initial intuitive judgments. We become convinced by our own arguments, and, in turn, what began as an unconscious flash of dislike becomes entrenched hatred. And as society distills into more fragmented partisan arenas, it becomes harder to step outside of one’s own internal justifications and arguments.

How can we move beyond sinat chinam and work toward healing our society? Our moral judgments are quick and intuitive, but these flashes of affect can be transient. Learning to pause after an initial judgment, reflect, and (re)consider our opinions in light of other perspectivesis essential. Listening to others, reassessing our claims of certainty, and developing empathy are initial steps to healing sinat chinam.

The Talmud concludes that no amount of mitzvot can remedy sinat chinam, only its counterpart: ahavat chinam (gratuitous love). This means developing a frame of mind that is magnanimous, forgiving, and compassionate. Mathieu Ricard, a French scientist turned Buddhist monk, suggests that, just as we invest time in exercise for a fit body, we need to dedicate time daily to cultivate compassion and benevolence. If we do so, we reduce our inclination for hatred. 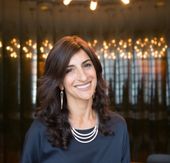 Rabba Dina Brawer was born in Milan, Italy, and recently received Orthodox s’mikhah from Yeshivat Maharat in New York. She founded JOFA UK as a platform for communal discussions around religion and gender, and she produced #YourTorah podcast, a journey to discover Mishnah. As one of Hillel’s OOI Rabbinic Entrepreneurs, she is looking forward to building an intentional Jewish community in Boston, where she recently relocated with her family. photo by Jackson Krule.